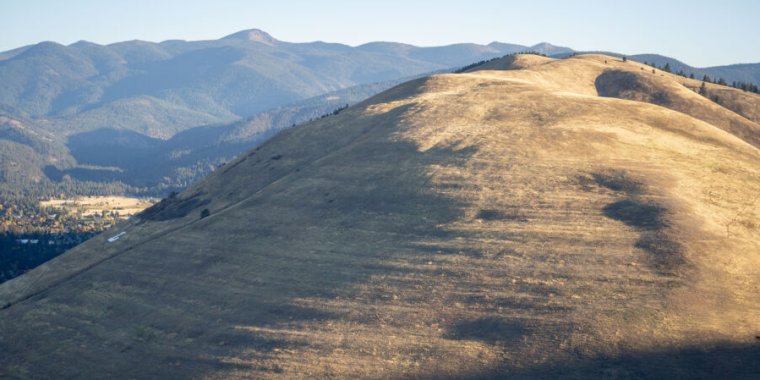 Had the city of Missoula, Montana, existed thousands of years ago, it would have been under water.

During the last Ice Age, a sheet of ice 20 miles wide got stuck in the Idaho panhandle and blocked the Clark Fork River, creating glacial Lake Missoula. At its highest, the water level reached 4,250 feet above sea level—over 1,000 feet above the present city’s altitude. The ice sheet ultimately gave way to the pressure of the water, and glacial Lake Missoula drained catastrophically.

It’s estimated that the biggest flood discharge reached 386 million cubic feet per second. At that rate, it took the lake only a few days to drain, with its waters eventually reaching the Pacific Ocean.

The scariest thing is not the scale of this event—it’s that floods of this size happened multiple times. Thousands of years after that first flood, scientists finally pieced together whether it was a one-time deal by looking to the dirt for answers.

Signs of the past

In the fall of 1969, Rich Chambers drove southwest of Missoula along I-90 with his undergraduate adviser. They pulled over to the side of the road to look at a wall that ran 80 feet into the air. It was zebra-striped, with layers of dark and light sediments running horizontally up the slope.

Missoula is the second-biggest city in Montana, with a population of about 75,000, and it sits in a mountain valley. The University of Montana is known more for its forestry and law schools and less for the giant boulders sitting around campus or the lines on two mountains—visible from about anywhere on campus—that are remnants of the lake that once drowned the valley.

Chambers devoted his undergraduate and master’s work to glacial Lake Missoula, which formed behind the Cordilleran Ice Sheet between 14,000 and 21,000 years ago. The glacial lake would cover almost 3,000 square miles and hold as much water as Lake Ontario and Lake Erie combined.

Chambers’ adviser was David Alt, a well-renowned historian of glacial Lake Missoula. Something Alt wasn’t as familiar with, though, was the sediments left behind after the flood drained the lake—the sort of sediments that he and Chambers found themselves looking at off I-90.

“These are Lake Missoula sediments,” Alt said to Chambers as they stared at the zebra wall. “And nobody’s looking at them in detail.”

If there was to be anything new uncovered about the lake’s history, it would come from sediments like these. And there was some urgency in uncovering it—in the 1970s, there was a big back-and-forth brewing in the scientific community regarding how many times the lake may have drained and refilled.

Land of many lakes

Chambers started classifying Lake Missoula’s sediments and noticed two scales of zebra striping. On the large scale, he found about 40 alternating light and dark soil sequences up to several meters thick. These cycles, called rhythmites in geology-speak, are deposits where the light layers are made up of fine sand and silt deposited by rivers in the early stages of a lake’s filling, while the dark layers are made up of silt and clay that gather on the bottom of filled lakes.

Chambers then noticed that the dark layers had their own zebra stripes. The stripes-within-stripes at this scale are called varves, and they likely represented annual layers of sediment stacked on top of each other. The varves told geologists about the amount of time it took for the lake to fill. Assuming the varves represented annual stackings, Chambers said it took only an average of about 50 years for the lake to refill. Even though the lake’s depth decreased with each filling, that’s still a wild amount of water. At its peak, it was more than 500 cubic miles of water, about half the quantity held in Lake Michigan.

Bit by bit, Chambers and Alt pieced together a picture of the area’s history. In a paper that Chambers and Alt co-authored, they suggested several decades might have passed between each lake draining and filling; in a different paper, Chambers concluded there was no evidence that the glacial lake had drained completely each time. He later argued that the last several lake drainages were less intense, which kept the floods from washing away deposits like the one seen at the roadcut on I-90.

That piece of land off the highway contains at least 800 years of history—and possibly more. It’s unclear how much sediment may have been removed from the record by subsequent floods. Each draining of glacial Lake Missoula could have taken with it evidence of earlier floods.