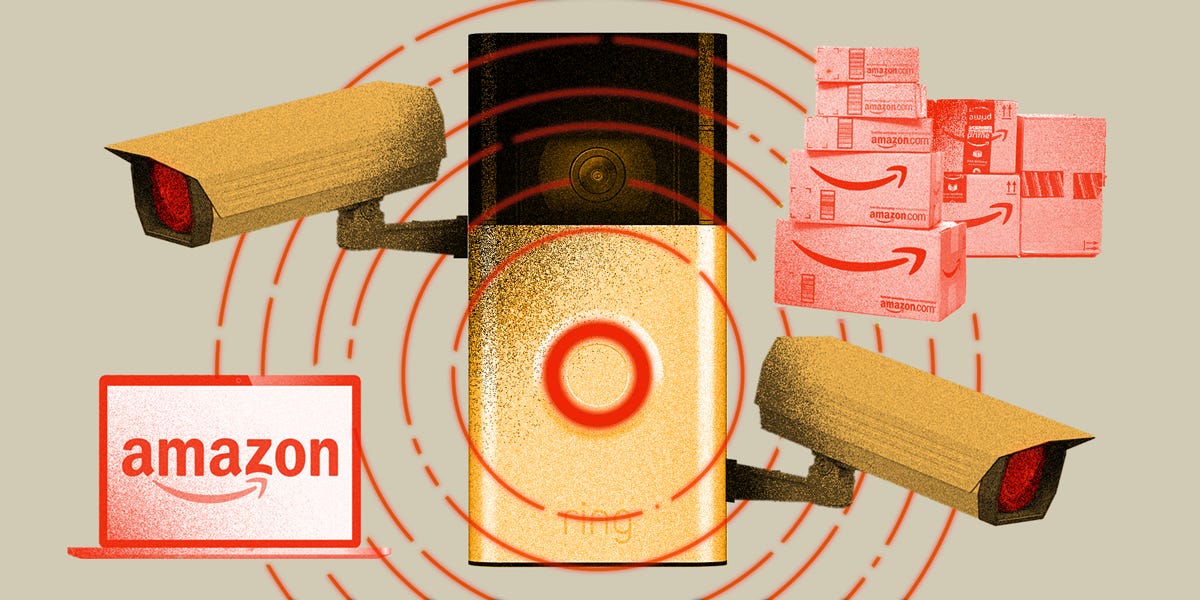 Amazon’s recent multi-billion dollar purchases of One Medical and iRobot have spurred concerns from legislators, antitrust advocates, and privacy experts, but the company’s sprawling business model — and reputation of surveilling consumers and competition alike — makes the company almost unstoppable. It’s “like the mythical Hydra, where you cut off one head and two more grow in its place,” one data privacy expert told Insider.

Every step of the way, from its beginnings as an alternative to brick and mortar bookstores to snatching up over half of the online retail market, Amazon has relied on surveillance to dominate the competition, according to Evan Greer, director of the nonprofit advocacy group Fight for the Future.

“People tend to think of Amazon as an online marketplace, but really, Amazon is a surveillance company,” Greer told Insider. “[E]very aspect of their profit is derived from their ability to amass and leverage data.”

Amazon’s surveillance of its employees is well-documented, from its “time off task” metric that measures productivity to monitoring its delivery drivers with AI cameras. Such strict standards that employees report being scared to take bathroom breaks, lest they fall behind, drivers and warehouse workers have reported.

Watching the competition — and you

Consumer data is especially valuable — a 2019 Forbes report indicated it’s the most valuable to businesses — and Amazon makes extensive use of it.

Every click on the website, whether you decide to purchase an item or not, collects data on consumer behavior and tells the tech giant if you check reviews or price shop before completing a purchase and which ads you interact with, in addition to details like your payment information and address.

“Amazon has all this data available,” Greer told The Guardian. “They track what people are searching for, what they click, what they don’t. Every time you’re searching for something and don’t click, you’re telling Amazon that there’s a gap.”

The data Amazon has access to is not limited to its retail site. The tech giant can also collect information about what movies and television you watch on its Prime video platform, what books you read or listen to with its ownership of GoodReads and Audible, what podcasts you listen to through Wondery, what games you play on Twitch, your online browsing history through Eero wi-fi systems, and even what groceries you buy through Whole Foods and Amazon Fresh locations.

“This all works together because Amazon is trying as best they can to funnel information about its customers’ lives, about their spending habits, about their eating habits, sleeping habits, their shopping habits,” Ron Knox, a senior researcher and writer for the Institute for Local Self-Reliance — an anti-monopoly nonprofit that gives tech assistance to community businesses — told Insider. “They’re tracking all this data so that they can better sell us things. That’s what Amazon wants to do, that’s what its monopoly is based on.”

The impact of surveillance capitalism

The companies and services Amazon owns have long prompted concerns about data privacy. For instance, the Ring doorbell camera (acquired by Amazon for $1 billion in 2018), which records activity outside of consumers’ homes, partners with thousands of police departments. The company has shared recordings with law enforcement without warrants in some cases, Politico reported.

The ever-listening Echo, which acts as a personal home assistant and responds to voice commands, allegedly collects data without users’ consent to target ads. Its recordings can be used in court.

Recent purchases of One Medical and iRobot, which creates Roomba robotic vacuums, mean Amazon has information available about consumers’ health care and will soon have the ability to map the inside of their homes. These purchases — totaling $5.6 billion in acquisitions within three weeks of each other — expand Amazon’s reach into consumers’ daily lives.

“It goes so far beyond what we typically think of when we talk about like surveillance capitalism, like scary ads and algorithms, etc,” Greer told Insider. “We know they sell devices that record audio and video in and around our homes and offices and schools and hospitals and abortion clinics and therapists’ offices. So the extent to which Amazon is conducting surveillance in almost all of its activities, it’s hard to overstate.”

Amazon declined Insider’s request for an interview or to answer questions regarding data privacy concerns.

“Amazon, it’s sort of like the mythical Hydra, where you cut off one head and two more grow in its place,” Greer said, when asked what could be done to stop the company’s sprawling growth.

The company uses data from its marketplace retailers and competitors to further add to its value, currently estimated at $1357.19B.

“They are killers,” Jason Boyce, the founder of Avenue 7 Media, an agency that helps sellers maneuver the Amazon marketplace, told Insider. “They’re absolute killers, they have no conscience when it comes to going in and eating up as much market share as possible.”

With its massive warehouse infrastructure and ability to manufacture branded products, Amazon has developed a strategy of undercutting small businesses’ prices — creating Amazon-brand knockoffs of hot selling items offered by smaller retailers at a lower price — that has led to a widespread fear of “death by Amazon.”

“The way that Amazon engages and kind of copy and kill self preferencing, where they’re basically leveraging their business place surveillance to edge out small businesses, makes it impossible to compete with the products that they market on their own platforms,” Greer told Insider.

The legal case against Amazon

Though Amazon has not been labeled as a monopoly by the Federal Trade Commission, it does hold 56.7% of the market share for purchases made online and uses its massive mergers and acquisitions to maintain market dominance. When a company has a true monopoly it has no competitors and has the ability to raise prices indefinitely, giving consumers no alternative and curbing innovation so new products aren’t introduced to the market.

“The piece for people that’s hard, I think, for people to understand is is the scale of monopoly power and abuse and that the harm of Amazon data collection is not just the added up individual harm of the surveillance of the ring cameras,” Greer said. “It’s the way is that all of those pieces, then, kind of coalesce into a company that is becoming sort of unstoppable and threatens to gobble up almost every traditional institution that we rely on —  from web hosting to hospitals and the entire medical industry, to books, to the auto industry.”

Creating a ubiquitous business was part of the original plan founder Jeff Bezos set forth when creating the platform in 1994. Early Amazon employees were quoted in a 2012 Forrester report saying Bezos’ “underlying goals were not to build an online bookstore or an online retailer, but rather a ‘utility’ that would become essential to commerce.”

Two tech antitrust bills — S. 2992 and S. 2710, which propose rules that would prohibit dominant digital platforms like Amazon from discriminating against competitors, restrain self-preferencing business practices, and ensure consumers have access to competitive app ecosystems — are currently making their way through Congress, in part as a response to Amazon’s growing market share.

“[The bills are] not going to end all of Amazon’s harms and abuses, but it’s one kind of head that can be lopped off and burned with the torch so it doesn’t grow back,” Greer said. “And then there’s others that we need to tackle through a strong federal data privacy law that would crack down on so many of the different aspects of Amazon’s privacy invading devices and their surveillance partnerships with police and so much more. We need to see action at the local and state level.”