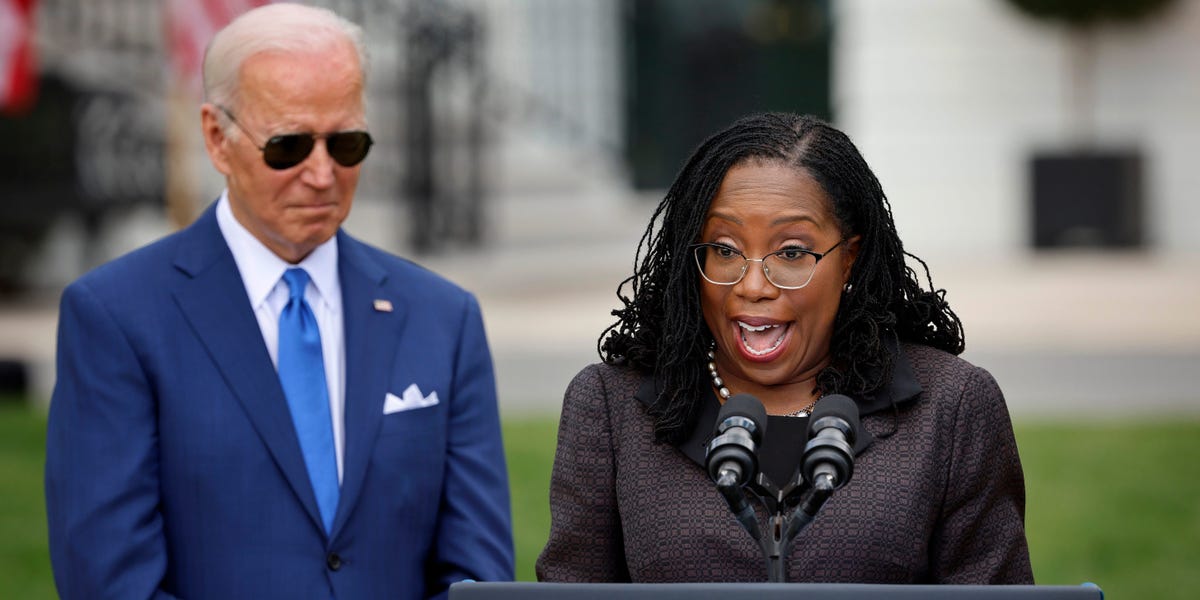 In his whirlwind summer of accomplishments, one of President Joe Biden’s most important may have been overshadowed by news of war, inflation, fights over abortion rights, and the FBI search of Mar-A-Lago. Biden has appointed more judges to federal courts at this point in his tenure than any other president since John F. Kennedy.

As of August 8, 2022, exactly 566 days into Biden’s tenure, the Senate had confirmed a record-setting 75 judges nominated by Biden to federal courts, according to a tally from the Pew Research Center.

That’s more than Donald Trump, Barack Obama and George W. Bush had confirmed by this point in their presidencies as well as other presidents after JFK who remains the record holder for speedy nominations at this point in their tenure with 102. The overall number of Biden judicial nominees confirmed by the Senate stood at 78 as of August 26, according to UScourts.gov. That includes appeals and district court judges, along with one Supreme Court justice.

Biden’s nominations have also included a historic number of women and racial and ethnic minorities. Most notably, Ketanji Brown Jackson, the first Black woman to be nominated and confirmed in a bipartisan vote for the Supreme Court.

In early August, when the Senate confirmed Indian-American lawyer Roopali Desai, to serve as a Circuit Judge for the Ninth Circuit, Majority Leader Chuck Schumer highlighted the significance of her confirmation in creating a more diverse court.

“​​Not long ago, a nominee like Ms. Desai would have been rarely seen in the Senate, but under President Biden, the Senate is confirming more and more nominees that break away from the norm: over 75% of President Biden’s nominees are women, and nearly half are women of color,” Schumer, a New York Democrat said on the Senate floor on August 4.

Schumer, whose office did not immediately respond to Insider’s request for comment, continued, “Now people say, well, why shouldn’t it be the same percentage as the population? Well, that’s what we’re trying to get to, but we’re way behind and putting more women and people of color on the bench gets those percentages a little closer to the American norm. But we have a ways to go.”

Due to the nature and speed of judicial nominations, they are often an accomplishment for presidents that fly under the radar. However, they hold a great stake in establishing a long-lasting and consequential legacy for presidents even after they have left office. For Biden, who has relied heavily on Schumer’s maneuvering to accomplish his agenda, his judicial accomplishments build on his summer wins that have followed months of stubbornly unfavorable polling.

Biden benefited from a 2019 rule change by then-Majority Leader Mitch McConnell that cut the debate time on most judicial nominations from 30 to two hours. The decision by McConnell, a Kentucky Republican, to invoke the “nuclear option” allowed for lawmakers to confirm a nominee with a simple majority vote, ultimately allowing for multiple judicial vacancies to be filled in one day, according to the American Bar Association. Democrats who were in the minority at that time objected to the rule change, but it has now aided in fast-tracking Biden’s lifetime judicial appointments.

“The importance is that it is one of the biggest legacies he will leave because these judges will be making decisions long after Joe Biden has gone, long after his administration has gone, he will still have the stamp of these judges on American policy,” Elaine Kamarck, a senior fellow in the Governance Studies program and director of the Center for Effective Public Management at the Brookings Institution told Insider.

The Biden administration has been on a hot streak in recent weeks with a number of groundbreaking legislative victories including the passage of the Inflation Reduction Act and the CHIPS and Science Act.

Michael Cornfield, a political scientist and associate professor of political management at The George Washington University Graduate School of Political Management, said Biden’s judicial accomplishments have been overlooked but are not the most important.

“It’s certainly been overshadowed by the bigger stories in the news, but I would not count it as a major accomplishment of his presidency to date,” Cornfield said in an email to Insider.

Instead, Cornfield contends that Biden’s legislative efforts are way more important than his judicial victories.

“I’d also rank those judicial appointments below his foreign policy achievements, notably rallying Europe to join the US in arming Ukraine and ending US military involvement in Afghanistan (as ugly as the withdrawal was),” Cornfield said.

“I do think Biden deserves credit for nominating so many women and persons of color to these posts, including, of course, Supreme Court Justice Jackson,” he said.

According to Balls & Strikes, a nonprofit commentary organization sponsored by Demand Justice, a progressive advocacy organization focused on the court system, 67.4% of Biden’s confirmed judicial nominees have been people of color and 70.5% have been women.

The tricky thing with analyzing the number of judicial nominations, Cornfield told Insider, is the timing.

“The problem with these kinds of statistics, in my opinion, is that they come at random times,” Cornfield wrote. “Let’s see where Biden ranks at the end of this Congress and the end of his term.”

The White House did not immediately respond to Insider’s request for comment on his judicial wins and what they mean for his legacy.

Trump finished his 4-year term in January 2021 with the overall second fastest confirmation pace of any US president with 234 Article III judges and 54 Court of Appeals judges. Jimmy Carter holds the overall record for the most federal court confirmations during a presidency. Carter’s 266 appointments surpass George W. Bush’s 204 and Bill Clinton’s 203, according to the Article 3 Project’s judiciary tracker.

Trump also managed to send three justices to the Supreme Court during his presidency — Neil Gorsuch, Brett Kavanaugh, and Amy Coney Barrett — solidifying the court’s conservative bent. With no term limits for federal judges or justices, carrying out the legacy of the whoever nominated them typically outlasts any president no matter how many terms they sit in the Oval Office.

On one side of Pennsylvania Avenue, Biden has Schumer. On the other, right within his White House, Kamarck of the Brookings Institution said, Chief of Staff Ron Klain has been instrumental in the fast pace of judicial confirmations. Klain has decades of experience shepherding judicial nominees, including the now-deceased Justice Ruth Bader Ginsburg in 1993, and being a savvy go-between the White House and the Senate.

“The White House has clearly prioritized judicial appointments — as they should — because we’ve seen Republican White Houses do that in the past and look what happened,” Kamarck said. “They have a Supreme Court that is definitely more conservative than the nation.”

When asked about the significance of Biden’s diverse nominations, Kamarck said Biden is “just correcting a lot of past mistakes or past wrongs.”

As far as accomplishments for a president go, Kamarck said that this will “echo through the decades.” Although it isn’t regularly covered in the news nor does it “attract headlines,” it gives presidents what Kamarck called a “sort of insurance policy.”

The prioritization of appointing not only a record number of federal judges, but a diverse group to courts across the country is a legacy that will long last for the president.

“It’s a pretty big deal or as Biden himself once said, it’s a big effing deal,” Kamarck said.