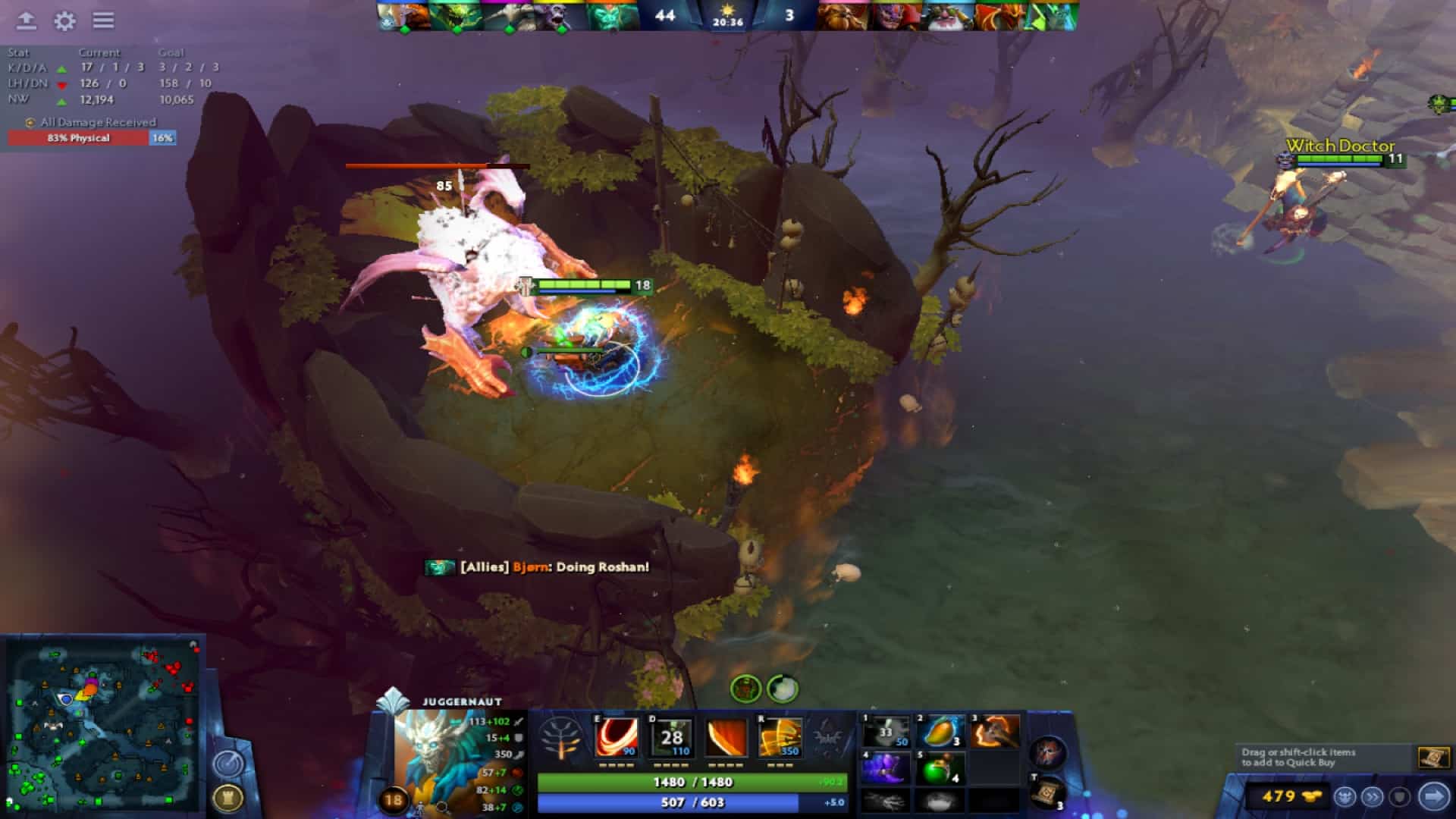 Learn how to beat Roshan 1v1 to claim the Aegis of the Immortal in Dota 2.

The 5v5 games of Dota 2 can be a thrill for gamers. Millions of people play Dota 2 to get better with the heroes and take out their enemies in action-packed combat. From taking on waves of creeps on a lane to using spells that deal devastating amounts of damage, there are plenty of things to do in the game. Among the long list of creeps that you can fight, Roshan is the strongest.

Roshan can be found in a pit in the river that connects the mid lane to the top lane. The ancient neutral creep can perform physical attacks, block spells from enemy heroes, bash opponents with his hits, and slam the ground to stun nearby enemies. 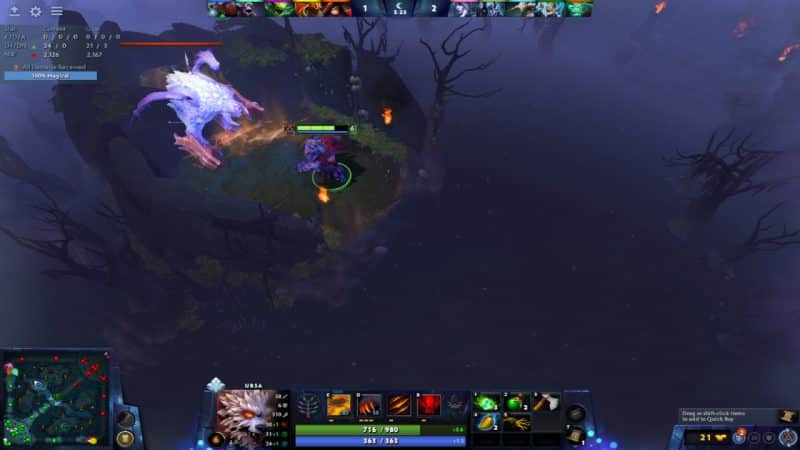 Roshan is the first neutral creep to spawn in the game. He is nearly unbeatable during the early and mid game. Most heroes fail to fight Roshan 1v1 due to the sheer stats and abilities of the ancient neutral.

You need to be able to tank a high amount of physical damage to kill Roshan. The ancient neutral creep has 6000 HP and 75 attack damage. It gets harder to slay Roshan with each passing minute in the game.

There are various limitations when it comes to attacking the ancient neutral creep. Unlike most other locations on the map, you cannot see inside Roshan’s pit without walking into it. You cannot plant Observer Wards and Sentry Wards inside the pit.

However, you can use certain spells like the Beastmaster’s Call of the Wild Hawk and Clockwerk’s Rocket Flare to scout for any enemies near Roshan’s pit. You can also use Scan to detect any heroes that are around Roshan and are about to attack him.

Roshan can be killed to obtain the Aegis of Immortal, an item that grants its user the Reincarnation ability. He can respawn after about 10 minutes after he has been defeated by either the Dire or the Radiant.

Heroes that can beat Roshan 1v1 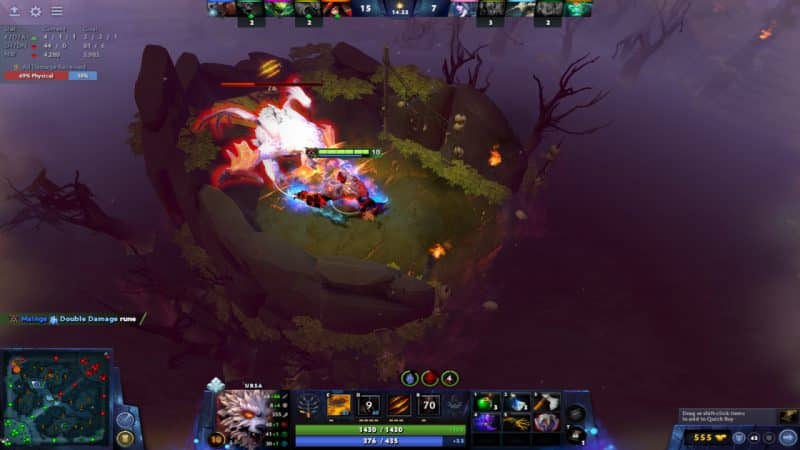 Ursa is a melee hero who is known for taking out Roshan with his bare hands. The Agility hero has a specific set of skills that can weaken Roshan with every hit. If you’re aiming to kill Roshan with Ursa, you can max out Overpower. It will let you strike Roshan with 6 consecutive attacks that can deal exponential damage when Fury Swipes is activated.

Enrage, the ultimate ability of Ursa, reduces incoming damage from Roshan by 80%. It also provides 50% Status Resistance for 5 seconds. You can use Enrage and Overpower as many times as you can to destroy Roshan in his pit.

Vanguard is an item you must equip Ursa with before facing Roshan in the game. It absorbs a portion of the damage dealt by Roshan during the fight. You can also purchase Morbid Mask to gain Lifesteal from each hit. Ursa can use Overpower with Morbid Mask to replenish his health quickly, increasing your chances of defeating the ancient neutral without dying in the process.

Many Dota 2 players who choose Ursa head towards Roshan by the time they reach level 10. The Agility hero is one of the best picks to defeat Roshan in 1v1 combat.

Anti-Mage is an outstanding carry hero capable of bringing Roshan to his knees. The melee hero gains 2.8 Agility for each level that he advances. You’ll need to farm core items for Anti-Mage before approaching Roshan.

Increasing the attack speed of Anti-Mage is a key element that can help you win over Roshan. You can buy Power Threads and Manta Style to increase his Agility stats early in the game. Manta Style will add 26 Agility and 12 attack speed to Anti-Mage. He can also create illusions of himself that deal 33% of his attack damage to Roshan for 20 seconds. These illusions can take amplified damage from Roshan during the fight.

If you have a Butterfly in your inventory, you won’t have to worry about dealing with Roshan. The fight against Roshan can be reduced by several minutes after buying a Butterfly for Anti-Mage. Butterfly will provide 35 Agility, 30 attack speed, and 25 attack damage. It also gives a 35% chance to evade incoming attacks from Roshan.

Sven can be a threatening force in Dota 2. The Strength hero has a base attack damage of 63 – 65 and a base movement speed of 325. The durable stats of Sven make him a worthy adversary for Roshan. Sven can stun Roshan with Storm Hammer and use Warcry to gain 15 bonus armor.

God’s Strength, the ultimate ability of Sven, provides a massive 200% increase to his attack damage. You can purchase a Daedalus to further boost his damage-dealing ability. Daedalus offers 88 attack damage and gives Sven a 30% chance to deal 225% critical damage on his physical attacks.

You can purchase an Echo Sabre to drastically increase the attack speed of Sven. The Echo Strike ability can be especially useful for melee heroes as it lets Sven strike twice in quick succession. It has a cooldown of 6 seconds.

If you find it a challenge to beat Roshan with Sven, you can buy and equip Satanic for Sven. Satanic provides 38 attack damage, 25 Strength, and 25% Lifesteal from his physical attacks. You can turn on Unholy Rage at any time to provide a 150% bonus Lifesteal to Sven for 6 seconds. These items can make it easier to pulverize Roshan in the pit to claim the Aegis of the Immortal. 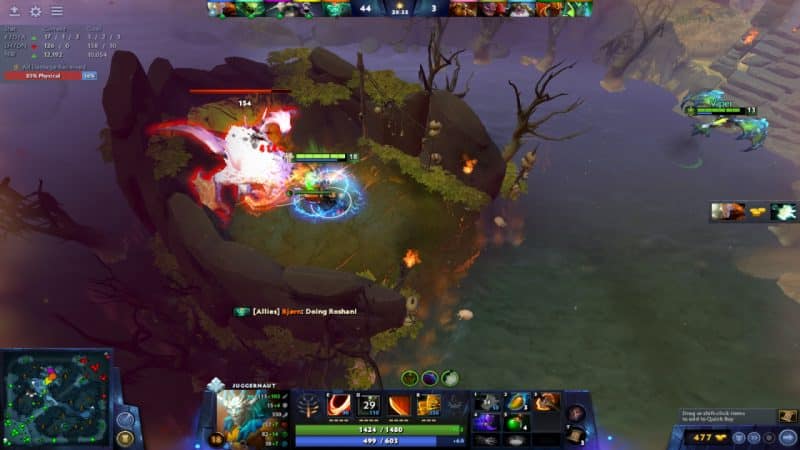 Juggernaut can slash creeps and heroes to bits with his blades. His abilities are suited well to let him fight Roshan head-on. Juggernaut is among the best carry heroes in the game. His ability, Blade Dance, can rip Roshan apart with an ongoing onslaught of critical attacks.

Blade Dance can deal 180% critical damage to Roshan from his physical attacks. He also gains 40% Lifesteal from Blade Dance at level 20 from his Talent Tree. You can equip Mjollnir to increase the attack speed of Juggernaut by 70 and provide 24 attack damage. Applying Static Charge on Juggernaut while battling Roshan will give the Agility hero a 20% chance to deal 225 damage per strike to the ancient neutral.

Juggernaut can use Healing Ward to regain his health during his skirmish against Roshan. Healing Ward lasts for 25 seconds and provides 5% of his maximum health as regeneration. It has a 60 second cooldown in Dota 2. 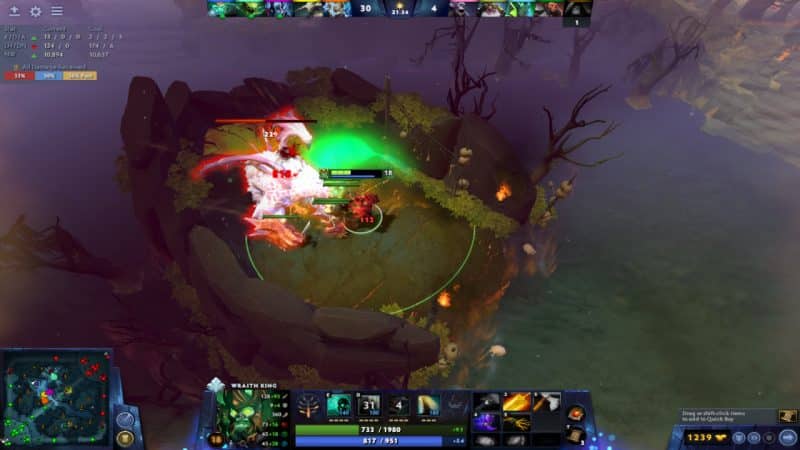 The Wraith King is a destructive hero in the game. He has a high potential for tanking damage from incoming attacks. The Strength hero can stand his ground while fighting Roshan in the pit. Mortal Strike provides a 270% critical damage on his physical attack every 4 seconds. It can be further reduced to 2 seconds at level 25.

Vampiric Spirit grants the Wraith King a 30% Lifesteal from his strikes. You can also summon up to 8 skeletons using Vampiric Spirit to assist you in decimating Roshan. If you happen to be struck down by Roshan during the fight, the ultimate ability of the Wraith King, Reincarnation, lets him respawn inside Roshan’s pit within 3 seconds to finish the fight.

For the game guides, the latest esports news and even Dota 2 betting tips, follow us here at ESTNN.