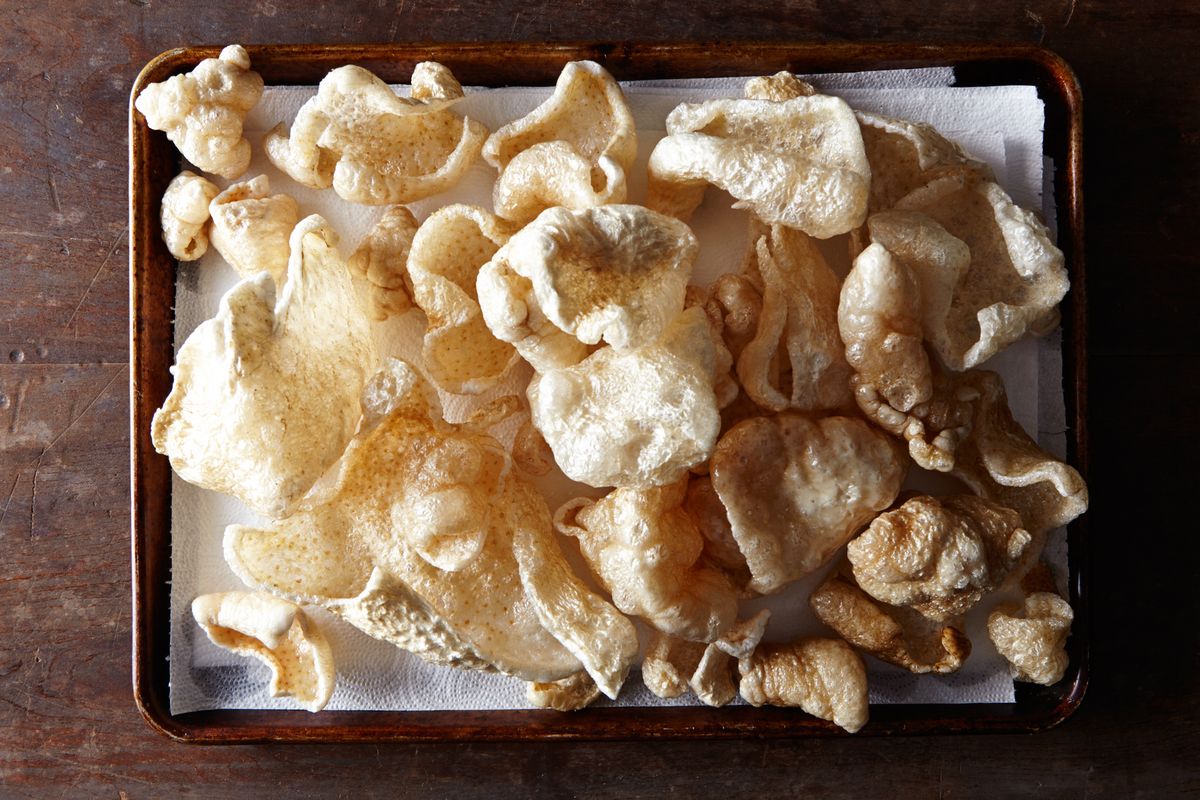 Cara Nicoletti of The Meat Hook helps us get to know our favorite cuts of meat a little bit better—and introduces us to a few new ones, too. Read on, study up, then hightail it to your nearest butcher.

If former articles in this column are any indication, it’s pretty clear that I think crispy skin is the tops. Frankly, we’re all for crispy everything but today we’re here to talk about homemade chicharrones. Chicharrones are a traditional Spanish dish consisting of fried pork belly or pork rinds. It’s as delicious as it sounds. We’ve talked about getting our pork skin crisp while cooking pork belly, and then again later with pork shoulder and chops. We’ve talked about crispy skin while spatchcocking and beer-canning our chickens, and à l’orange-ing ducks, and maybe we snuck some of the gribenes out of our apple and onion schmaltz to snack on, too. (I’m not here to judge.)

Crispy skin is usually the icing on the (meat) cake of a good recipe, but because the universe is ultimately kind and generous, crispy skin can also be the main event. To make this happen, go to your butcher and get a nice slab of pig skin. The perk of this crispy treat is that pork skin is inexpensive because it’s an all-too-often underappreciated part of the pork universe. It’s also a great way to make use of a part of the pig that is often looked over. Pick up some lard to melt and turn into hot oil for frying while you’re there, and voilà! You now have everything you need to make yourself a satisfying and insanely addictive crispy skin snack. Are you hungry yet? Let’s get started. Here’s what you need to make chicharrones at home, and how to do it without causing a grease fire.

The list of ingredients you need couldn’t be simpler and can likely be purchased at most grocery stores (just ask your butcher). You’ll need one large piece of pork skin, trimmed of fat (totaling about two pounds). You’ll also need one quart of pork lard or neutral oil for frying (you may not need this much, but you want to keep your oil clean in between batches).

Pork skin has so much flavor on its own, but you know what’s really good? Chicharrones with the juice of one lime, a sprinkle of salt (about two teaspoons, and chili powder (anywhere from ¼ to ½ teaspoon will do the trick, depending on your spice tolerance.

Ask your butcher to find you pork skin that is as hairless as possible. Gross to think about, I know, but you’ll thank me later. The parboiling will help get rid of whatever hair remains. If your skin still has a large cap of white fat on it, use a sharp knife or bench scraper to remove as much as you can. This won’t break down during the cooking process and will remain tough and chewy. And who wants that when all you’re here for is that signature crispiness? Place the skin in a stockpot and cover it with about four inches of water, then place a plate on top of the skin to keep it below the water. Cover the pot and bring the water to a rapid boil. Lower the heat slightly, and gently boil the skin for two hours, checking occasionally to make sure there is still water in the pot.

After two hours, remove the skin using a slotted spoon or tongs and allow it to cool until you’re able to handle it. Gently remove any white fat that’s left (this will be much easier now that the fat is softened from boiling).

Set your oven to the lowest setting (usually that’s around 200° F), and dehydrate the skin for eight to 10 hours. (Of course, if you’re lucky enough to have a dehydrator, use that!). The skin is done when it’s brittle enough to crack cleanly into pieces. Once the skin is at this point, fill a pot with about 4 inches of melted lard or frying oil and heat it 400° F.

Then you fry them up: Crack the skin into small pieces—roughly one-inch squares—and fry them one or two at a time, poking them until they puff up and turn golden brown. Transfer to a baking sheet lined with paper towels to drain, and once they’ve cooled slightly, squeeze the juice of one lime over them and sprinkle with salt and chili powder.

It goes without saying that these are best enjoyed hot and crispy, straight from the fryer. Cooking the chicharrones is the dictionary definition of a labor of love, so you might as well eat the fruits, err pork skin, of your labor when it’s at its best.

Chicharrón with Lime and Chili Salt

See the full recipe (and save it and print it) here.