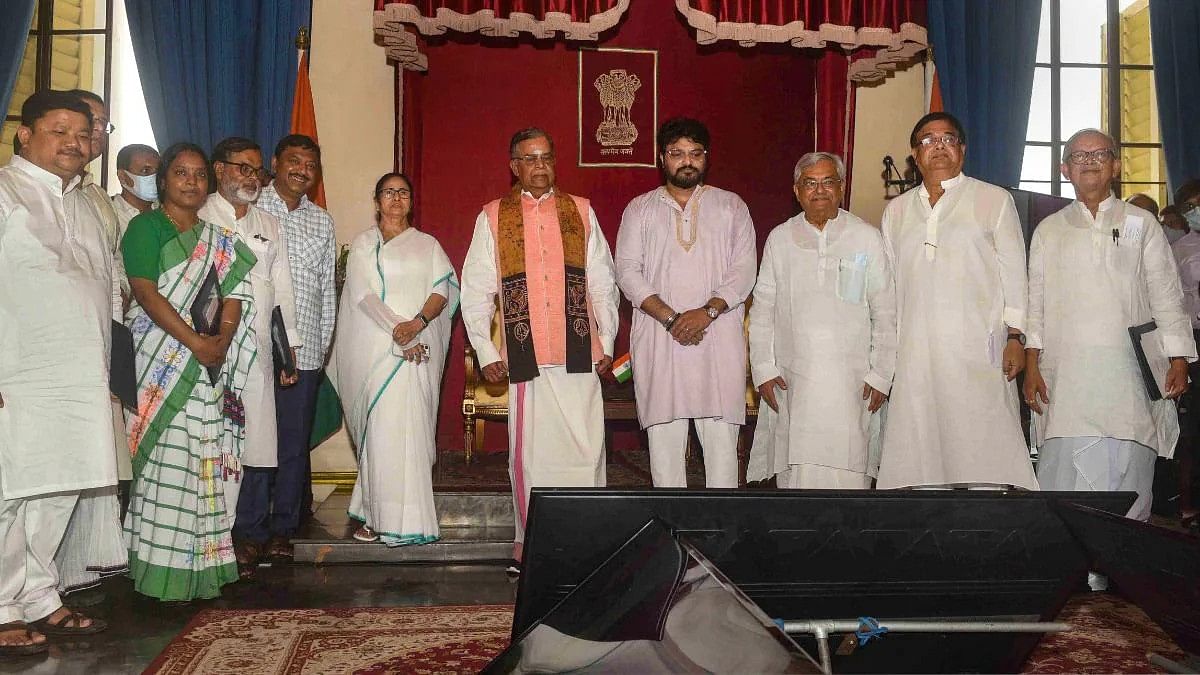 She inducted eight ministers — five cabinet ministers, one minister of state (MoS) with independent charge, and two MoSes — and dropped four. Among those axed was Minister of State for Education Paresh Adhikari, who is being investigated by the Central Bureau of Investigation (CBI) and the Enforcement Directorate (ED) in the alleged SSC scam.

The chief minister had earlier said she would be going for a reshuffle because of the vacancies caused by the demise of Subrata Mukherjee and Sadhan Pande, and the imprisonment of Chatterjee.

The reshuffle comes just over one year after Mamata secured a thumping mandate for a third consecutive term in Bengal. The state is headed for panchayat elections in 2023.

“Mamata is clearly trying to project a clean image with the reshuffle as the new ministers have no corruption allegations,” said Udayan Bandhopadhyay, political science professor at Bangabasi College, Kolkata. “The Trinamool has been on the backfoot since the alleged SSC scam probe. Hence, it was the right time to change the cabinet.”

Mamata sacked Chatterjee on 28 July after the ED arrested him for his alleged involvement in the irregular appointments of teaching and non-teaching staff in state government-run schools during his tenure as education minister. She had taken additional charge of the portfolios that were with Chatterjee.

“Mamata tried overcoming the scam situation at hand. This is one form of handling the situation by shaking up the cabinet,” said political analyst and author Jayanta Ghosal.

“She is trying to correct the fault lines — something Indira Gandhi used to do under her regime.”

Also Read:Dasmunsi fan who had rapport with Buddhadeb too: Story of Mamata’s tainted aide Partha Chatterjee

Key faces who made the cut

The Trinamool Congress (TMC) chief seems to have rewarded performers and banked on experience while selecting the candidates. Some of the new faces are also known to be close to her nephew and TMC national general secretary Abhishek Banerjee.

“This is also a slow transition to Abhishek-style of working. Those who have proven ability will be promoted. But surely they were made ministers only with Mamata’s consent,” said Ghosal.

Giving details of how “performers were rewarded”, a Trinamool insider told ThePrint: “Partha Bhowmik was once a Mukul Roy loyalist. He was also asked by Roy to join the BJP. But he declined the offer and remained with the Trinamool.

“He led the Trinamool Youth Congress in North 24 Parganas, which was once under Abhishek himself. Bhowmik, like a true soldier, fought against the BJP and defeated the rise of Arjun Singh and the BJP. Today’s ministerial berth is his reward.”

Bhowmik not only retained his seat in 2021 but also ensured that that the BJP’s influence was restricted in the stronghold of Barrackpore MP Arjun Singh, who has now returned to the TMC from the BJP. The three-time MLA from Naihati was given the charge of irrigation and waterways, which was earlier with Soumen Mahapatra.

Babul Supriyo, who joined the Trinamool in September 2021 months after he lost his portfolio in the Modi government reshuffle, has been made the IT and Tourism Minister.