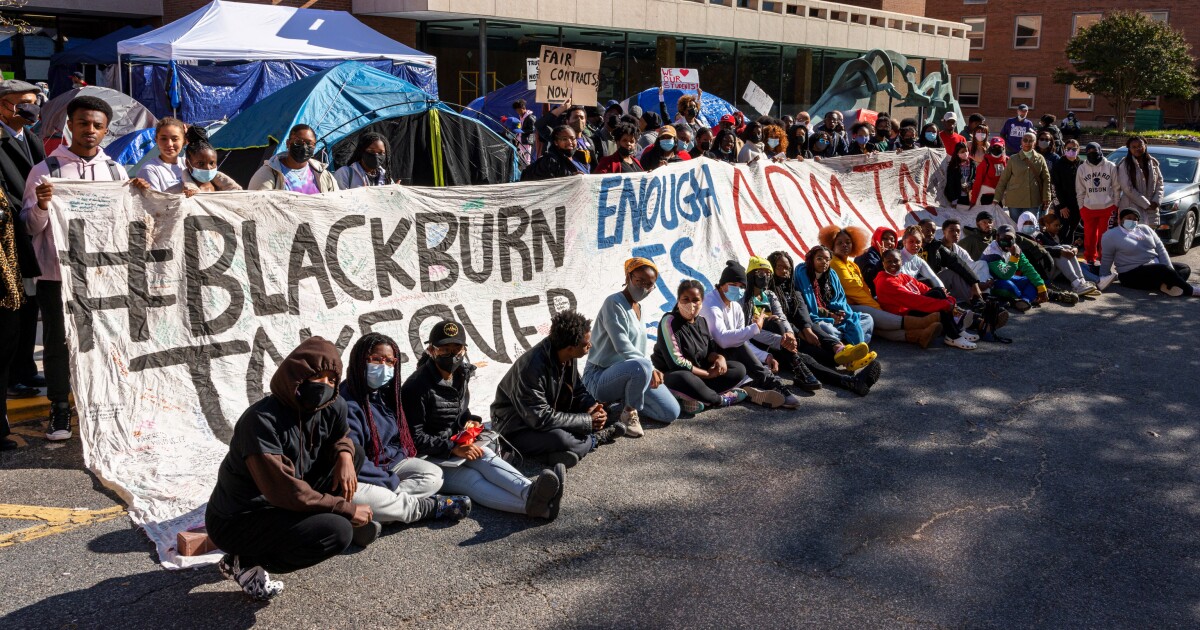 Howard announced the agreement in a tweet just after 10 a.m. on Monday. The details of the agreement remain unclear. In a video message released shortly after 5 p.m. on Monday, the university’s president, Wayne A.I. Frederick, called the end of the occupation a “welcome development and a necessary conclusion to a challenging few weeks for everyone involved.” But he didn’t share specifics on the terms of the resolution.

“This type of protest, to occupy a building and the negative effect of doing so, were felt throughout campus,” Frederick said in the video. “Protest drives change. I accept and applaud it. I do, however, struggle with the type of protest that jeopardizes student safety, the very thing that students said founded their concerns.”

Frederick said that Howard’s 2019 strategic plan and 2020 campus master plan would guide the university’s path forward, and that he would deliver a state-of-the-union-type address, with an “open dialogue” portion, next semester.

“The health and well-being of our students is the most important part of my job as president,” Frederick said. “As I have said before, even one issue in one of our residence halls is too many, and we will continue to remain vigilant in our pledge to maintain safe and best-in-class housing.”

Students involved in the sit-in — the longest in Howard’s history — celebrated the agreement as a victory. The Live Movement, an organization that advocates for students at historically Black colleges, posted on its Instagram account, “After 34 days of protesting and 20 days of negotiations, justice has been served for the Howard University students.”

The university’s Student Association posted, “We would like to commend our fellow students, alumni, and the entire Bison community who united together in support of our campus during this crucial time as we work towards student-centric solutions.”

Tyler Davis, a Howard student and protester at the Blackburn center, disputed Frederick’s claims that the protesters had created an unsafe environment, arguing that the center was already unsafe by hosting a dining hall, Covid-19 testing, and construction all in the same location.

“Even if there was a resolution,” Davis said, “it does not change the fact that there is always going to be this vendetta against us because we essentially created the biggest smear campaign that this school has ever seen.”

Davis declined to discuss the terms of the agreement, citing legal reasons.

“It’s been a very mentally draining thing to be here,” Davis said in an interview with The Chronicle. “I’m glad that it’s over.”

The protests began on October 12 around 8 p.m., when more than 150 students occupied Blackburn, the student center, following a town hall hosted by the student association. Frederick had been invited but could not attend due to a scheduling conflict, Howard officials told The Chronicle. The town hall went on anyway.

Many students slept outside in tents, while the building, formally closed by the university, served as a quasi headquarters for the activists.

Howard administrators made several attempts to encourage students to end the occupation, at one point blaming the protesters for dining-hall closures that led to layoffs. The remarks drew scathing rebukes from student activists and critics online.

On November 5, Frederick addressed the university in a virtual town hall. He acknowledged students’ frustration about living conditions and agreed that the university should improve maintenance and communications on facilities issues.

Davis said on Monday that activists were beginning to clean up Blackburn, removing supplies and preparing to donate them to the surrounding community, in Washington, D.C. They had received material support from groups all over the country.

While they’ve reached an agreement for now, Davis said, their work may not be over yet.

“If the university does not do what it promised to do,” Davis said, “We will take over another building.”