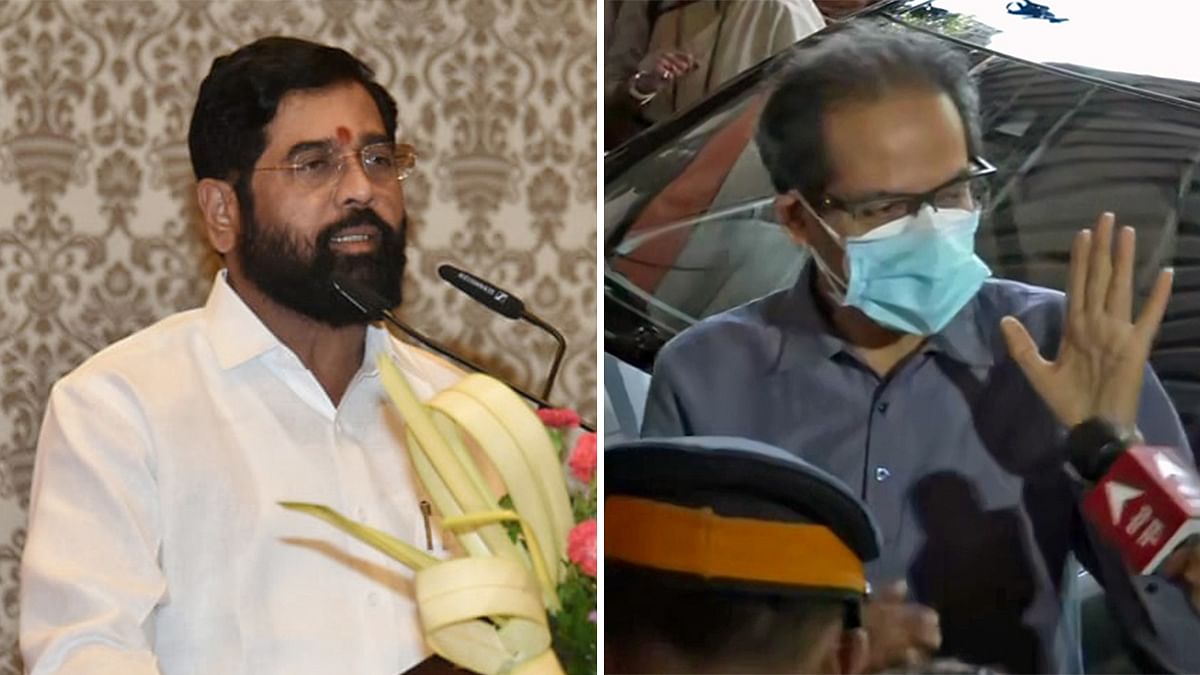 New Delhi: Faced with constant taunts that they had each accepted “pachaas khoka” (Rs 50 crore) to form the new Maharashtra government with the BJP, rebel Shiv Sena MLAs on Thursday went back on their “promise” never to target the Thackerays, the founding family of their party.

On the last day of the Assembly session Thursday, the rebels – who are now in the government with the BJP – continued their unprecedented protests on the stairs of the Vidhan Bhawan, and virulently mocked Sena leader and Uddhav Thackeray’s son Aaditya.

The rebel MLAs, under Chief Minister Eknath Shinde, have become aggressive in the face of constant criticism from the Thackeray camp, analysts said. This camp has constantly targeted them after they toppled the previous Maha Vikas Aghadi (MVA) government of the Shiv Sena, the Nationalist Congress Party and the Congress.

Since the beginning of the Assembly session, the Thackeray faction has raised slogans about rebels receiving “Rs 50-crore bribe” from the BJP to defect, and that they did so because of the fear of the Enforcement Directorate (ED). It has been a common refrain of Opposition parties nationwide that the BJP lets loose its probe agencies on political rivals.

The Shinde camp’s chief whip Bharatseth Gogavale told the media Thursday: “We have tolerated this since the beginning of the Assembly session. Now we too shall protest. If you target us, we will also target you. You stay within your limits, and so shall we.”

Rebel MLAs were seen holding up banners in which they addressed Aaditya Thackeray as “Param Pujya (Pappu) Yuvraj” and alleged that he didn’t step out of the house as Tourism Minister but was now touring the state, trying to drum up support for the Thackeray faction.

The banner showed a caricature of Thackeray sitting on a horse but facing the other direction. The horse faced the direction of “Hindutva” – the Sena’s political ideology – while Thackeray Junior faced “MVA”, in reference to his father’s alliance with secular parties to form the previous government.

The Shinde camp blamed Aaditya Thackeray for breaking their Hindutva, and cried his “disha (direction)” was wrong.

The rebels’ attack on Aaditya Thackeray is a major shift in their political narrative. During the coup phase, their spokesperson and now minister Deepak Kesarkar had said the camp would never criticise Uddhav Thackeray and his family. They had even asked the BJP not to do so.

Reacting sharply to this attack, Aaditya Thackeray said the rebels were frustrated because the BJP didn’t give them enough ministries. “Mocking me will grab eyeballs,” he said.

Thackeray also said he would have been happy if the rebels spoke about real issues like farmers welfare. “We are the ones raising our voice about farmers,” he added. “My sympathies are with them. It shows their upbringing,” he added.

The young Sena leader accused the Shinde camp of having betrayed the MVA. “They are traitors and their real face is in front of everyone. This isn’t Ram Raj, this is Ravan Raj. They are targeting me to get the attention of their superiors. I can see the disappointment on their faces because Shiv Sena is getting a good response (during his travels). They have understood that people are not with them. They need publicity and are doing this for cabinet berths.”