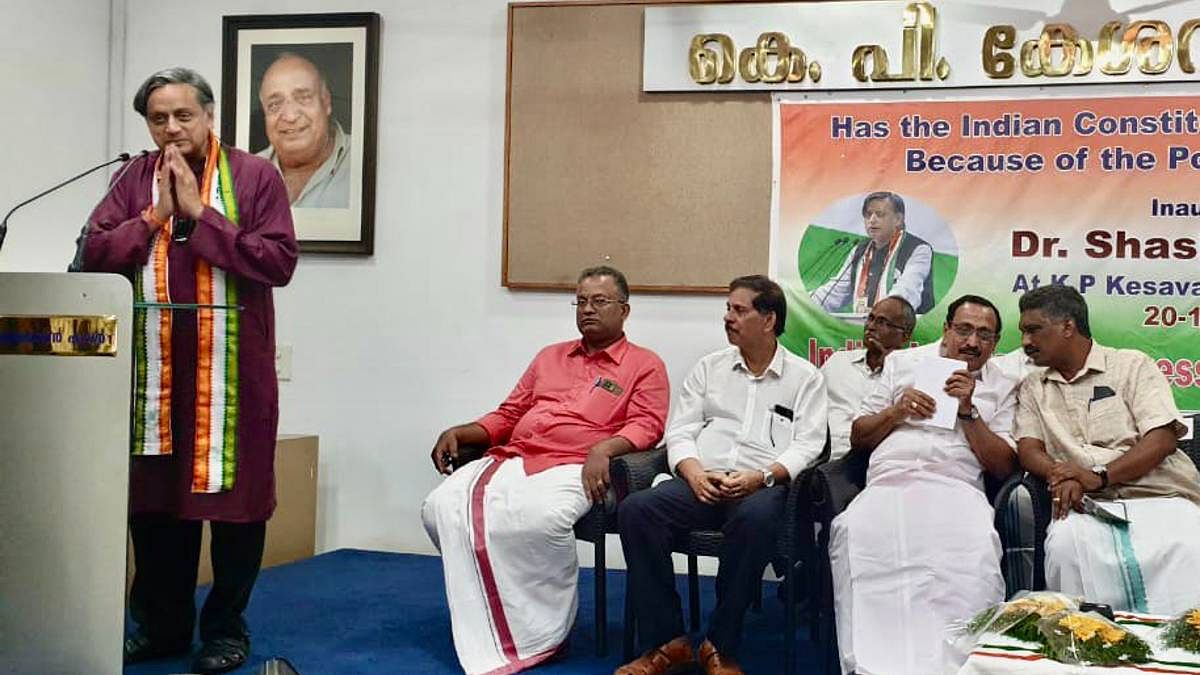 New Delhi: Just over a month ago, he was the challenger for the post of Congress president and now Shashi Tharoor is facing alleged non-cooperation from the party unit in his own home state, with the Kerala Pradesh Congress Committee (KPCC) distancing itself from Tharoor’s tour of north Kerala.

On Sunday, the Youth Congress in Kozhikode kept away from Tharoor’s seminar on the topic ‘Sangh Parivar and Challenges to Secularism’, while the Kannur District Congress Committee, too, is likely to take the same line regarding a talk Tharoor is scheduled to give in the home district of Kerala Chief Minister Pinarayi Vijayan. Both events are part of Tharoor’s four-day Malabar tour that began Sunday.

Tharoor, the MP for Thiruvananthapuram, himself acknowledged the less-than-warm reception he has been getting when he told reporters over the weekend that “I want to take these things with a sportsman spirit. Certain people wanted me to sit on the side bench. But I want to play forward”.

Sunday’s seminar eventually took place under the banner of the Jawahar Youth Foundation, with Tharoor tweeting about the “overflowing audience”.

He also tweeted videos of his reception at the event and wrote: “Wonderful welcome by @iyc activists in Kozhikode after some came under pressure not to provide me a platform.”

Speaking about Tharoor, Tariq Anwar, the All India Congress Committee (AICC) general secretary in charge of Kerala, said: “He’s a Congressman, he is an MP from Kerala. Every Congressman is free to move… that (alleged non-cooperation by KPCC) is his headache if he cannot secure their support. But who is saying they are not cooperating? Has the KPCC issued a statement objecting to it (Tharoor’s events)?”

ThePrint reached out to Tharoor and KPCC president K Sudhakaran for comments. This article will be updated when a response is received.

Top Congress sources in Delhi indicated that this treatment of Tharoor may have come as a result of “tacit” feelers from some Kerala party leaders who are very powerful in the capital.

“This is not good for the party. If there is a leader who has a connection with the people, a man whose popularity is increasing, he should be encouraged. He is a valuable asset for the party. To resort to pettiness of this nature hurts not just the Congress but may even affect ties with allies like the Indian Union Muslim League (IUML), who are also conscious of Tharoor’s popularity. This will also lead to factions in the state — something that the Congress can ill afford,” said a senior party leader.

Also read: Gandhi family has shown its power and Shashi Tharoor his place

Last month, when the Congress presidential election took place, Tharoor had got 11.4 per cent of the total valid votes polled, compared to 84 per cent for the victor, Mallikarjun Kharge.

The Thiruvananthapuram MP had persisted in fighting the election even though it was widely believed that Kharge had the blessings of the Gandhi family.

Now, Tharoor’s north Kerala tour has, according to Congress sources, given rise to speculation about the former Union minister angling for a larger role in Kerala politics.

He is currently in his third term as MP for Thiruvananthapuram but has so far not been very active in state politics. His role has largely been that of a sitting MP and an occasional star campaigner with a popular international profile.

However, with the Congress down at the national level and Kerala being one of the handful of states where the party is perceived as a credible alternative to the incumbent government, Tharoor’s decision to tour the northern part of the state is being seen in Congress corridors as an attempt to change his profile.

Tharoor has also been regularly posting about his engagements on Twitter, often tagging the official state Congress handle or the Youth Congress handle.

Among the meetings he has posted about recently is one of the Lawyers’ Congress, a wing of the party comprising lawyers, and one with National Students’ Union of India general secretary K.M. Abhijith.