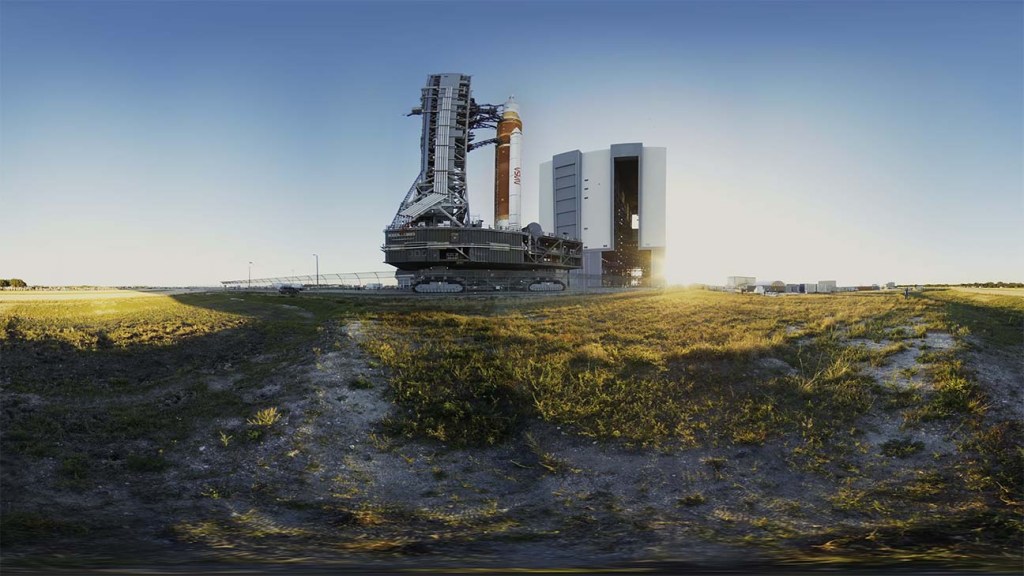 As NASA prepares for Monday’s scheduled launch of its Artemis I rocket from NASA’s Kennedy Space Center in Florida, coverage plans include a unique live stream in virtual reality.

Artemis I is the first, unmanned test flight of NASA’s Artemis moon exploration program, and the integrated Space Launch System rocket and Orion spacecraft is targeted to launch during a two-hour window that opens at 8:33 a.m. ET on Monday.

Felix & Paul Studios — the studio behind Emmy-winning VR program Space Explorers: The ISS Experience — and partners including Meta Quest plan to present a one-hour program that will include live images of the launch, shot in 8K and in 360 degrees with virtual reality cameras. The program will also include prerecorded material and will be hosted by a pair of former NASA astronauts, Karen Nyberg and Doug Hurley.

The program can be viewed in VR on Meta Quest headsets, and for those that don’t have access to the VR headsets, there are also plans for a live stream on Facebook 360 and for this coverage to play in an estimated 200 domes and planetariums.

“We’ve been documenting space exploration through virtual reality for a number of years now, and everything we’ve ever done was cinematic in the sense that we would film and then we would recuperate the footage and then we would process it. This time around, because it’s such a momentous event, you wanna be there in real time,” says Felix Lajeunesse, co-founder and creative director of Felix & Paul Studios. “We decided to migrate from the cinematic VR practice to fully diving into the world of a fully immersive broadcast. For us, it’s a big leap and it’s extremely important — stressful — and cool.”

Plans include four live VR camera positions, including one that he believes is “going to really give audiences a sense of the actual gigantic scale of this spacecraft. And when it launches, the beauty of that is that it’s never gonna get out of frame, because you can just look up and see it go up to space.”

Among the challenges, of course, is camera placement. “We’re far away enough that the equipment is safe, but we’re close enough that it’s going to give you the sense of presence that you could not have otherwise,” Lajeunesse claims, explaining that the virtual reality cameras will be covered with a custom protective housing, as well as “rigged on a structure that is anchored in concrete. That was a multiple-months process of preparation into figuring out how to actually anchor the camera in a safe way.”

This isn’t the first time that the team has had to innovate to provide NASA coverage. The camera used to make Space Explorers remains on the ISS, and according to Lajeunesse, it will be used again for upcoming planned content.

“When you film with a camera on earth, you don’t really have to worry about heat dissipation because heat is going to go up. But if you are operating in an environment of micro gravity, because there is no gravity, heat tends to stay inside of the electronics instead of dissipating,” Lajeunesse says. “We actually had to implement a different thermal management system inside of the camera to make sure that heat could actually dissipate and that the electronics would not overheat.”

For tomorrow’s planned live stream from Kennedy Space Center, the team also equipped a sort of bespoke broadcast truck to produce the program, allowing the production team to monitor the images either by using VR goggles or viewing a flat-screen monitoring system that allows them to pan around the image.

“It’s going to be, I think, extremely thrilling for the audience,” says Lejeunesse.

NASA’s additional plans for the launch include live coverage on NASA TV, as well as the space agency’s app and web site.