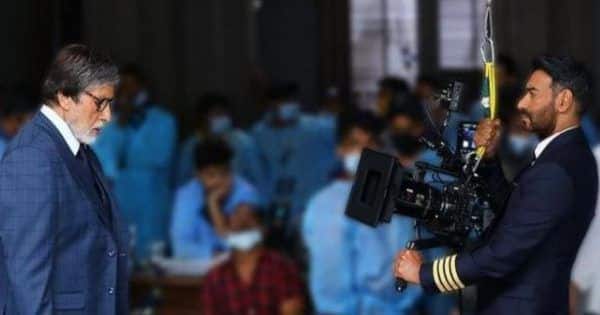 Ajay Devgn, Amitabh Bachchan and Rakul Preet Singh starrer Runway 34 suddenly finds itself the topic of hit conversation. With so many titled heading straight to OTT and with the Omicron variant of COVID-19 shutting down cinema halls in key markets, imposing restrictions in other markets and holding an uncertain future in general for theatrical business in general, there has been a lot of talk about whether Runway 34 will opt directly for a digital release. Well, we have the latest update for you right here about the future of the Ajay Devgn, Amitabh Bachchan and Rakul Preet starrer. Also Read – Sidharth Malhotra starrers Mission Majnu, Thank God, Yodha offered HUGE amounts from OTT even before hitting the BIG screen [EXCLUSIVE]

To get some clarity on Runway 34 and whether it’ll release straight on an OTT platform or not, BollywoodLife got in touch for an exclusive chat with reputed film exhibitor and distributor Akshaye Rathi who opined that they’ve (the trade) has heard nothing to this effect so far, but it would be very disappointing were it to happen because of the fact that after a huge blockbuster like Tanhaji (in theatres), a superstar like Ajay Devgn shouldn’t have two back-to-back OTT releases (there was already Bhuj: The Pride of India). Also Read – Ajay Devgn at Sabarimala Temple: Sleeping on chattai to giving up alcohol, rituals the actor followed for 11 days

Akshaye Rathi added that the OTT release is also not likely to happen because Ajay himself is an exhibitor and understands the need of the hour. Plus, it’ll send out a very wrong signal as Tiger Shroff starrer Heropanti 2 is also slated for release on the same day as Runway 34 and it would send out a very wrong signal if the latter, which is headlined by two huge stars like Ajay Devgn and Amitabh Bachchan, would be seen bowing out of the race. So, Akshaye has his fingers crossed that both big movies, featuring big stars, arrive in theatres to light up the extended Eid weekend this year. Also Read – From Samantha Ruth Prabhu to Neha Sharma, these 6 beauties know how to slay the sports bra look like a queen – see pics