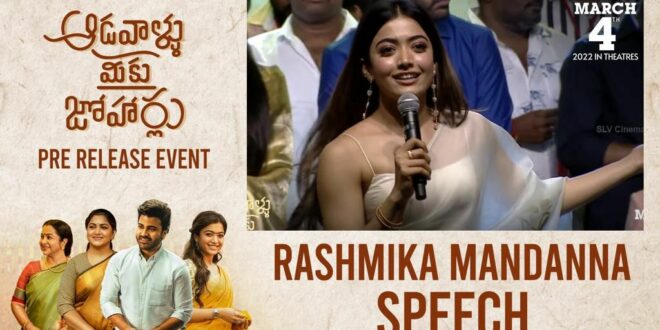 Aadallu Meeku Johaarlu is one of the upcoming Telugu films. Sharwanand is attempting a family drama after a long time. Directed by Kishore Tirumala, the film is produced by Sudhakar. Rashmika Mandanna played the film’s female lead.

“How much ever I irritate Sharwanand, he never gets irritated. He is one of the sweetest boys I have ever met genuinely. I am always playful on the sets but he tolerates me,” said Sharwanand, funnily assuring him that she will irritate him more in their next film.

The actress then thanked the entire cast and crew for being a part of the project. She also thanked Sai Pallavi for gracing the occasion. “Thank you, Pallavi for coming here and brightening up the event. I am proud of the work you are doing,” said Rashmika, thanking Keerthy Suresh as well.

The film is hitting the screens on 4th March.