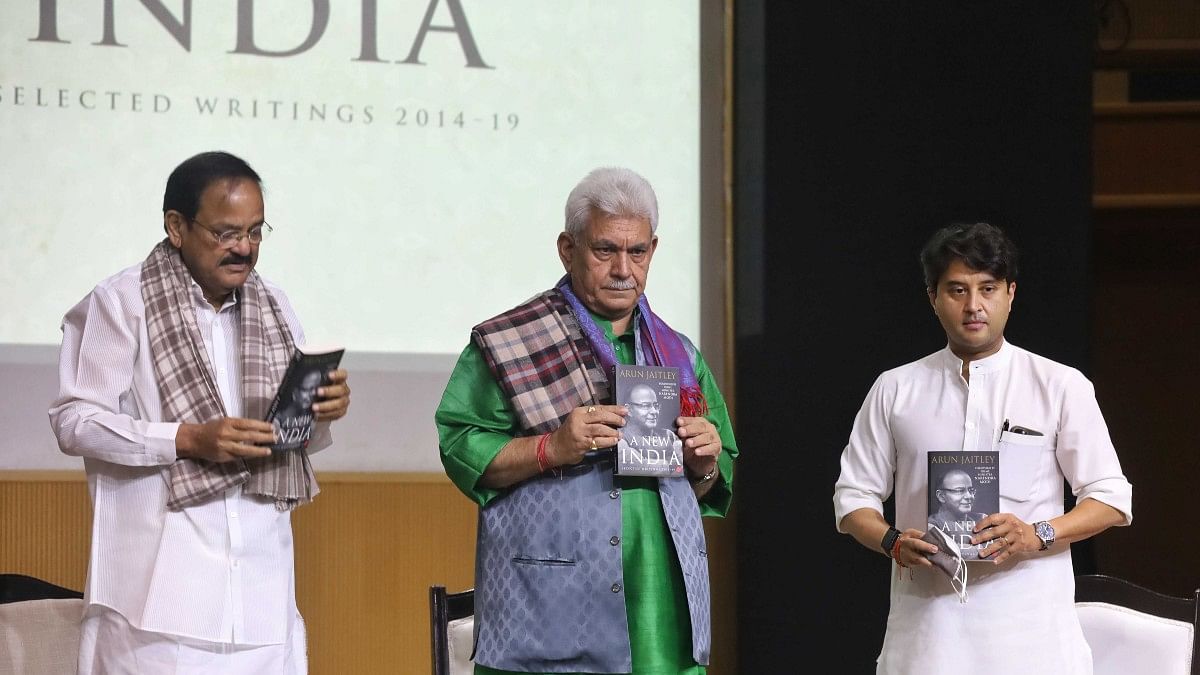 New Delhi: Former vice-president Venkaiah Naidu, while speaking at the book launch function of ‘A New India – Selected writings from 2014 to 2019’ written by late Arun Jaitley, said that the former Union Minister had set an example through his conduct for the fellow parliamentarians and that it ‘saddens and depresses him’ to see the way some Members of Parliament (MPs) behave today.

Naidu said that apart from his [Jaitley] family and the people of India, the parliamentarians and the party really missed him. “I used to deal with him on a day-to-day basis as the chairman of Rajya Sabha. He was also one of the attractions of the Central hall of Parliament. If there was a crowd, understand that Jaitley would be present there. Even his political critics could not find faults with him. His conduct, decorum, and passion is an inspiration and I feel sad and depressed with the way things sometimes function at the parliament [now]. I am not saying everyone should praise the government, but there should be constructive debate and dialogue. Jaitley, my friend, was at the forefront of bringing reforms”, the former VP said.

J&K Lt Governor Manoj Sinha reminisced about his student days with Jaitley at Hindu College and said the latter would have been elated to see the change in Jammu and Kashmir today.

“His presence was the beginning of a new era of reason and political expression in India. He has left a legacy, which begins a new thought chain in the fields of finance, politics, and academia”, he added.

Sinha, mentioning Jaitley’s last blog, which was on the abrogation of Article 370, said he was vocal about how Article 35A discriminated between Indians. “This year, on Independence Day, there were more tricolours in J&K than the hands that could hold them, and it would have made him very happy,” Sinha said.

During the panel discussion, industrialist Sunil Mittal recalled how Jaitley had complimented him on his ‘controversial’ article, where he praised the former Prime Minister Manmohan Singh. “I still believe that he (Manmohan Singh) will be remembered much later as someone who perhaps had the right instincts and intentions, but couldn’t implement things he wanted to. Today we have a very strong leader and that makes all the difference”, Mittal said.

Former CAG Rajeev Mehrishi said that what destroyed the growth in history was the ‘fashionable form of Socialism’. “Big changes came about in the decade of 90s and after that, from 2014. Now people are willing to look at reforms as a welcome change”, he said.

Mehrishi, who worked with Jaitley as the Finance Secretary, praised his grasp on financial policies.

“Socialism never benefited the poor, but the class of English speakers. We have a realization that economic growth is the best anti-poverty policy. Perhaps, the best foreign and population policy as well. In the short period, I was associated with Jaitley, I witnessed his clarity of mind and his willingness to make reforms. Nobody could have implemented GST the way he did. He had the vision, the approach, and the associations”, he said.

‘Unflinching commitment to the party’

Swapan Das Gupta, former MP, said Jaitley could win a battle without the other side thinking that they lost. “It was his great achievement. It also marked his style of politics. His commitment to his party was steadfast, unflinching, and uncompromising even till his last days”, he said.

On the question of lack of credible opposition, Dasgupta said the opposition today lacks belief. If they are trying to sell something that they don’t have, that becomes an issue, he added. “There are people in the Congress who believe that they are the only cementing force in the party and without them, the party will disintegrate. There is a tide in the affairs of every dynasty…at this moment the tide is not very encouraging for them”, he elaborated.

On Jaitley’s vision for India at 75, Mittal said he wanted to see India as a powerful and developed nation. Mittal also noted that Jaitley could see the problems coming from very early on. The panelists praised his vision for self-reliance through defence equipment manufacturing. “We all know India desperately needed those fighter jets (Rafale). He brought it with a commitment that they will be manufactured in the country. He did envision India becoming independent in manufacturing defence equipment. This government had the conviction to stand up to the criticism”, Mittal said.