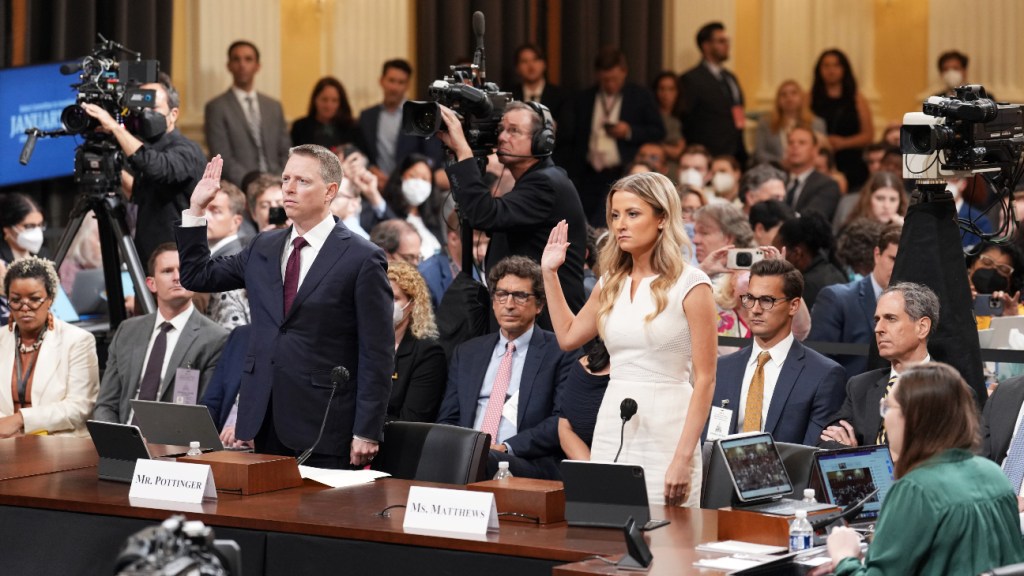 When the House Jan. 6 committee announced that their next hearing would provide a minute-by-minute account of what Donald Trump was doing during his 187 minutes of inaction as the insurrection unfolded, it sounded like the premise of a bad action movie. What they provided was certainly a thriller, but of an absolutely infuriating kind. The hearing presented such a devastating indictment of the former president’s dereliction of duty to the Constitution and the nation that only those completely drunk on the MAGA Kool-Aid could ignore its findings.

This 9th edition of the weeks-long series and final primetime hearing of the summer needed to deliver the goods, and it did so in spades. Like its predecessors, it didn’t just offer new information to devastating effect; it also made us reassess what we already knew. It’s no secret that Trump spent those 187 minutes fiddling while the Capitol burned. But as the evening made painfully clear, it’s not only that he did nothing to quell the violence. By his silence and his incendiary tweets, he further incited it.

“President Trump did not fail to act, he chose not to act,” said Rep. Adam Kinzinger, who co-chaired the evening with fellow congressperson Elaine Luria. That both of them served in the military, as did former Deputy National Security Adviser Matthew Pottinger, one of the two live witnesses testifying, only accentuated the sense of patriotism fueling the investigation of how close our democracy came to faltering.

It turns out that Trump spent the majority of the time in question in his private dining room, watching television (only Fox News, of course). He also made lots of phone calls, although we don’t know exactly to whom because the White House Daily Diary and Call Log went strangely blank during those hours. Trump is apparently the only president in history to rely on burner phones. He made no attempt to enlist any military or law enforcement response to turn back the murderous rioters. But he did apparently contact senators to urge them to delay the counting of the votes, and Rudy Giuliani to do whatever the hell Rudy Giuliani does.

The committee heard testimony from Pottinger and former White House deputy press secretary Sarah Matthews, both of whom preserved their dignity and reputation by choosing to resign in the immediate aftermath of Jan. 6. And both made for impressive witnesses, with the square-jawed Pottinger exuding respect for the rule of law and Matthews, a lifelong Republican, expressing her moral outrage at Trump’s refusal to call off his violent minions.

As they’ve done repeatedly, the committee cannily used the words of Trump’s Republican enablers against them. Numerous video and audio clips provided vivid reminders of the initial condemnation of Trump’s actions by the likes of Mitch McConnell and Kevin McCarthy, who have since expressed their support of the former president should he run again. The most delicious moment was a photo of Josh Hawley doing his infamous fist pump supporting the protesters from behind a protective barricade, followed by footage of him frantically fleeing when they actually invaded the Capitol. Just to drive the point home, the footage was repeated in slow-motion, and will hopefully be available soon as a screensaver.

Hawley wasn’t the only one in fear of his life, it turns out. Even the Secret Service agents protecting Pence were beginning to panic, as harrowing excerpts from their radio traffic made vividly clear. As the rioters got closer and closer to the Vice President, some of them began phoning and yelling out goodbye messages to family members even as Trump was tweeting out attacks on Pence. “He put a target on his own vice president’s back,” Luria pointed out, while Matthews disgustedly commented that Trump was “pouring gasoline on the fire.”

As Trump sat in his dining room, everyone in his orbit was imploring him to do something, anything, to tell his demented followers to stand down. This included his aides, advisors, congressional Republicans, his children, and, demonstrating rare moments of lucidity, Fox News personalities. Don Jr. texted Mark Meadows that his father’s legacy would be destroyed if Meadows didn’t convince him to do something. “This is one you go to the mattresses on,” he urged, in probably the worst Godfather reference ever.

In pre-taped testimony, Pat Cipollone said that he, too, attempted to persuade Trump to do something, to no avail. During his questioning, the former White House Counsel periodically looked forlornly at this own lawyer, who reminded him not to answer certain questions because of executive privilege. But hey, at least Cipollone didn’t take the Fifth.

It’s not fair to say that Trump did nothing during all that time. He did tweet. Probably realizing his followers have short attention spans, he helpfully sent out a link to a video of the incendiary speech he had just delivered at the Ellipse Rally.

Eventually, Trump did get around to delivering his infamous Rose Garden speech, in which he ignored the carefully scripted remarks that had been prepared for him and instead blew a wet kiss to the rioters. After imploring them to go home, he added, “We love you, you’re very special.” His final tweet of the day reminded them to “remember this day forever,” as if they had just attended their senior prom instead of attempting to overthrow democracy.

There was also raw footage of Trump attempting to record his Jan. 7 video condemning the rioters’ actions. Not since Albert Brooks in Broadcast News has someone struggled so unsuccessfully to get through a taping. “I don’t want to say ‘the election is over,’” he told his aides as he fumbled his way through the brief remarks, finally whining, “My only goal was to ensure the integrity of the vote.”

Toward the end of the evening, Pottinger further decried Trump’s actions, comparing him unfavorably to such non-sore losers as Al Gore and, in the 1960 election, Richard Nixon. (You know how far we’ve sunk when Richard Nixon gets cited as a moral paradigm.) He made a forceful argument that the events of Jan. 6 “emboldened our enemies” and that our national security had been weakened as a result. There was also audio footage of Steve Bannon, recorded several days before Jan. 6, laying out Trump’s strategy to overthrow the election in detailed fashion like an over-explanatory Bond villain.

As usual, Liz Cheney was a force of nature during the proceedings, and I say that as someone who can’t wait to thoroughly disagree with Liz Cheney again. Her damning closing summation, in which she decried Trump for abusing his followers’ trust by “preying on their patriotism,” would have made Perry Mason give up the ghost. Trump claims not to be watching the hearings, but we all know he is. And there’s no doubt that her closing words, “We will see you all in September,” made him shudder.