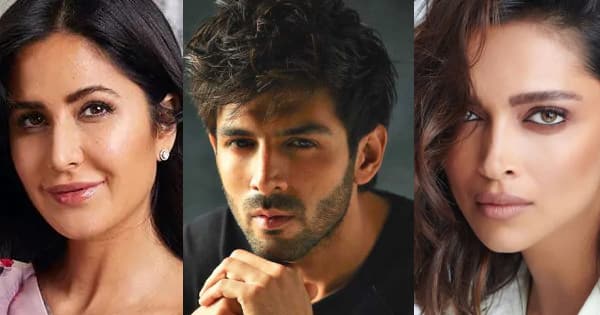 Kartik Aaryan has now bceome a bankable star. With the great success of his recently released film Bhool Bhulaiyaa 2, Kartik is an actor who is in demand. Recently, he announced that he would be working with Bajrangi Bhaijaan director Kabir Khan next. The film will be produced by Sajid Nadiadwala. While Kartik has been confirmed as the male lead, who is going to be his leading lady? Buzz is that makers are planning to get either Deepika Padukone or Katrina Kaif on board this film. Also Read – Ananya Panday looks extremely uncomfortable in her dress at Liger trailer launch; netizens call her, ‘Urfi Javed ki choti behen’

Who will be Kartik Aaryan‘s leading lady?
As per a report in Etimes, it looks like the makers are considering two of the biggest female actresses to rope in for Kartik Aaryan’s movie. In the past, Deepika Padukone has shown interest in working with Kartik Aaryan. While wishing him on his 30th birthday, she had made a post on Instagram wishing to sign a fun film with him. Over this, he had responded, “Aap bas dates taiyyar rakho, fun and film mai laa rha haun (keep your dates ready, I am coming with fun and films).” In response, she had said that all her dates are his. If the reports are anything to go by, Kartik and Katrina were to team up for a Red Chillies film but that did not happen. Kabir Khan and Katrina Kaif share a very good bond and it remains to be seen if she will be roped in for this one or not. Also Read – Priyanka Chopra, Deepika Padukone, Ananya Panday and more Bollywood actresses who left us panting by slaying the naked-dress look [View Pics]

Kartik Aaryan’s line up of films
The Luka Chuppi actor is a very busy star. He has many films in his kitty. Currently, he is gearing up for the release of his film titled Shehzada. He also has Captain India directed by Hansal Mehta. He also has Satyanarayan Ki Katha which has reportedly been renamed to avoid hurting any religious sentiments. Kartik Aaryan also has a film named Freddy in the pipeline apart from Kabir Khan’s next. Also Read – Ranveer Singh strips off completely and poses nude for Paper magazine; fans say, ‘Deepika apna Ranveer sambhal’ [Read reactions]