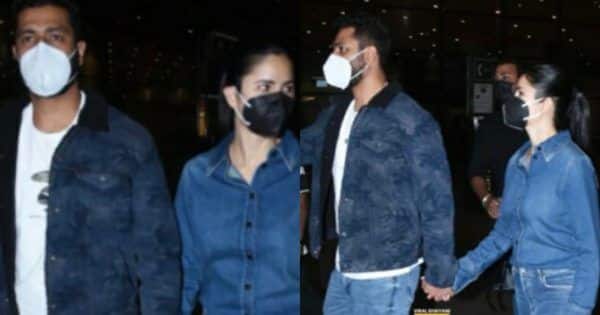 Katrina Kaif and Vicky Kaushal are back in town. The couple were clicked at the airport as they got back from London. Katrina Kaif wore a denim shirt over a pair of jeans. The colour was the same. Vicky Kaushal had a jacket, tee and denims. He also donned a denim jacket. The actor was seen firmly holding Katrina Kaif’s hand as they walked out of the airport. There were reports of how Katrina Kaif’s mom wanted Vicky Kaushal and his folks to come to London and meet Katrina Kaif’s extended family. The actor finished work on Luka Chuppi 2 in Indore with Sara Ali Khan recently. Also Read – Sunil Grover fans slam Hina Khan’s latest tweet, Siddhant Chaturvedi comments on rumoured gf Navya Naveli Nanda’s pics and more Trending Entertainment News Today

Fans fo Vicky Kaushal and Katrina Kaif are showering immense love on them. A fan commented that Katrina Kaif was right that Vicky Kaushal and she look really good together. Another one said that they deserve all the happiness. People also commented on how Vicky Kaushal is proving that he is a good husband. There were rumours on whether he did be in the city to be with Katrina Kaif for Valentine’s Day. The actress left for London some days back. Also Read – Salman Khan, Sushmita Sen, Lata Mangeshkar and more: Here’s why these 7 celebs NEVER got married!

As per news, Katrina Kaif is supposed to be shooting for Tiger 3 on Valentine’s Day. The shoot is happening in Delhi. Salman Khan and she will be doing some hard-core action scenes in a realistic setting. Fans were thinking if Vicky Kaushal would drop work to be with her on this occasion. Earlier, she had flown down to Indore to spend her first Lohri with Vicky Kaushal. The couple married in December 2021 in Sawai Madhopur’s Six Senses Fort Barwara. Katrina Kaif has a couple of big movies in her hand. Her last release Sooryavanshi was a blockbuster. Also Read – Dhanush and Aishwaryaa Rajnikanth’s divorce was not SURPRISING and expected; here’s why!