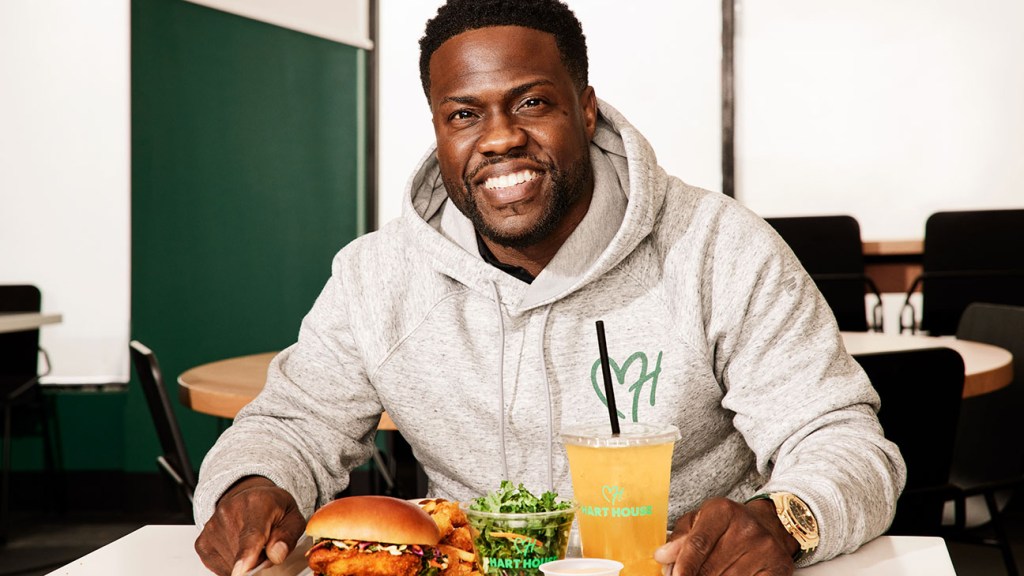 Conveniently situated in a Westchester Village plaza inside what was previously a Boston Market, Hart House has landed prime real estate considering LAX — and an outpost of tourist-friendly In-N-Out Burger — are nearby.

Hart partnered with former &pizza president Andy Hooper, now Hart House brand’s CEO, who mentioned how impressed he is with Hart’s vision for impact in the fast food industry.

“I grew up in the restaurant business predominantly in human resources, trying to figure out how to change the industry for the better by creating better jobs and more sustainability in the employment experience,” Hooper said. “We found a lot of common ground in the idea that this should be something that structurally makes restaurant jobs and restaurant food better.”

Investing in a new future for fast food also involves ground-level employees like cooks and cashiers, Hooper says, indicating Hart House’s commitment to paying employees a living wage alongside other benefits like savings, retirement and lifestyle spending accounts for things that are wellness-related.

“Giving all of that to them up front creates this social contract where you can really have them step up and perform at a much higher level,” Hooper explained. “If you’re going to demand that of the team and be able to create that kind of future that’s worth craving, you’ve got to invest in your people first as a foundation.”

“This menu was cultivated in a way that allows us to really kind of take a stairstep from where those typical fast food restaurants have been,” Salem said. “No artificial colors, preservatives or flavors really requires a layer of investment. Not all companies are willing to make an investment that way, but we are.”

Beverage choices are plentiful: There are four plant-based shake options, organic sodas from Tractor, iced tea, limeade and one seasonal drink. Cookies from Culver City-based Dr. Shica’s Bakery are available for dessert as well. And there are even secret menu items like “frots” — a combination of french fries and tater tots.

According to Salem, one of the traps that a lot of fast food restaurants fall into is “menu creep” or menu expansion, which Hart House plans on avoiding.

“A lot of times they’ll expand their menu just for the sake of expansion so that they can claim they have a wide variety of products that appeal to the masses,” Salem said. “If you do your homework in the beginning, you can create a limited menu that does appeal in a ubiquitous way, but that also allows you the simplicity to be able to deliver it at scale. I do see us [introducing] some LTOs [limited time offers], but not to the point where we slow down operations or make a sacrifice on food quality.”

Hart has not only talked openly about his vegan lifestyle but was also an early investor in Beyond Meat.

“After liking the [Beyond Meat] burger [over other plant-based options], I said, ‘Let me see if I can be more consistent,’” Hart explained during a May 2020 episode of The Joe Rogan Experience podcast. “Since doing that, I’ve seen a significant change. Just being more vibrant, more up and at it. My days were always long, so there used to be a wall that I would hit when I was eating the meat, whether it was the burger patty without the bun, whether it was the steak and egg for protein … Whatever it was, I always hit a wall a day. [Now] I don’t have those crashes.”

So far, Hooper says there have been six leases signed to put Hart House in more locations, with plans to open 10 to 12 in California alone by the end of next year. The next location — set to open soon — will be located off of Sunset Boulevard and Highland Avenue and will feature a drive-through. Hart says he hopes to eventually see locations in San Francisco, Las Vegas, Atlanta, Florida and even his hometown of Philadelphia.

“The goal is to expand and not have a one-and-done,” said Hart. “We’re playing real ball.”