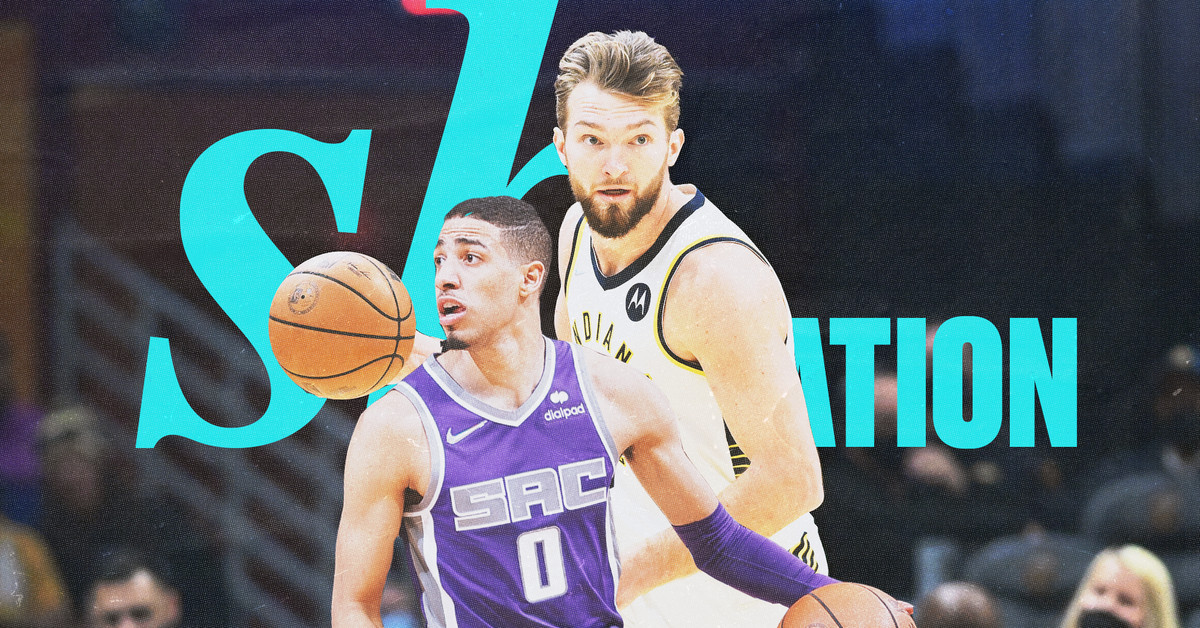 The Indiana Pacers and Sacramento Kings were two teams in desperate need of a shake-up. About 48 hours before the 2022 NBA trade deadline, the franchises agreed to a bold deal headlined by a swap of foundational pieces.

The Pacers have traded Domantas Sabonis, Jeremy Lamb, Justin Holiday, and a 2027 second draft pick to Sacramento for Tyrese Haliburton, Buddy Hield, and Tristan Thompson, according to Adrian Wojnarowski of ESPN.

This is a massive trade that immediately changes both the short-term and long-term outlooks for each franchise. It’s an admission from both sides that their ‘star’ pairings weren’t working. The Kings are breaking up the De’Aaron Fox-Haliburton backcourt, while the Pacers are breaking up the Myles Turner-Sabonis front court.

The Kings were rumored to be interested in Ben Simmons, but ultimately traded their best assets for Sabonis. The Pacers meanwhile finally chose a direction after so much speculation about the status of the Turner-Sabonis pairing. Haliburton should be a piece they can build around for a long time.

Let’s grade this trade from both sides.

The Kings had a ton of big men on their roster, but none of them had the talent or credentials of Sabonis. The 6’11, 240-pound Sabonis will turn 26 years old at the end of this season, and already has two All-Star nods to his name. He’s one of the game’s better interior scorers and rebounders, and one of the best passing bigs in the league.

Sabonis can be the hub of an offense at his best. He’s averaging 19 points per game this season while posting a 22.8 percent assist rate that ranks in the 96th percentile of all bigs, per Cleaning the Glass. Sabonis will take some threes — he’s hitting 32.4 percent of his triples on 2.3 attempts per game this season — but he does the majority of his work from the high or low post.

The big question throughout Sabonis’ career has been his ability to anchor a defense as a rim protector. He’s never been a good shot blocker, posting a 0.7 percent block rate this season that ranks in the sixth percentile of all bigs, per Cleaning the Glass. Of course, Indiana typically had an elite shot blocker in Turner near the basket, which had Sabonis playing more away from the rim.

Sacramento also has another solid offensive big man who struggles to protect the rim currently on the roster in Richaun Holmes. It will be fascinating to see if the Kings deal Holmes or try to play both bigs together.

The Kings are now going all-in on the Sabonis-Fox pairing. What they do with the rest of the roster will be the big question.

Sabonis is a young and productive big man on a below market contract that will pay him $20 million next season and $21 million in 2023-24. It’s difficult to find an All-Star caliber player on a more team-friendly deal, rookie contracts aside. There’s no doubt he’s a major talent upgrade in the front court for Sacramento. This deal still unfortunately reeks of the Kings making another shortsighted move yet again.

On the brink of his 22nd birthday, Haliburton is more of the more promising young guards in the league. He has the sort of length, shooting, and impressive defensive instincts teams covet, and he’s still on a rookie deal for two more seasons after this one. It felt like it only would have been worth it for the Kings to deal Haliburton for a superstar, and while Sabonis is very good, he’s not quite at that level.

For all the concern about Fox’s pairing with Haliburton, there will remain questions about how Fox fits with Sabonis. Neither Fox or Sabonis are good outside shooters. Both like to play with the ball in their hands. Each has a reputation as a defensive liability at this point in their careers. While adding Sabonis is likely a talent upgrade in the aggregate, this feels like the sort of impulsive move that has defined the Kings through almost two decades of mismanagement.

This deal is all about Haliburton for the Pacers. The No. 12 overall pick in the 2020 NBA Draft, Haliburton has emerged as one of the more promising players from his class. While he lacks takeover scoring ability, Haliburton brings a lot of skills to the table that should fit in a variety of different lineups.

The thin 6’5 guard is averaging 14.3 points, 7.4 assists, nearly four rebounds, and 1.7 steals per game this year. He’s hitting 49 percent of his two-pointers, 41.3 percent of his three-pointers, and 83 percent of his free throws. Haliburton has just seemed to get better and better every year since his breakout freshman season at Iowa State, and he should continue to improve as he goes on in his career.

Haliburton’s biggest shortcoming is that he doesn’t put much pressure on the rim offensively. He only takes 15 percent of his shots at the basket this year, which ranks in the 15th percentile among combo guards, per Cleaning the Glass. He’s not going to draw a ton of free throws, either. When Haliburton does get to the rim, he’s a very good finisher — making 64 percent of his attempts from in close, which ranks in the 75th percentile at his position — but his game is more about everything else he brings to the table.

Haliburton is an ideal ‘connector’ piece who can space the floor as a shooter, beat a set defense with quick passes, and help force turnovers defensively by playing the passing lanes. He’s a high-IQ player who does plenty of little things to help teams win even if his lack of juice off the dribble seems to limit just how high his ceiling is.

Haliburton joins a backcourt that already includes promising rookie shooting guard Chris Duarte. Veteran point guard Malcolm Brogdon is still around, too. The Pacers needed a move to balance out their roster, and this feels like a big success for them despite trading their best player. A Midwest native from Wisconsin, Haliburton should quickly emerge as a quality long-term building block and fan favorite in Indiana.

The 29-year-old Hield is also one of the best shooters in the league. He’s under contract for the next two seasons making $20.5 million next year and $18.5 million in 2023-24. While he’s unlikely a long-term fit in Indiana, it’s possible the Pacers can trade him for additional future assets.

The Pacers were always destined to break up the Sabonis-Turner pairing. Getting a talent like Haliburton in return for splitting up that pairing seems like a big win for Indiana.

The Pacers suddenly look like they have a bright future ahead of them. Haliburton and Durate is a super young, super intriguing backcourt with size and shooting. Turner is still a quality center who can block shots and stretch the floor. Brogdon is a good all-around veteran guard, and T.J. Warren can be a contributor too if he ever gets healthy. Plus, the Pacers are currently in position to have the No. 5 overall pick entering the lottery. If the Pacers can jump into the top four and select one of Paolo Banchero, Chet Holmgren, Jabari Smith Jr., or Jaden Ivey, they will suddenly have one of the better young cores in the league.

While most assumed Turner would be the one traded, Sabonis’ unique skill set made him arguably more challenging to build around. The Pacers probably still don’t have a future superstar on the roster, but Haliburton is a ‘star in his role’ type who makes everyone around him better. Given his developmental trajectory over the last few years, it would also be foolish to cap his ceiling.

The Pacers just got a lot more exciting with this trade even if losing a proven contributor like Sabonis hurts in the present.