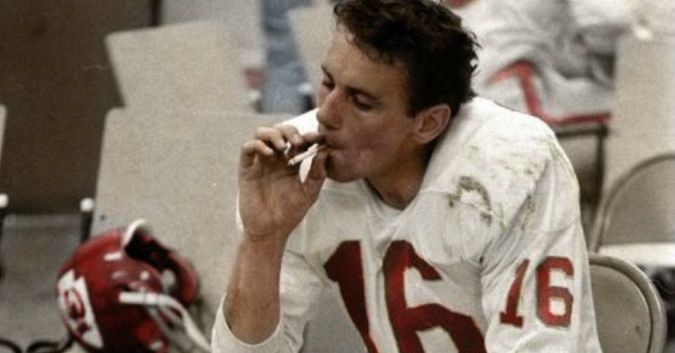 Legendary Chiefs quarterback Len Dawson died Wednesday at the age of 87. The football world is paying tribute to his amazing career, his brilliance as a quarterback, and him as the subject of one of the greatest photos in NFL history.

Few sports photos so perfectly encapsulate a moment as this. It was taken by legendary photographer Bill Ray for LIFE magazine during halftime of Super Bowl I. Perhaps the most astonishing part of the photo is that it never made it to print. Magazine editors didn’t see anything special about Dawson smoking in the locker room with a beer at his feet at halftime, likely due to the social mores of the time. There was nothing inherently remarkable in 1967 about a man having a cigarette and a beer in what’s ostensibly the middle of their workday — after all, this was roughly the same time period as Mad Men, and we know how hammered everyone got at work lunches in that show.

It wasn’t until later that the photo resurfaced. Looking through a modern lens, the photo is simply remarkable. It’s not just the act of smoking and drinking, but the context of it all. Super Bowl I was incredible close in the first half, a true duel between Dawson and Bart Starr. The two quarterbacks went back-and-forth with touchdowns, with the difference being a 14-yard run by Packers running back Jim Taylor, which the Chiefs could only answer with a field goal.

Entering halftime the score was 14-10 in favor of Green Bay, but there was no reason for Dawson to be nervous — even though he was competing in the first, biggest football game of all time. The scoreboard didn’t show it, but the Chiefs were the better team in the first half. Dawson led long, gashing drives deep into Packers’ territory, and he was surgical. Dawson went 11-for-15 for 152 yards and a touchdown in the first half, which were absolutely ludicrous statistics for the era. The Chiefs were let down only by receivers who failed to pick up a few additional yards on two critical third downs, which forced Kansas City to settle for field goals, one of which was missed.

Returning to the locker room in what he felt was a good position, playing some of the best football of his life — Dawson lit up a cigarette, chilled on a chair and had himself a cold one. That’s the true magic of this photo. It lacks any sense of nervousness or anxiety, and there was no reason for Dawson to feel rattled.

We know how this story ended. Vince Lombardi, being the legend that he was, completely adjusted at halftime. The Packers rushed Dawson on almost every down in the second half, while doubling receiver Otis Taylor (Dawson’s favorite target) and removing him from the game. Green Bay scored 21 unanswered points in the second half, winning the first Super Bowl 35-10.

For all the iconic images from that game it’s this photo of Len Dawson in the locker room that’s up there with Vince Lombardi being hoisted in the air for the most memorable. A legendary quarterback, sitting in complete confidence, taking a drag off a smoke in a way that’s simply cool as hell.

RIP to Len Dawson, one of the greatest quarterbacks of all-time, and an absolute legend.

Note: It’s been pointed out that Dawson is drinking a Fresca here, and not a beer. Y’all are absolutely correct and I am an idiot. However, can you really blame me for thinking Dawson would drink a beer? He’s still cool as hell.