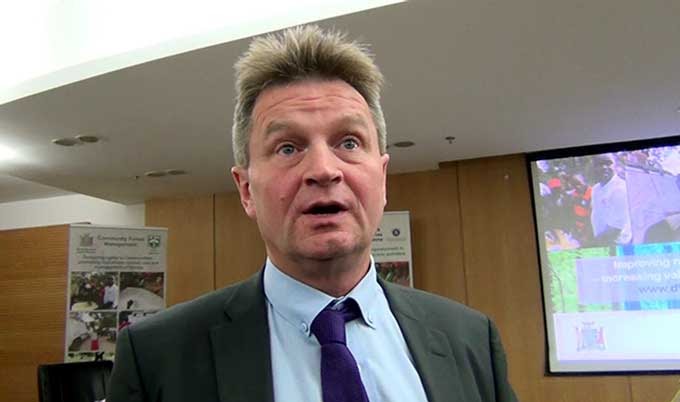 Scores of CCC supporters were injured in Wedza, Murewa and
Gokwe last week in violent attacks by Zanu PF youth to block Chamisa from
addressing his supporters

Police have on several occasions blocked the CCC from
holding rallies, while allowing Mnangagwa and other Zanu PF members to hold the
same.

In an exclusive interview with The Standard on Thursday,
outgoing EU ambassador to Zimbabwe Timo Olkkonen  urged the Zanu PF leader to abide by the
constitution and allow the opposition to campaign freely.

“Elections are very important for any democracy. We need to
give people the right to vote, to express their political preferences and
mandate for them to be governed. That is why 2023 will be an important year for
Zimbabwe,” Olkkonen said.

“The good thing about the 2018 election was the campaigning
period prior to the election day itself.

“Of course, we have had unfortunate events of the first of
August and after, but prior to that, one would witness that the campaigning
period was free from violence, free for campaigning without harassment.

“That will be good if the campaigning freedom could be
replicated in next year’s election.”

The aim was to punish the perpetrators and find lasting
solutions to avoid the same to happen.

But four years later, there have been no arrests or
prosecutions.

“I wouldn’t say that we need to copy everything that was
done in 2018 but at least the fact that all political parties campaign freely
and that is something that I hope to see in the upcoming election,” Olkkonen
said.

In May, the European Union Observer Mission (EUOM) said
Zimbabwe had failed to implement its recommendations and other electoral reforms
to guarantee free and fair elections in 2023.

The EU mission made 23 recommendations after the disputed
2018 elections, including the alignment of the Electoral Act to the
Constitution and that the independence of the Zimbabwe Electoral Commission
(Zec) must be observed.

“The recommendations are based on international best
practices. They are not European recommendations but they are from experts who
have a lot of experience on how elections work around the world.

“So I think there is still time for electoral reforms but the
window opportunity is obviously closing,” Olkkonen said.

“Police say they have reports of violence from across the
political divide.  Notwithstanding the
heat of by-elections, such violence is uncalled for as we seek unity and
harmony in a democratic dispensation,” Mutsvangwa said.

“That said, the President called on party supporters not to
fall into provocations by an opposition which organizes rallies that are bent
on trolling Zanu PF.”

Analysts and independent election watchdogs have warned of
a violent run-up to the 2023 elections.

On Friday, Chamisa ruled out boycotting elections over
political violence and failure to implement electoral reforms.

Chamisa narrowly lost to Mnangagwa in the disputed 2018
elections.

The Constitutional Court however upheld Mnangagwa’s
victory, but Chamisa insists he was cheated out of victory.

Mnangagwa has been endorsed as Zanu PF’s presidential
candidate, and is likely to square off with Chamisa again as his main
challenger for the presidency. Standard