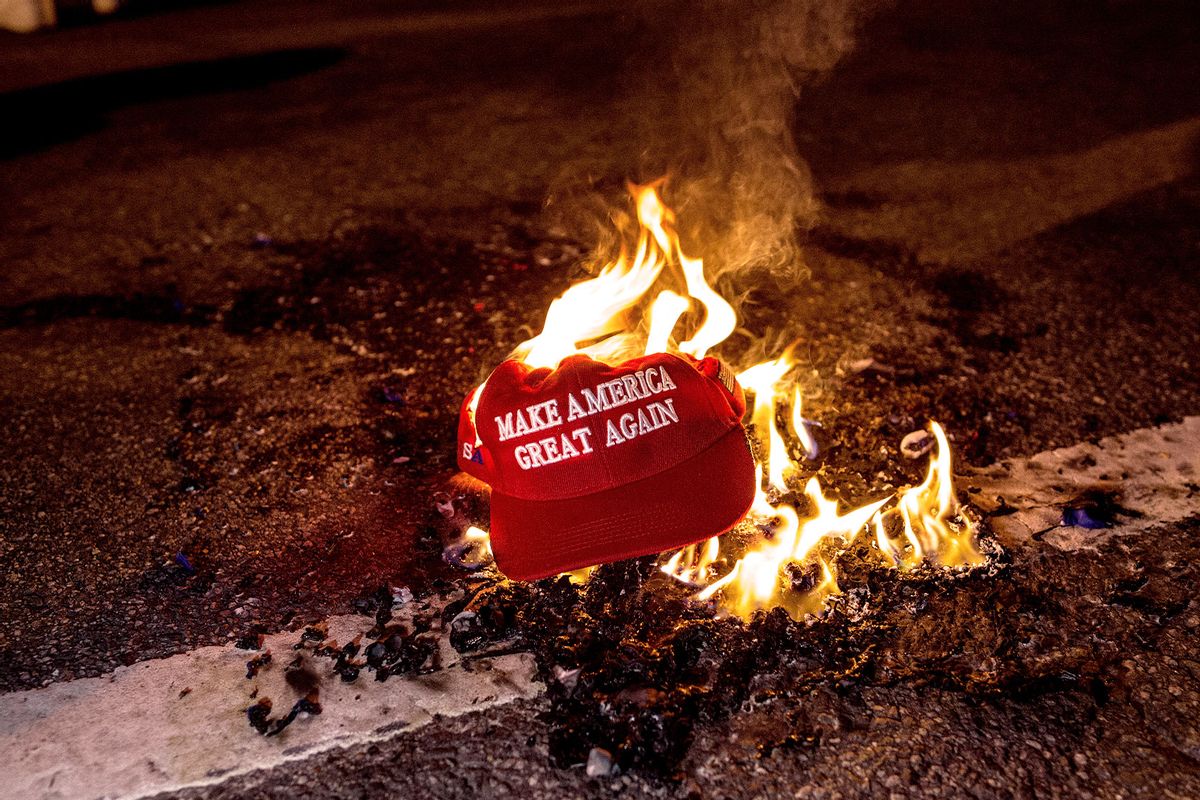 The problem with politics is that it’s a zero-sum game. There is a finite number of voters out there; every vote that you get is a vote the other side doesn’t get. That’s why the headlines following the FBI search of Mar-a-Lago were practically unanimous: “FBI search cements Trump’s hold on GOP,” screamed the Hill. “Trump’s dominance in GOP comes into focus, worrying some in the party,” was how the Washington Post put it.

Other headlines made the same point but tied Trump’s iron grip on the party to Liz Cheney’s primary defeat in Wyoming. “What Liz Cheney’s Lopsided Loss Says About the State of the G.O.P” was the New York Times take. “Liz Cheney and the Demise of Anti-Trump Republicanism” was the headline in a New York magazine story that framed Cheney’s fall as the death knell for the “ancien régime of conservative Republicanism as we knew it not so very long ago.”

And that was just on Wednesday.

Suffice it to say that political pundits and professionals are in agreement that despite — or even because of — all the scandals surrounding the former president, Trump has achieved an unprecedented stranglehold on Republican voters. But which voters is a question that’s not being asked. Sure, Liz Cheney got just under 30 percent of the Republican vote in a deep-red state, but the pundits seem to be ignoring the fact that it was Cheney who lost, not her voters. They stood by the Republican Party’s top Trump critic, a woman who announced upon her defeat that she would “do whatever it takes” to keep Trump out of the White House. Where do those people’s votes go now?

Television coverage of House races where the 10 Republicans who voted to impeach Trump were on the ballot showed people who questioned Trumpian orthodoxy being shouted down at town halls. Trump followers stole lawn signs supporting candidates who failed to adequately bow down to the Master. The New York Times reported, “The cleansing of Trump critics from the Republican Party is still in progress and so thorough that much of it now happens without Mr. Trump’s direct involvement. Allies at local and state parties, as well as at Republican-linked organizations, censure or oust those who break with the new orthodoxy.”

That doesn’t sound much like asking those people to stick around and vote Republican when there isn’t a Trump-endorsed or at least a Trump-loving candidate on the ballot. The problem with jettisoning every Republican voter or candidate who isn’t loyal to Donald Trump is that demographics already show that the party is going to need those people “going forward,” as the saying goes.

The problem with jettisoning every Republican who isn’t loyal to Donald Trump is that demographics already show that the party is going to need those people “going forward.”

This applies to candidates who have entertained the idea of running against Trump in the 2024 Republican primaries, if Trump decides to run for president again. Multiple stories have covered potential Trump opponents, like Florida Gov. Ron DeSantis, pledging allegiance to the Monarch of Mar-a-Lago after the FBI search of his home in Palm Beach. DeSantis appeared at a rally for Turning Point USA last weekend and criticized the FBI: “They’re enforcing the law based on who they like and who they don’t like,” DeSantis told the crowd of fresh-faced young Trumpazoids. “That is not a republic — maybe it’s a banana republic when that happens.”

The Hill quoted a Republican political consultant at the rally saying, “Any pathway for DeSantis to primary him from the right just closed completely shut if Trump decides to run. Our voters now want revenge, and I suspect that will manifest into them concluding the best way they can get revenge is by sending Trump back to the White House.”

The Republican Party is doing everything it can to banish from its ranks anyone who is deemed insufficiently loyal to the former president, especially the so-called “impeachment 10,” the Republican House members who voted to impeach Trump after the Jan. 6 Capitol assault.

Steve Benen, who writes for the Maddowblog on MSNBC, reported — yes, on Wednesday again — “As members of the Impeachment 10 can attest, it would also be a mistake to downplay Trump’s influence — especially when the former president, fueled by a petty sense of vengeance, is determined to destroy the careers of specific members of his party. What mattered was that much of their radicalized political party wouldn’t tolerate their heresy, which would overshadow every other part of their careers in public service.”

Cheney’s defeat wasn’t just the defeat of an anti-Trump Republican. It was a defeat for what were once known as “movement conservatives,” the group of Republican leaders who had molded the party in their own image as being for tax cuts and national defense, and against anything “liberal,” especially abortion and government handouts. It was, in short, the party of former House Speaker Newt Gingrich. But what does Newt have to say today? Well, interviewed by the Hill for its story about how the FBI search had strengthened Trump’s hold on the party, Gingrich said, “On the Republican side, with the exception of never-Trumpers … virtually everybody else assumes the FBI is corrupt. They assume the Jan. 6 committee is a fake committee covered by fake news, and they presume there is an effort to martyr Trump. If they keep this up, he won’t have a major opponent for the primary.”

Democrats have a lot to run on in the midterm elections, which are now less than three months away. They’ve got lower gas prices, passing the “Inflation Reduction Act” and the Dobbs decision overturning Roe v. Wade, but so far they have been only too happy to make Trump the big issue. Trump has done his part to help them as several of his endorsed candidates appear to be failing. Mehmet Oz is behind John Fetterman in his race for the Senate in Pennsylvania. J.D. Vance is about even with Rep. Tim Ryan, or slightly behind, in Ohio. Hedge-fund bro Blake Masters is trailing Sen. Mark Kelly in Arizona, and Herschel Walker continues to walk into walls in his campaign against Sen. Raphael Warnock in Georgia.

If Trump decides to run in 2024, and that doesn’t seem like a very big “if” at this point, it’s pretty clear he will run as a single-issue candidate: The 2020 election was “stolen” from him. Full stop. The search of Mar-a-Lago is just gravy, and there’s sure to be more gravy to come as he faces grand juries in Washington, D.C. and Fulton County, Georgia, not to mention the continuing saga unfolding before the Jan. 6 select committee in Congress.

Trump’s base is apparently prepared to stand by his side. A poll conducted last month by Monmouth University revealed that an astonishing 61 percent of Republicans believe Jan. 6 was a “legitimate protest.” Fifty-eight percent told pollsters they believe that only by “voter fraud” did Joe Biden win the 2020 election.

If Trump runs in 2024, he’s a single-issue candidate: The 2020 election was “stolen.” That’s already the past: Where do those voters go when he’s gone?

But the question remains: Where do these voters go when Trump is gone, either because he loses the 2024 presidential race and is once again unable to overturn the results, or because he is convicted of a crime that carries a ban on holding further federal office? At least one of the federal statutes for which Trump is under investigation supposedly carries that penalty, and although it’s not clear that a law passed by Congress can prevent someone from becoming president, it’s pretty much beyond argument that if Trump were to run and lose in 2024, he would be way too old to run again in 2028.

When Trump isn’t on the ballot — and he’s only got one more shot at doing that — how much power will pledging allegiance to his legacy have in the Republican Party of the future? Can Trump maintain his iron grip on the Republican Party from the political grave? I’m sure the whole “owning the libs” thing will still motivate the Republican base, but with Trump having patented that particular political tactic, will others be able to make it work as well?

This might seem almost too delicious to contemplate, but it just may be that the name “Trump” has been the magic elixir that stoned the masses for the past six years, and that once he’s gone it will lose its twisted power. Whether Republicans will turn out to stand in line at polling places when their drug of choice is no longer available may well be the great question of our political future. Your guess is as good as mine about what the answer is, but for now, the lesser “leaders” of the Republican Party aren’t spending much time contemplating life after Trump. That may be their biggest mistake of all.

about the endless afterlife of our 45th president