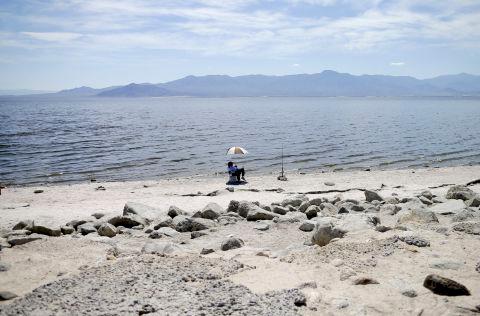 People have been fighting Salton Sea shrinkage, salinity and stench for decades without much success. But now the local economy could be headed toward a boom.

“We have what some have described as the Saudi Arabia of lithium,” Newsom told reporters in unveiling his $286-billion state budget proposal, referring to that country’s vast oil reserves.

“California is leading the world in forging an oil-free future,” the governor said. “We will not sell [new] traditional gas-powered, internal combustion engines by 2035. This is dramatic. It’s profound.

Newsom is proposing $350 million in tax credits that lithium entrepreneurs can apply for — plus regulatory streamlining to cut the lengthy, frequently agonizing process of obtaining government permits for their projects.

He’s asking for $100 million in tax credits annually for three years to help finance “pre-development” of any kind of clean energy. But this is clearly aimed at aiding the budding lithium industry. The money could be used for things such as engineering, equipment and infrastructure.

California’s largest and most troubled lake has been shrinking and becoming more saline for nearly three generations. Once thriving resorts have been abandoned and it’s no longer a popular vacation destination.

An estimated 97% of its once-abundant fish have died off, most rotting on the beaches. Waterfowl no longer find it a pleasant resting spot on their winter migration, largely because the edible fish have all but vanished.

Created in 1905 by a levee break that allowed Colorado River water to flow into the Imperial Valley, the shallow lake was about 15 miles by 35 miles. But it has been receding as farmers used water more efficiently and there was less irrigation runoff into the lake.

As the lakebed became exposed, desert winds sent clouds of toxic dust into nearby communities — some even reaching the Los Angeles basin. The place had a rotten egg smell.

People have been working on all that but making little progress.

Lithium could at least be an economic salvation, providing hundreds and potentially thousands of good jobs. And, if that happened, perhaps enough resources could be generated to mitigate the lake problems.

“The value of lithium has gone up and up,” says Dee Dee Myers, director of Newsom’s Office of Business and Economic Development. “We need more battery storage. It turns out that this part of California has one of the world’s largest reserves of lithium.”

And if the lithium can be tapped in great quantities, Newsom and energy companies are thinking, the Salton Sea area could become a prime site for a satellite industry: battery manufacturing.

Karen Douglas, a member of the California State Energy Commission, says it’s estimated that within two years, California could produce nearly a third of the global lithium demand.

“Lithium is obtained from brine.

Extracting it is like drilling for oil. You drill from a derrick a mile or more into the earth and pump out water. The lithium is removed from the brine. Then, around the Salton Sea at least, the water would be injected back into the ground.

“It’s 75% water and 25% gunk. Solid gunk,” says Jonathan M. Weisgall, vice president for government relations of Berkshire Hathaway Energy. “The challenge is to get the lithium out of the gunk in an environmentally responsible and economically viable manner without getting out the other stuff.”

Weisgall says Berkshire Hathaway is operating two demonstration plants at the Salton Sea and hopes to begin commercial operations in 2026.

His company already has received two government matching grants totaling $26 million — one from the state, another from the feds — and has matched each with its own money.

“We would not be putting in this sort of resources if we did not think there was a high-level prospect of success,” Weisgall says.

This may not be another 20th century oil boom or 19th century gold rush for California. But it may be for people around the Salton Sea.