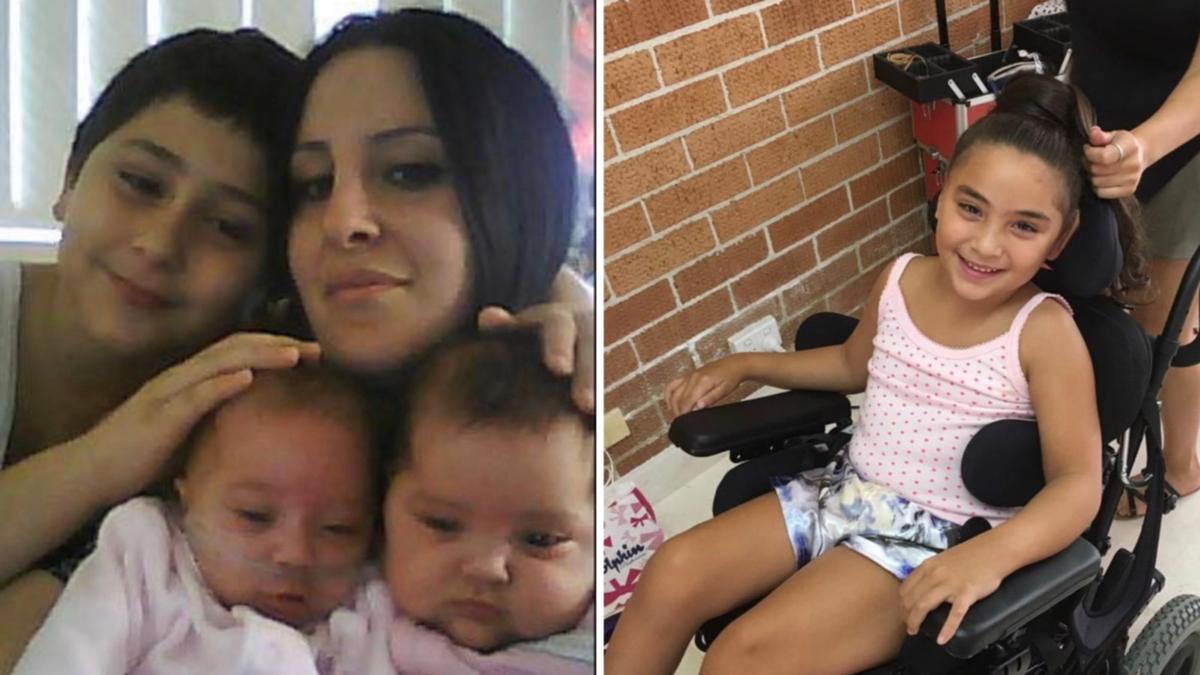 Chanel and Destiny are identical twins who, at 11 years old, love life, keep up with each other and engage in occasional sibling rivalry just like any sisters might.

Their mum Dolly bursts with pride at both her daughters, but feels especially blessed about what she has been able to learn through Chanel.

The first-born twin has Cerebral Palsy – and throughout her young life has shown that being differently abled doesn’t define who you are.

“I look up to Chanel and I thank the world for giving her to me,” Dolly tells 7Life.

The Sydney mum now beams over her daughters, although she concedes it hasn’t always been “smooth sailing”.

It was during Dolly’s first routine pregnancy scan that the technician told the mum-to-be she was expecting just one child.

Filled with excitement, she headed out and began eagerly purchasing baby items for her new addition.

But a few weeks later, she began experiencing cramps and headed straight to the doctor.

An ultrasound revealed the mum was carrying not one but two babies.

But her pregnancy wasn’t progressing as it should have been.

While each twin was in their own amniotic sac, Destiny and Chanel were sharing just one placenta – meaning they were at risk of not receiving enough nutrients to develop.

“Doctors didn’t know exactly what would happen but they just knew there would be issues. I was even told they might be conjoined,” Dolly says.

Considered a “high-risk pregnancy”, the shock revelation brought her to tears – and from that moment Dolly was under the watchful eyes of medical staff.

“It was really hard to comprehend, but I was monitored and they were growing fine … everything seemed fine,” she adds.

Then Destiny began missing her milestones.

Measuring two weeks behind Chanel, it became clear that Destiny was receiving fewer nutrients from the placenta than her twin sister.

“They told me I should terminate Destiny so Chanel could continue to grow and thrive,” Dolly says.

With the possibility of losing both her daughters weighing on her mind, the mum thought long and hard about sacrificing one to save the other.

“At the end of the day, I just couldn’t … I couldn’t do any procedure,” Dolly explains.

Going against the doctor’s suggestion, Dolly wanted to give Destiny every chance at life.

Looking back, the mum is shocked at doctors’ advice to terminate Destiny, who is now a happy, thriving pre-teen.

Every week, Dolly was monitored closely, but Destiny was still measuring a fortnight behind her “stronger and bigger” sister.

During her 28-week routine check-up, Dolly was told she was in premature labour.

“They gave me a tablet to stop my labour and then an injection in my leg to help mature the girls’ lungs if they were to come early,” she explains.

Despite doctors’ best efforts, Dolly’s labour continued to progress and she had to have an emergency C-section at 10pm that night.

Prepared for the worst, Dolly was told her girls might weigh less than 500grams.

Heartbreakingly, specialists predicted the twins were unlikely to take their first breath.

“I didn’t know if they were going to be okay – it was too early to give birth,” Dolly says.

“I couldn’t see them but I heard Chanel cry which gave me a bit of peace – I remember saying, ‘she’s made it’.

“But I didn’t hear Destiny… I didn’t know if she made it.”

Both girls were taken to the NICU, where specialists surrounded them keeping them alive by machines.

And at 1am, Dolly finally met her two precious babies.

“They were so fragile and I couldn’t touch them,” she recalls.

“Honestly, I didn’t know what a tiny baby was until I saw them.”

Both girls were born above their predicted weight, with Chanel weighing 1.4kg and Destiny a tiny 1kg.

For weeks they were in a humidicrib, and both continued to progress beyond doctors’ expectations.

Then a brain scan revealed the heartbreaking truth behind their premature birth.

Despite Chanel having appeared stronger than Destiny throughout the pregnancy, Chanel’s brain had suffered irreversible damage.

“She could be a vegetable – she probably would never talk, walk or just be able to do anything basically.

“At first what they were telling me didn’t register, I couldn’t say anything to them.”

At home, Dolly broke down.

Confessing she was an “emotional wreck”, the mum began processing the news of Chanel’s disability.

“I wanted to give her the life she deserved,” Dolly says of her mind shift.

“I never wanted to give up my girl and I never did.”

She spent every moment by both Chanel and Destiny’s side, and each day her girls became stronger.

The twins were too young for a formal diagnosis so the family had to wait and watch Chanel’s development.

As Destiny blossomed, Chanel devastatingly lagged behind in her milestones.

And just after the twins’ first birthday, Chanel was diagnosed with Cerebral Palsy.

But instead of the diagnosis bringing Dolly to tears, it spurred on her fight to teach her little girl to dream big.

The family focused on Chanel’s treatment, even flying to America for unique therapy – and her hard work and bravery began to pay off.

“Her life… she is just amazing,” Dolly beams.

“She has to work so hard just to lift her hand up to colour in but that doesn’t stop her.”

“She is a quadriplegic but that doesn’t define who she is.”

The mum says that after recent surgery to lengthen and straighten the muscles in her legs, Chanel is working hard at using her walker independently.

While she uses a wheelchair to get around it doesn’t stop her from keeping up with Destiny – with the mum explaining the two girls squabble like any sisters.

She has a thirst for learning, is a magical storyteller and dreams of being a Broadway singer.

“I look up to her,” Dolly says of Chanel.

“To the parents who had children with cerebral palsy, know that there is always light at the end of the tunnel. Don’t give up.”

Dolly wants everyone with Cerebral Palsy to reach for the stars, just like Chanel is.

Chanel is one of the inspiring “trainers” sharing her story for STEPtember – an initiative that encourages Australians to take 10,000 steps a day to fundraise for people living with CP.