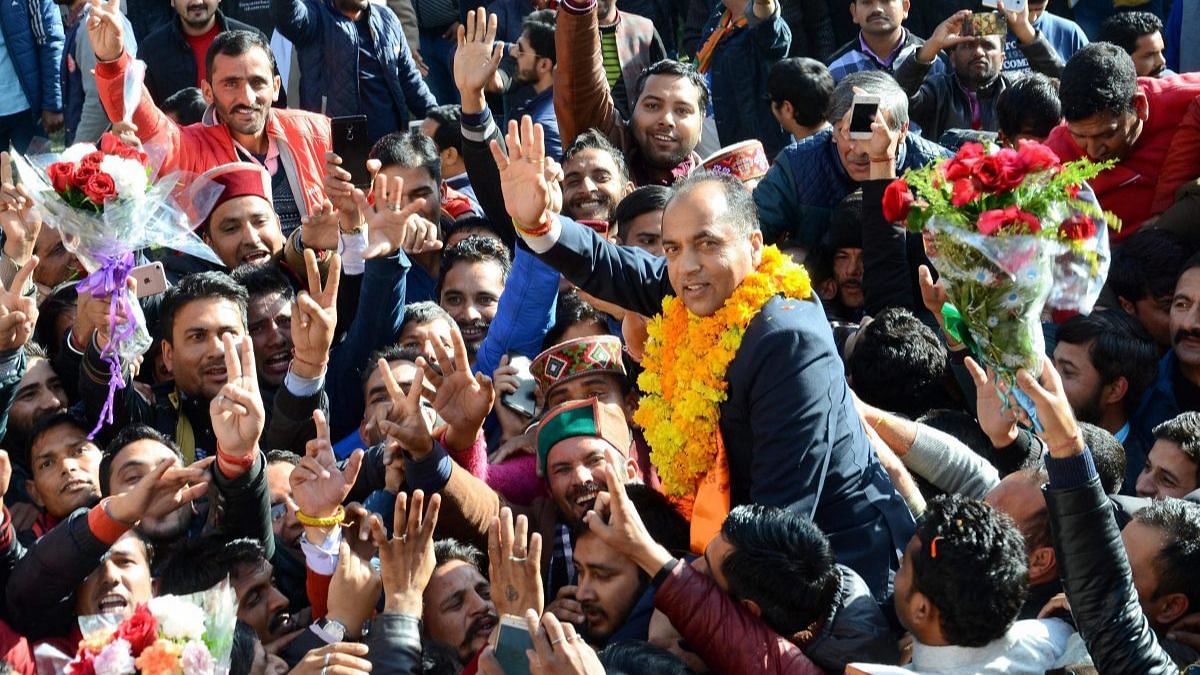 New Delhi: Four months before the assembly poll in Himachal Pradesh, the Bharatiya Janata Party (BJP) government is facing the wrath of apple farmers over high input costs and its alleged failure to protect their interests.

Apple growers have considerable political influence in Shimla district — where up to 70 per cent of the state’s apples are grown — and Kinnaur, Solan and some parts of Mandi and Sirmaur. Together, these districts form the apple belt in Himachal and include around 20 of the 68 Assembly constituencies where the BJP needs to cool down tempers before the polls.

The apple growers have been complaining that 6 per cent hike in GST on packaging cartons and non-availability of subsidy on fertilisers have raised input costs on trade.

As many as 27 growers’ associations, under the banner of Sanyukt Kisan Manch (SKM), held protests last month in several districts including Rohru, Theog, Kotkhai, Narkanda, Rampur, Nirmand, Kinnaur, Mandi, and Shimla. Apart from warning of a large agitation at the state secretariat in Shimla on August 5, these associations have also threatened to boycott the election if their demands are not met.

“Input costs for apples have doubled in the last three years but income has not gone up at the same rate,” SKM convener Harish Chouhan told ThePrint.

A senior BJP leader told ThePrint: “If such protests persist till poll season, it may jeopardise the party’s prospects in the apple belt.”

In the wake of the state-wide protests, Chief Minister Jai Ram Thakur held a meeting with apple growers on 28 July. The Himachal government announced some concessions for addressing some of the concerns of apple growers.

The constitution of a committee was announced, along with restoration of the old system of providing fertilisers through government outlets and subsidy to make up for the hike in GST.

But the growers, who are demanding withdrawal of the GST hike, are unfazed with the move. Sanjay Chouhan, a farmer from Kotkhai region and a SKM functionary, told ThePrint: “By the time the committee will submit its report, the apple season will be over. Also, there is no representative from the farming community in the panel, whose members were selected by the CM. It looks like the state government is not serious about resolving issues concerning the apple growers.”

On the subsidy announced over GST, he said that most farmers have already purchased the costly packaging material.

RK Pruthi, director of horticulture in Himachal Pradesh, told ThePrint: “Most demands of farmers have been accepted by the government, but price is determined by many factors such as quality of apple and demand versus supply situation.”

“The state has announced subsidy to compensate for the GST hike, and agreed to provide fertilisers through the Centre. The government will also form a horticulture board which was one of the demands of the farmers. To resolve other issues, a high-level committee has been formed,” he added.

In Himachal, the area under apple cultivation makes up 49 per cent of the total area under fruit production with around 1.7 lakh families depending on it. Apple economy is estimated to be Rs 5,500 crore, according to a report.

The main pain point for the apple farmers has been the rise in input costs. Chouhan cited two factors, including the hike in GST on packaging material from 12 per cent to 18 per cent last year.

“The second factor is an increase in price of fertilisers in the open market. Earlier, the government also used to provide pesticides and fungicides through its outlets at subsided rates, but this has stopped in the last two years. The subsidy is also not coming. Earlier, 50 kg of pesticide cost Rs 255, which is now Rs 1,740 in the market. This has raised the cost of farming while the price of apples is falling every year,” Chouhan added.

The apple growers are also demanding introduction of Minimum Support Price (MSP) for A, B and C categories of apples like it was done in Jammu & Kashmir.

“Through the Market Intervention Scheme (MIS), rates were fixed to procure A grade apple at Rs 60, B grade at Rs 44 and C grade at Rs 24 in Jammu & Kashmir. But in Himachal, the government has no MSP-based procurement system. Only state agency APMC purchases C grade apples for jams and juices at Rs 10 a kilo while the cost of cultivation is Rs 40 to 50 per kilo. Farmers are getting just Rs 70-80 for A grade apples. The same apples are sold by Adani for Rs 200 a kg in the open market,” said Chouhan.

Apple imports from Chile and Iran have aggravated problems of farmers. “We have demanded that import duty be hiked to 100 per cent, and dues of Rs 40 crore owed by Himachal Pradesh Horticulture Produce Marketing and Processing Corporation (HPMC) and Himfed be released to farmers,” said Chouhan.

On the MSP scheme, Pruthi said: “The Jammu & Kashmir scheme was only for Covid times, so the same demand for Himachal is not feasible.”

The BJP currently holds only two of eight Assembly seats in the key apple growing region of Shimla.

According to a second senior Himachal BJP leader, “the main problem is lack of communication by the government with farmers. The CM has held only one meeting with the apple growers’ association but it will not work in election year”.

“Horticulture minister Mahender Singh Thakur has no ties with the apple growers. He doesn’t interact with them regularly. Earlier, horticulture minister Narendra Bragta was from the apple belt, and such protests never happened. He immediately used to intervene to address the problems,” the leader added.

Meanwhile, the Congress which last year won three seats in the Himachal Assembly bypoll and one crucial Lok Sabha seat of Mandi, is targeting the BJP government for “ignoring” the concerns of apple growers. The opposition party has assured that all farmer issues would be addressed once it returns to power.

Another BJP leader told ThePrint: “Most farmer association leaders are from Congress or Left background, while leaders with Right-wing links have less influence here.”

The leader referred to former Congress chief minister Virbhadra Singh, who had roots in Shimla district, and former state horticulture minister Vidya Stokes in the Congress government, also an apple grower. “Rakesh Singha, another apple grower and CPM MLA from Theog constituency, also has a stake in the association. This is another reason why protests have been prolonging despite state government assurances,” the BJP leader said.