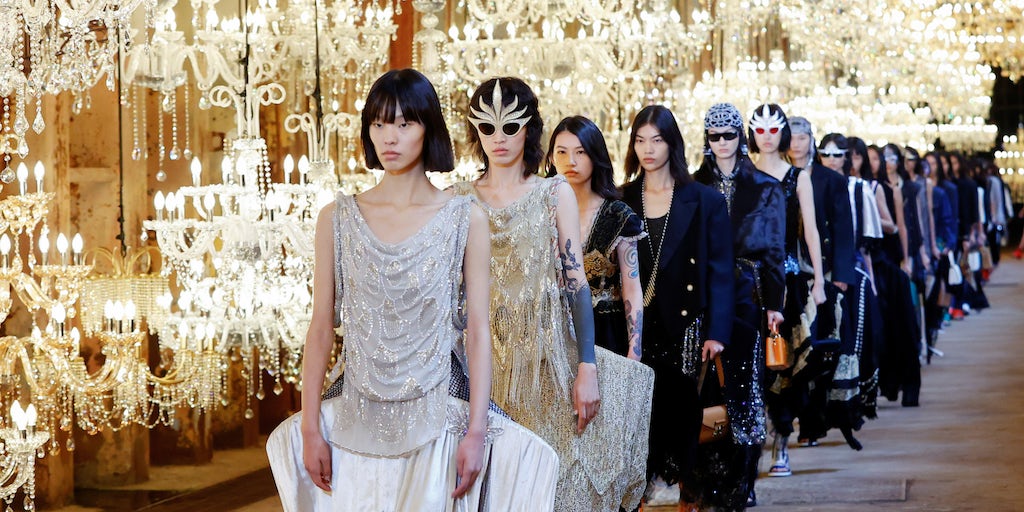 Shanghai’s shipyard repair docks were transformed on Wednesday evening, adorned with 1,800 custom-made chandeliers in order to serve as the backdrop for the latest outing of Louis Vuitton’s Spring/Summer 2022 collection.

On top of the 43 looks originally shown in Paris, an additional 19 were designed by Nicolas Ghesquière for the Shanghai show. Louis Vuitton’s creative director wasn’t in attendance but sent a recording of his best wishes to the crowd of celebrities, media and Louis Vuitton’s top-spending local clients in attendance.

In total, around 1,000 people were at the show by the banks of the Huangpu River, with house ambassadors Liu Yifei and Zhou Dongyu (who was announced as a house ambassador by Louis Vuitton the day before the show), alongside other celebrity attendees, including Dilraba Dilmurat, Zhang Ziyi and Ouyang Nana driving social engagement. At the time of writing, the campaign hashtag #LVSS22WomenswearShow has more than 500 million views.

According to the brand, livestreams of the show, which was closed by Chinese supermodel Ju Xiaowen and simultaneously broadcast on platforms Weibo, WeChat, Tencent Video, Douyin, Kuaishou and OTT, were viewed 158 million times.

How Did LVMH Fashion Get Back to Double-Digit Growth Already?

The answer has a lot to do with Louis Vuitton, Dior and the Chinese market. BoF breaks down the key factors behind the rebound.