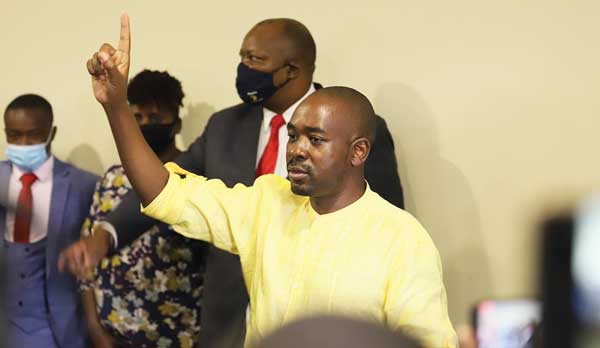 Today is the people’s President’s birthday. In Zimbabwe, there is a court President declared by the country’s captured Judiciary.

Source: Luke-ing the Beast in the Eye: Chamisa the person and Chamisa the moment …. a birthday epistle – The Zimbabwean

Then there is a people’s President who exudes a natural, effortless charm in his nexus with the ordinary citizens. It is the people’s President who turns 44 today is a mortal being and has his own frailties like the rest of us but that does not detract from his own contribution to the moment that is upon us as a nation.

Nelson Chamisa is undoubtedly the man of the moment and is currently Zimbabwe’s best foot forward as we stand on the cusp of a watershed plebiscite in 2023.

As I execute my civic responsibilities of urging my fellow citizens to vote by exhorting voter registration in Pote ward 5 in my beloved hood of Domboshava today, I am fully cognisant of the political moment of change whose yellowish flicker beckons in the horizon.

Ours is a yellow moment. A golden moment. The signs are clear that this our tenuous society is definitely pregnant with a new one.

While the yellow, golden, citizen’s movement was born last week, a new prudent leadership will hit the ground running and transform our country soon after its rebirth at the electoral hatchery that is the 2023 election.

Today, as a citizen writing on his President’s birthday, I re-publish an edited version of an earlier piece that I wrote some four years ago in April 2018. Indeed, we must all reflect on the historic political moment currently unfolding before us.

It all began in 2016 when the then MDC President Morgan Tsvangirai appointed a then 38-year-old Adv. Nelson Chamisa as one his two additional Vice Presidents following his diagnosis with cancer of the colon on 27 June of the same year, which appointment signified a novel moment in the politics of a young country long used to gerontocracy or simply rule by old people.

From that day in August 2016, President Tsvangirai showed he was a modern leader alive to the dictates of 21st century politics in which the youth are not the leaders of tomorrow but are the leaders of today.

Since then, Adv. Nelson Chamisa has become more than just a political persona. He has infused an epic moment of generational re-invigoration that has reverberated well beyond the narrow precincts of his generation.

Through his appointment of Chamisa as one of his deputies, those of us who shared intimate discussions with president Tsvangirai and were privileged to sanctioned forays into his thinking knew the exact message he was sending to the world.

It was not just a message about his succession preferences but a harbinger of younger things to come; a sonorous pronouncement of a new political moment that would excite a hitherto unnoticed generation and the nation at large.

From the outset, it was never about Chamisa the physical being, even though it was Chamisa the person who reaped the huge advantage for having been the loyal protégé who had traversed a long and arduous journey with the iconic political tutor since 1999.

Indeed, it was never about Chamisa the protégé to the iconic political master. It has always been about the moment. For the moments that people spawn in their lifetimes have always been bigger than the personalities.

Chamisa the person may have been the direct beneficiary of that mammoth gesture of being appointed into the cockpit of a great people’s movement that he had helped found as its founding youth chairperson. But for me, it is Chamisa the moment that has always been the more profound message.

True, there is a causal relationship between Chamisa the person and Chamisa the moment because the latter is a direct consequence of—and a derivative from—the former.

Yet it is the moment—and not the person—that appears to have struck both massive resonance and untold trepidation into the hearts of friend and foe respectively.

The Chamisa moment represents an ostentatious generational entrance into the grand leadership politics of the country, particularly in a country where 60 year olds are regarded as young. The case of a then 61-year old Absolom Sikhosana who in 2013 sat in the ZANU PF politburo as the party’s youth chairperson is a case in point. It must be stated that th 61-year old Sikhosana was the same age as Morgan Tsvangirai, who was running against Mugabe in the 2013 election.

Perhaps Tsvangirai could have been a member of the party’s youth structures had he been Zanu PF.

But that is a story for another day.

Tsvangirai’s appointment of Chamisa into the party Presidency represented and communicated newness, energy, freshness and transformation. It is Tsvangirai, the doyen himself, who triggered the political moment that we enjoy today here in Zimbabwe.

Chamisa the moment is the true acme of youthful enthusiasm and dynamism that was discovered, nurtured and anointed by Tsvangirai himself.

I should know better on this one one!

As a political epoch, the Chamisa moment represents a ground zero moment—-in simple terms a fresh and innocent start. The yellow, golden movement is just but cementing a journey that Tsvangirai kickstarted in August 2016.

While Chamisa the person is mortal and has frailties like all of us, Chamisa the moment exudes pure virtue and innocence. The moment—and not the mortal person— represents a generational honesty and chastity incapable of sin and transgression.

It is clear that Chamisa the moment is bigger and more phenomenal than Chamisa the person.

Zimbabweans across the political and generational divide appear to be appreciating the Chamisa moment that has engulfed the country.

Yet some have had the temerity to call it a cyclone but as a political scientist, I have always been sceptical of superlatives particularly when used on mortal and fallible human beings.

Chamisa’s personal attributes of oratory and erudite articulation of issues notwithstanding, it is Chamisa the moment that has taken the country by storm. In fact, this treatise will argue that Chamisa the person, as a mortal being, should be wary of being an impediment to Chamisa the moment.

In short, if he drops guard of his political calculus and the faith and trust Zimbabweans have reposed and continue to repose in him, Chamisa the person may become a threat to Chamisa the moment. As a person in whom the nation appears to have invested so much hope—and I write here as a political scientist and not a deputy secretary for Presidential Affairs in his office — Chamisa the person must be careful not to turn out to be a burden or a needless irritation to the enormity of the political moment!

The good news is that so far, he has carefully managed to traverse with due care this delicate but narrow terrain that separates Chamisa the person from Chamisa the moment!

Those who regard themselves close to him may not know that being close to him is not synonymous with being in the proximity of the moment. The moment is a far much higher cardinal that has its own gargantuan life. The enormity of the moment is dramatised by the popularity that met his excursions into the country’s rural hinterland as well as the massive resonance the yellow movement has found with the ordinary Zimbabweans.

That the whole nation has fallen friends with the yellow moment is now preposterous.

Chamisa the person is rational and calculating and his political decisions may stand in the way of the political tsunami that Chamisa the moment has become.

The decisions Chamisa the person takes may stand in the way of the sweeping Chamisa moment, much to the detriment of the freshness that Zimbabweans have so readily welcomed!

Yet so far, Chamisa the person has managed to enhance—and not impede— Chamisa the moment. He appears to fully appreciate the enormity of the political dividend that the moment, through the person, will bequeath to Zimbabwe!

There appears to be an inter-generational consensus that in 2023, the moment will take us to the solution to the political challenges that have bedevilled this country for many years.

Like the luminary and visionary that he was, President Morgan Tsvangirai had this giraffe blessing of peering into the political realities that lay ahead.

On 3 August 2016, in a historic speech to the national council following his appointment of Chamisa as Vice President, the doyen of democracy said:

“ I took into consideration the fact that my visits across the country have revealed that the party has lost young voters , whether consciously or unconsciously . You agreed with me that I have _ _to respond to that key constituency which now constitutes over 60 percent of the country’s voting population . We have to project the MDC as a modern , 21st century political party in which the youth can rise to the top ….”

President Tsvangirai had long seen the political dividend of Chamisa the moment which Chamisa the person may today, by acts of omission or commission, choose to either enhance or undermine. The regime has tried to halt the momentum of the moment but they have failed and they will continue fail.

Indeed, to enrich or to impede the moment, that is my boss’ choice!

As English playwright William Shakespeare wrote in Hamlet all those centuries ago:

Yes, Moyondizvo, the choice to either retard or enrich this enormous moment is entirely yours!

Thus far, we are on course as the country remains engulfed in the politics of Chamisa the moment with its imminent prospects of bringing positive change in the lives of the citizens.

Luke Tamborinyoka is the Deputy Secretary for Presidential Affairs in the Citizens Coalition for Change led by Advocate Nelson Chamisa. He is a multiple award-winning journalist and a political scientist who won the Book Prize for Best Student when he graduated with a BSc (Hons) degree in Political Science at the University of Zimbabwe a few years ago . You can interact with him on his Facebook page or on his twitter handle @ luke_tambo