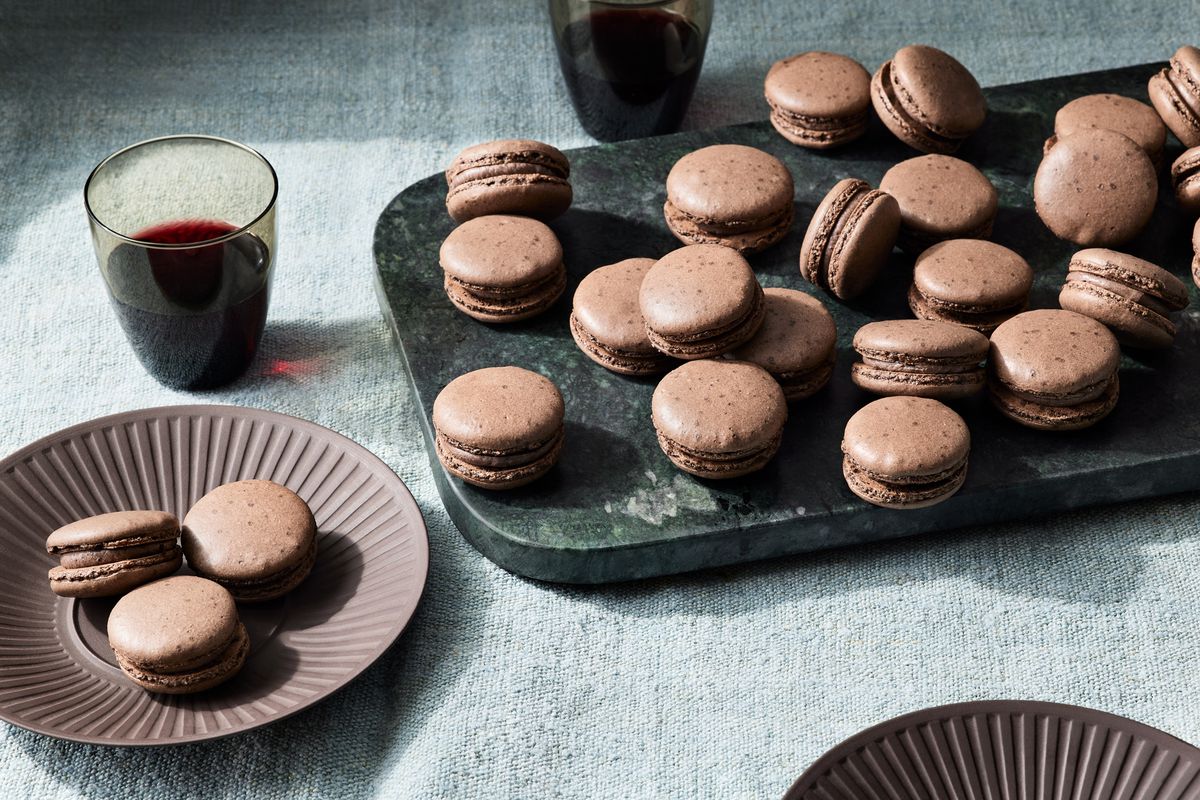 I’m just going to get straight to the point: coconut macaroons (two o’s) and French macarons (one o) are not the same cookie. Sure, they’re both meringue-based, gluten-free, and sweet as a candy store, but that’s about where the similarities end. To start, we need to talk basics: French macarons (pronounced MACK-uh-rons) are essentially the chicest sandwich cookies in the schoolyard. Two thin meringue cookies no wider than an inch or two are layered with a ganache, buttercream, or jam filling. Macaroons (pronounced mack-uh-REWNS), on the other hand, are made with flaked coconut, whipped egg whites, sugar, and vanilla extract.

According to The Atlantic, French macarons aren’t exactly who they say they are. “The cookies were born in Italy, but made their way to France in the 1530s—by way of, some scholars believe, Catherine de’ Medici,” wrote staff writer Megan Garber in 2014. “They wouldn’t become widespread outside of court, however, until 1792, when two Benedictine nuns, seeking asylum during the French Revolution, supported themselves by baking and selling treats made of ground almonds, egg whites, and sugar. The ad hoc pastry chefs came to be known as ‘the macaron sisters.’”

Who could blame them though? I, too, aspire to be a chic French woman who effortlessly wears a crisp white button-down and red lipstick to bed. Let’s take a look under the hood and see how macaron and macaroon recipes differ.

Feeling Fancy? Make One of These Classic French Desserts

The 5 French Mother Sauces Every Cook Should Know

How to Make Macarons, One O

French macarons are made with almond flour, egg whites, confectioners’ sugar (aka powdered sugar), granulated sugar, and vanilla extract. Chocolate macarons will likely call for cocoa powder, too, and other flavors like raspberry or pistachio macarons may use food coloring to get a bright pink or soft green hue.

To make the cookie batter, almond flour and confectioners’ sugar are sifted together several times to get a super light, clump-free mixture. In a separate bowl, whip the egg whites until foamy, then slowly stream in granulated sugar and vanilla extract and continue whipping until stiff peaks form. Once the whites are super glossy and hold their shape, add about half of the almond flour mixture to the bowl and use a silicone spatula to combine. “You’re intentionally starting to deflate the batter to get it close to the ideal texture,” explains Food52’s Resident Baking BFF Erin Jeanne McDowell. Add the remaining almond flour mixture to the batter, then fold gently to incorporate with a spatula. From here, transfer the batter to the prepared piping bag and pipe the batter into perfect round cookies on a parchment-lined baking sheet.

Let the macarons rest at room temperature for 30 to 60 minutes, until they form a skin on the surface. The time it takes totally depends on the climate; the drier your home, the faster this process will go. I’m currently sitting in a 78°F house with the heat blasting because it’s 8°F outside, which means that the skin will likely form in about three seconds.

From here, bake the macarons for about 20 minutes, until they have risen and formed a “foot” (the bubbly, crackly layer on the bottom), and the top of the cookies appear shiny and dry.

Once the macarons are cool, gently peel them off of the parchment paper and top half with a whipped ganache or gam, then carefully place a cookie of equal size on top and press down gently. Take a bite like you’re Blair Waldorf and bask in your glamour.

What to Do With All Those Extra Egg Whites

How to Make Macaroons, Two O’s

Whew. Are you exhausted after reading that? I am. Now it’s time for coconut macaroons to weasel their way in and say, “Hey, remember me? I’m not nearly that complicated.” Is making coconut macarons as simple as whipping egg whites until they resemble meringue and then dumping a few cups of shredded coconut into the bowl? Kinda, yeah! Here’s how Danielle Kartes makes them: Mix 6½ cups of shredded coconut, 1 egg, ½ cup of melted butter, 1 teaspoon of vanilla extract, ¾ teaspoon of flaky salt, and ¾ cup of sweetened condensed milk in a bowl. Keep mixing until everything is thoroughly combined. Using a large ice cream scoop, form big mounds and place them down on a parchment-lined cookie sheet. Bake until the coconut macaroons are golden brown, which should take about 14 to 16 minutes. Cool ’em, then eat ’em. Any questions?

If there’s one person who has perfected the art of baking, it’s Dorie Greenspan. So who better than her to turn to for advice on French macarons? In addition to her perfect macaron recipe, Dorie also shares tips on properly measuring your ingredients, using the right tools, and the importance of using room-temperature egg whites.

There’s a reason Erin Jeanne McDowell is Food52’s Resident baking BFF: because she knows that certain baking recipes, like French macarons, are intimidating and temperamental. So she set out to create an extra-chocolatey recipe that anyone could master.

We’re going to break our own rule and say that macarons don’t need to be individual petite cookies to qualify as the French treat. This recipe makes a few giant macarons, which are stacked and layered with cake-batter frosting for a sprinkle-cake-inspired dessert.

Two types of ginger—ground and crystallized—bring a warm, sultry spice to these sweet coconut cookies, which are totally gluten-free.

If you’re looking for an old-fashioned coconut macaroon recipe, this is it. Of course, you could (and probably should!) dip them in chocolate, but you definitely don’t need to.

Coconut macaroons have a tendency to be very sweet. I’m the last person who would complain about that fact, but even if you’re the type of person who wouldn’t eat sprinkle cake three times a day, these cookies will appeal to you. That’s because they’re made with browned butter, which introduces a nutty, caramelized flavor that offsets the sweetness from the condensed milk.

Do you prefer macaroons or macarons? Let us know in the comments below!