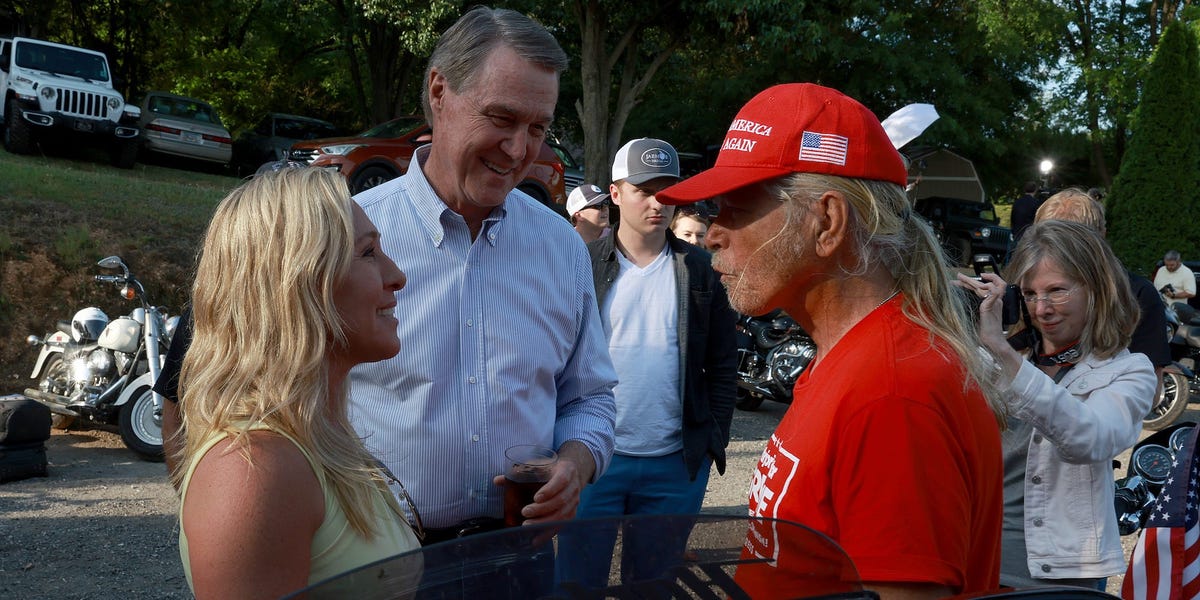 The grand entrance riled up everyone there to show Trump-backed candidates some love ahead of Tuesday’s GOP primary. Greene joined gubernatorial hopeful David Perdue, who is trying to chip away at incumbent Gov. Brian Kemp’s 30-point lead, and attorney general hopeful John Gordon at the Friday night rally, which took place in Greene’s congressional district.

Many of the attendees cheered for Greene as she emerged from the stripped-down Humvee with a campaign sign strapped to its back. Insider spotted at least a dozen people wearing Marjorie Taylor Greene campaign gear in the crowd of about 150 who gathered for the last-minute addition to Perdue’s closing weekend sprint.

“Marjorie Taylor Greene brought us out. We have been supporting her since day one,” district resident Christie Ellis, 50, said of her affection for the freshman lawmaker. Greene routinely stokes culture wars on Capitol Hill, has voted against nearly every Ukraine-related bill Congress has taken up since Russia invaded the neighboring country, and has taken advantage of the same proxy voting rules she has repeatedly criticized to skip nearly two dozen votes.

Greene immediately set to shoring up the support she’ll need to overcome her five GOP primary challengers. She worked the crowd by stopping to pose for selfies, took swigs of her Shock Top Belgian white ale after clinking bottles with beer-toting patrons, and said hello to the kids that star-struck moms rushed over to meet her.

“Like Donald Trump, she tells it like it is. You don’t have to read her mind,” Bikers for Trump founder and rally organizer Chris Cox said to raucous applause as he summoned Greene to the stage to say a few words. Cox also wrapped her in his Trump-branded vest, which Greene proudly sported as she posed for pictures on one of the motorcycles parked in the lot.

Perdue, who had ditched the blazer he was wearing earlier in the day while jet-setting from Augusta to Savannah for a campaign stop with 2008 GOP vice presidential nominee turned House hopeful Sarah Palin, rolled up his sleeves and mingled as well. Though he’d previously represented the area as senator, Perdue reintroduced himself to guys playing pool, awkwardly fist-bumped tattooed bikers, and snuck sips of his soda as others swigged frosty Coors Lights.

When it was his turn on the main stage, Perdue tried to fire everyone up by railing about the “rigged and stolen” presidential election, and how Kemp “sold us out.”

The 52-year-old local, who declined to give his name, didn’t fault Perdue for trying. But he said he wasn’t surprised Greene had stolen the spotlight, adding that he likes to play a game with friends and neighbors who fawn over her: he asks them to name the area’s prior congressional representative.

“No one knows,” the local said, shrugging off the erasure of five-term lawmaker Tom Graves’ public service as a consequence of a political system that rewards celebrity above civic duty.