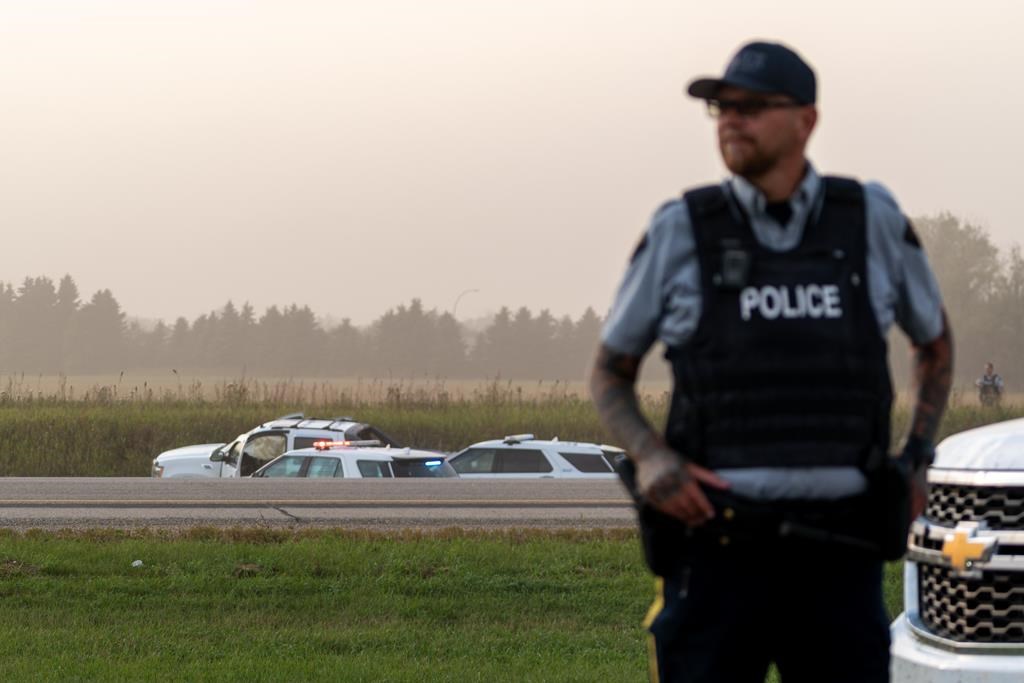 In The News is a roundup of stories from The Canadian Press designed to kickstart your day. Here is what’s on the radar of our editors for the morning of Sept. 8, 2022.

What we are watching in Canada …

The chief of a Saskatchewan First Nation devastated by a deadly stabbing rampage is expected to speak publicly a day after the suspect was arrested and then died in police custody.

A tense four-day manhunt for Myles Sanderson came to a close Wednesday, when police chased down a stolen vehicle and arrested the 32-year-old suspect on a rural Saskatchewan highway.

Sanderon was wanted on charges, including first-degree murder, after attacks on James Smith Cree Nation and the nearby village of Weldon on Sunday left 10 people dead and injured 18.

Most of the victims were from the First Nation.

Shortly after Sanderson was arrested, Saskatchewan RCMP said he went into “medical distress” and was transported by ambulance to a Saskatoon hospital, where he was pronounced dead.

The only other suspect, Sanderson’s brother Damien, was found dead near one of the crime scenes on Monday.

With both suspects dead, RCMP acknowledged the public may never learn the possible motivations behind one of Canada’s deadliest mass killings.

Canadian airlines will now be required to issue refunds to passengers on delayed or cancelled flights if they are not placed on a new one within 48 hours, including for some reasons outside the company’s control.

New Air Passenger Protection Regulations go into effect as the Canadian Transport Agency looks to close a loophole in previous regulations that left some passengers unable to get refunds after pandemic-related flight cancellations.

Previously, Canada’s passenger rights regime only required refunds for flight disruptions that were within the airline’s control, which excluded situations ranging from weather to unscheduled mechanical issues.

Critics have said some airlines were exploiting the policy by classifying recent widespread staffing shortages as a safety issue, which would exclude travellers from compensation under the regulations.

The original Air Passenger Protection Regulations were established in 2019, before air travel demand collapsed due to the COVID-19 pandemic.

As well as a cash refund, the ticket price may also be reimbursed through credit or vouchers and is to be paid in full by the airline within 30 days.

What we are watching in the U.S. …

Police in Memphis, Tennessee, said a man who drove around the city shooting at people, killing four, during an hours-long rampage that forced people to shelter in place has been arrested.

Memphis, Police Director Cerelyn “CJ” Davis said four people were killed and three others were wounded in seven shootings across Memphis. Police said he recorded his actions on Facebook.

What we are watching in the rest of the world …

The United States says it has evidence that “hundreds of thousands” of Ukrainian citizens have been interrogated, detained and forcibly deported to Russia.

Russia immediately dismissed the claim as “fantasy,” calling it the latest invention in a Western disinformation campaign.

The charge was made Wednesday at a Security Council session called by the United States and Albania to discuss Russia’s so-called “filtration operations.”

That involves Ukrainians voluntarily fleeing the war in their homeland and those being forced to go to Russia passing through “filtration points” where treatment allegedly ranges from interrogations and strip searches to being yanked aside, tortured and sent to a Russian detention center.

On this day in In 1987, Canadian scientists with the federal government confirmed that a large hole in the ozone layer had formed above the Arctic in the previous year. Days later, on Sept, 15, diplomats from around the world would reach an agreement to protect the ozone layer in a pact known as the Montreal Protocol.

The Toronto International Film Festival is rolling out the red carpets for what organizers pledge will be a return to form after two years of pandemic-disrupted events.

With 200 feature films and 50 shorts on the roster, TIFF CEO Cameron Bailey said the fest will serve as a reminder of what local cinephiles once had, and what they can have again.

Bailey will help kick off the festivities Thursday evening at Slaight Music Stage on King Street West — also known as festival street — where Buffy Sainte-Marie is set to perform.

The opening night film is Netflix’s “The Swimmers,” which is based on the true story of two sisters’ flight from war-torn Syria, directed by Sally El Hosaini.

Did you see this?

A former classmate to the new British prime minister while she attended elementary school in Burnaby, B.C., said Liz Truss was a bright and funny student with a “cool British accent.”

But to former Parkcrest Elementary School student Brenda Montagano, Truss is also remembered as a classmate with a witty sense of humour.

Truss attended the school for Grade 7 in 1987-1988, while her mathematician father taught at Simon Fraser University.

This report by The Canadian Press was first published Sept. 8, 2022.