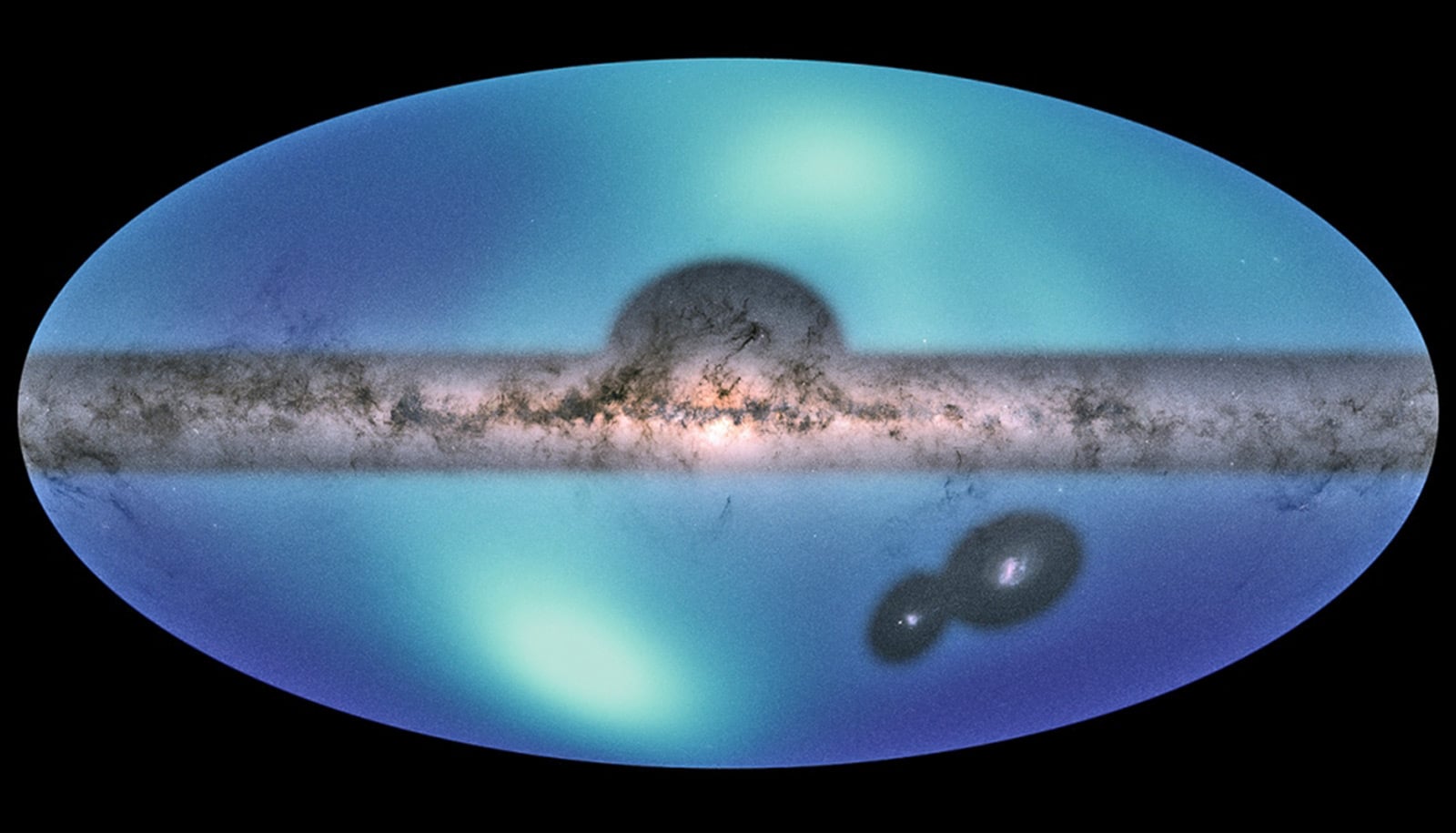 Astronomers have released a new map of the outermost region of our galaxy.

Known as a galactic halo, this area lies outside the swirling spiral arms that make up the Milky Way’s recognizable central disk, and is sparsely populated with stars.

Though the halo may appear mostly empty, scientists predict it contains a massive reservoir of dark matter, an invisible material thought to make up the bulk of all mass in the universe.

The new map, which appears as part of a paper in Nature, reveals how a small galaxy called the Large Magellanic Cloud—so-named because it is the larger of two dwarf galaxies orbiting the Milky Way—has sailed through the galactic halo like a ship through water, its gravity disturbing the halo and creating a wake in the stars behind it as it orbits the Milky Way some 130,000 light-years from Earth.

Previous studies have hinted at the wake’s existence, but the all-sky map confirms its presence and offers a detailed view of its shape and size.

The disturbance in the halo also provides astronomers with an opportunity to study something they can’t observe directly: dark matter.

Though dark matter doesn’t emit, reflect, or absorb light, its gravitational influence has been observed across the universe. It creates a scaffolding on which galaxies are built, and without it, galaxies would fly apart as they spin. Dark matter is estimated to be five times more common in the universe than all that is visible, including stars, planets, and gas clouds.

As the Large Magellanic Cloud, or LMC, sails through this region, it should leave a wake behind. The stars seen trailing the LMC in the new star map are thought to be the outline of this dark matter wake, with the stars “floating” on it like flotsam on an invisible ocean.

“We think this wake is made up of dark matter, and it drags stars along with it, which is how we can detect it,” says Nicolás Garavito-Camargo, a doctoral student who is part of a research group led by Gurtina Besla, an associate professor of astronomy at the University of Arizona’s Steward Observatory. Both are coauthors of the new paper.

Garavito-Camargo adds that “the Milky Way is the only galaxy in which we can resolve the stars and the halo to this level of detail, so it is our most important ‘natural laboratory’ in which we can study how galaxies work in general. We think that what we observe here likely applies to similar galaxies throughout the universe.”

“The wake in our map is a really neat confirmation that our basic picture for how galaxies merge is on point.”

The paper’s lead author, Harvard University professor Charlie Conroy, and his colleagues were inspired to hunt for LMC’s wake after learning about work done by Garavito-Camargo and Besla, whose research group specializes in computer models that predict what dark matter in the galactic halo should look like.

Their model accurately predicted the general structure and specific location of the star wake revealed in the new map. It also revealed that the LMC is likely on its first orbit around the Milky Way; if the smaller galaxy had already made multiple orbits, the shape and location of the wake would be very different from what is observed.

“What has been a purely theoretical prediction has now been validated by observational data, providing a compelling argument for the existence of dark matter,” Besla says.

“Confirming our theoretical prediction with observational data tells us that our understanding of the interaction between these two galaxies, including the dark matter, is on the right track,” adds Garavito-Camargo, who led the work on the model included in the paper.

The LMC can be spotted with the naked eye, as long as the observer happens to be in the southern hemisphere. The interaction between the dark matter and the LMC has big implications for our galaxy. As the LMC orbits the Milky Way, the dark matter’s gravity drags on the smaller galaxy and slows it down.

This will cause the LMC’s orbit to get smaller and smaller, astronomers say, until the galaxy finally collides with the Milky Way in about 2 billion years. Though it might sound like a destructive event, astronomers believe that a similar process is responsible for the growth of the Milky Way and other large galaxies across the universe; in fact, our galaxy is thought to have merged with another small galaxy about 8 billion years ago.

“This robbing of a smaller galaxy’s energy is not only why the LMC is merging with the Milky Way but also why all galaxy mergers happen,” says coauthor Rohan Naidu, a graduate student at Harvard University. “The wake in our map is a really neat confirmation that our basic picture for how galaxies merge is on point.”

As the LMC and the other Magellanic Clouds enter the shores and part the “waters” around the Milky Way, they drag with them not only other small satellite galaxies but streams of stars as well. To astrophysicists trying to understand the nature of dark matter, the movements of our galaxy and its satellites hold telltale clues, serving as important beacons in the dark matter “ocean.”

Various theories exist about the nature of dark matter, and each predicts different properties for the halo of the Milky Way. For this study, Besla, Garavito-Camargo, and colleagues used a dark matter theory known as cold dark matter, which is currently favored by astrophysicists. The location and appearance of the LMC’s wake may be different if they used another model for dark matter, according to Besla and Garavito-Camargo.

“You can imagine that the wake behind a boat will be different if the boat is sailing through water or through honey,” Conroy says. “In this case, the properties of the wake are determined by which dark matter theory we apply.”

Besla’s team is running similar tests with different dark matter theories, to see which one best matches the wake observed in the stars.

The simulations were created using the University of Arizona’s High Performance Computing Facilities, specifically the El Gato supercomputer. Work that builds and expands on the simulations is already underway on Puma, the newest high performance computing cluster at the university, which will have 10 times more processing power than El Gato

Besla explains that the models used by the scientific community to describe the distribution of dark matter in the Milky Way generally presume the distribution is symmetric and static in time, which turns out to not be the case.

“The problem is, we can’t look into the past nor the future; we’re looking at all of these objects right now,” Besla says. “But we want to rewind the clock and see where everything came from.”

The researchers’ findings show that unless the calculations used to model the movements of the Milky Way’s satellites over time account for the effect of the wake created by the LMC, they will be incorrect.

“About 30% of Milky Way-type galaxies have one or more of these massive companions similar to the LMC,” Garavito-Camargo says. “We think that anytime a massive satellite goes by, the same kind of wake distortion should happen. In other words, you’d be modeling the distribution of dark matter incorrectly in 30% of galaxies, and you will infer the wrong conclusions about cold dark matter. Our model is the first step towards solving this problem for the Milky Way, as it provides a tool to assess how big that error would be.”

Dennis Zaritsky, deputy director of Steward Observatory, also is a co-author of the Nature publication. The study used data from NASA and European Space Agency telescopes, specifically the Gaia mission. NASA funded the theoretical part of the research, and the National Science Foundation funded the simulations.