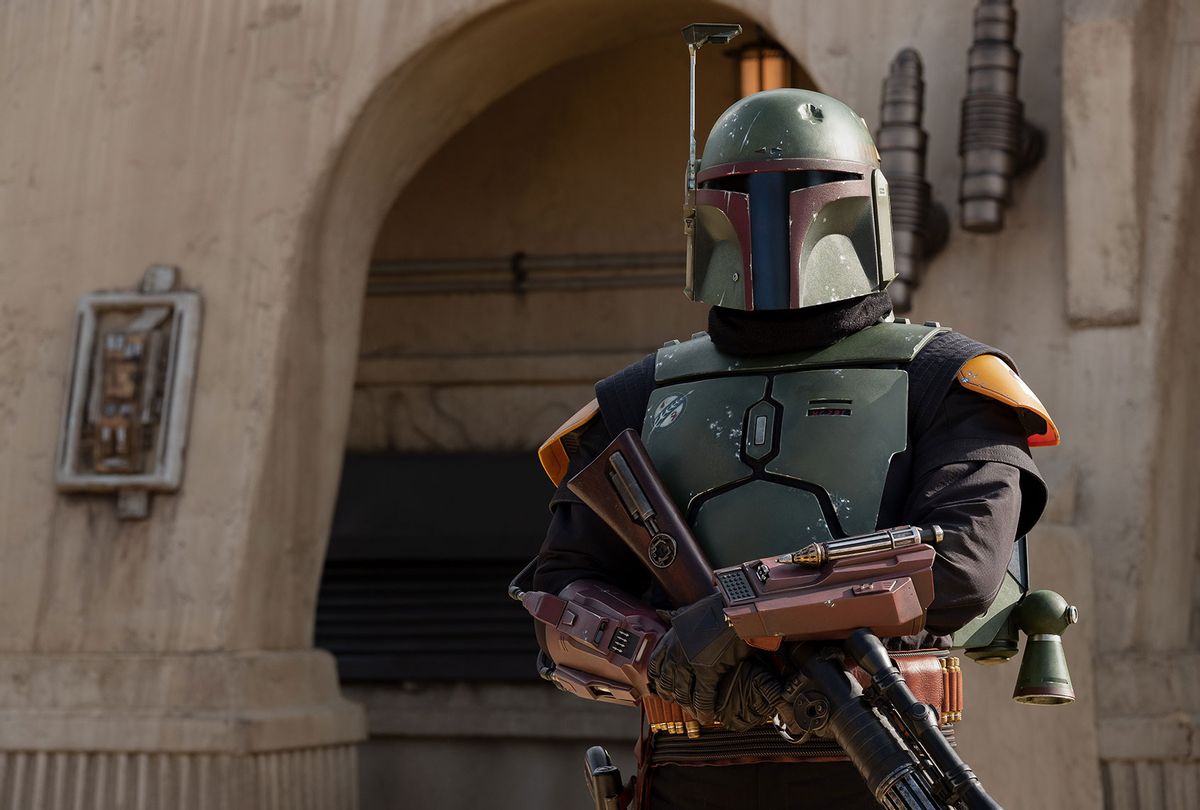 A relative silence engulfs “The Book of Boba Fett.” Not the kind of that suddenly follows a million voices crying out, which would imply that it did something worth investigating. No, this is the silence one finds inside a dead mine’s depths, the result of relatively few people digging the latest “Star Wars” TV excursion.

What is being discussed about the bounty hunter’s TV vehicle isn’t good.

Forbes agrees: “‘The Book Of Boba Fett’ Is Failing In Almost Every Way.”

They’re not wrong. Next to “The Mandalorian,” “The Book of Boba Fett” feels lifeless, saddled with a two-pronged storyline more sluggish than a drunken Bantha. As some have pointed out in its defense, it doesn’t have the benefit of an adorable Baby Yoda to distract us from its flaws. The counterpoint is it has something much better that The Child. Two things, actually.

First, it’s fronted by one of the most popular characters in the “Star Wars” franchise, played by Temuera Morrison in a continuation (of sorts) of his part in “Star Wars: Episode II – Attack of the Clones.” In that film he is Jango Fett, Boba’s father; Boba is his clone.

Second, he’s flanked by master assassin Fennec Shand, played by popular actor Ming-Na Wen. Wen came to the “Star Wars” universe by way of “Marvel’s Agents of S.H.I.E.L.D.” where she portrayed the ferocious Agent Melinda May.

Despite having these heat-seeking missiles in its arsenal the story is sputtering out, a victim of creator Jon Favreau’s timidity in expanding the legend of a character mainly propped up by his reputation.

Here’s another theory, though: Maybe part of the problem is us.

RELATED: How Star Wars failed Ahsoka Tano on “The Mandalorian”

Most of whatever you think you know about Boba Fett is assumption. Whatever ferocity we assign to his personality, whatever expertise we grant to him, is mainly a product of our imaginations. That makes Boba Fett one of popular culture’s most fascinating personas, if not the greatest trick George Lucas pulled on the movie-going public.

An auxiliary figure with four lines of dialogue, and six minutes and 32 seconds of total screen time across the original trilogy, Boba Fett somehow became the most notorious bounty hunter in that galaxy far, far away. The guy who the swashbuckling Han Solo truly fears.

And yet, only twice during his screen time does Boba Fett get shots off from his very impressive rifle, and he misses both times. (Technically he also emits two wimpy sparks from his wrist launcher before Han accidentally knocks him into that famous sarlacc pit.) But that’s it. Otherwise, he’s all confident stances and slow, wordless nods.

In truth, he’s the product of excellent design and budgetary restraints. Once you realize that, you may start to question a lot of your thoughts about him. The documentary episode “Under the Helmet: The Legacy of Boba Fett” explains that his signature suit was a proposed design intended for 100 upgraded storm troopers that would have made their debut in “Star Wars: Episode V – The Empire Strikes Back.” But its functionality was so intricate that Lucas decided to spend the money elsewhere.

So the prototype for an army uniform became one bounty hunter with a Teutonic knight-inspired helmet and a cape modeled off of an old bath towel. Ergo, nearly everything we believe about Boba Fett is entirely based aesthetic. Darth Vader did more for his reputation by wagging his finger in his face and intoning “No disintegrations!” than any other scene in “Empire” or “The Return of the Jedi.”  That is a man, we’re led to assume, that you shouldn’t cross.

But the Boba Fett in this “Book” is not that guy.

“The Book of Boba Fett” unspools in two timelines, one in a flashback to shortly after he escaped death by digestion and lived among the Tuskens, and the other in the series’ present, where he and Fennec Shand usurp Jabba the Hutt’s Tatooine holdings by killing his majordomo Bib Fortuna. Soon afterward Boba Fett finds out his reputation isn’t enough to make the underworld automatically fall in line. Even the mayor openly disses him.

If “The Mandalorian” obliquely operates as a study of faith versus morality, “Book of Boba Fett” seeks, less effectively, to tell a story about earning respect. Ah, but this is a family-friendly series, which means, no sending messages through blood violence. No disintegrations!

As if this Boba Fett would.

Morrison’s ex-hunter doesn’t exactly have a heart of gold, but as a crime lord his tendency to favor fairness over ruthlessness keeps reminding us that there’s no way to successfully replicate “The Sopranos” as an all-ages affair.

The time our man spent in the sarlacc’s belly tenderized him in more ways that physical – and longtime fans hate that. When a gang of “mods” are reported to be terrorizing one section of his territory, and he discovers they’re nothing more than out-of-work scooter kids, Boba hires them as his muscle. To repeat: Scooter kids are protecting Boba Effing Fett.

When a homicidal Wookiee and ex-gladiator breaks into his palace to murder him, this ruthless crime lord captures him alive and eventually sets him free . . . only to hire him as his muscle. Even Boba Fett’s top muscle Fennec Shand is more effective and interesting than he is.

But the character’s shift from presumed villain into anti-hero isn’t the real problem. It’s his complete lack of guile.

Favreau writes Boba Fett as a figure whose reputation precedes him, and yet in recent episodes he’s been defeated by Tatooine’s equivalent of a Roomba and a plucky office administrator whose secret weapon is making people wait for an appointment that never comes. Han Solo couldn’t outrun Boba Fett in his day, but in retirement a secretary outwits him by excusing themselves and locking a door.

Again, this is a case of expecting a character to be better than that based on zero visual proof, a bit akin to seeing Harry Styles in a toreador outfit and claiming shock and dismay that he’s unable to defend himself against a crazed bull.

It isn’t entirely our fault for building an outsized mythology around dope threads, a sick lid and a tricked-out backpack. Favreau was tasked to create a story commensurate to that hype, and couldn’t quite spin a new fable that that lives up to the longstanding legend. Few could.

Besides, other aspects of the plot are simply terrible. Boba Fett’s main motivation for founding a crime family (we think?) is to gain payback for the Tusken tribes whose land was stolen and colonized by industrial gangsters from other worlds. This is a noble grey hat quest as such things go.

But it’s also one steeped in guilt and stupidity. His new Tusken family was wiped out after he stole a fleet of speed bikes from a group of thugs in order to drive off another more powerful crime syndicate that was casually murdering Tuskens in drive-by shootings. Of course, the thugs from whom he stole the bikes weren’t happy about the theft, and killed the tribe  –  which, again, didn’t ask for any of this –  as payback. (There’s an entirely separate critique to be made here about how this plays into sci-fi and fantasy habits of styling the cultural appropriation of indigenous peoples as some kind of virtuous power up, but let’s stay on target.)

All that is entirely avoidable and out of character for a man renowned for being one of the top dogs in a field that requires very basic strategizing skills like, I don’t know, tying off loose ends.

It is to Morrison’s credit, thanks to his work in “The Mandalorian” and “Book of Boba Fett,” that we know the man can mix it up in hand-to-hand combat. But that bring us to another aspect of the show that’s killing it, which is that we see and hear far too much of the man under the helmet.

Showing Morrison’s face dispels the decades-held, IP-protected mystery of Boba Fett. (Again: behold the power of assumption.) Time and again, “Book of Boba Fett” reminds us how mortal he is by showing him getting beaten up before recovering in a healing tank, which is a little like lingering on shots of Batman applying Ben-Gay to his aches and pains after a face-off.

This was less of a problem on “The Mandalorian” with Pedro Pascal, who unmasked once in the first season and seemed ready to rely less on hiding his face by the end of the second’s finale.

The entirety of that show is dedicated to building the profile of who his character Din Djarin is, first in relationship to Grogu (aka The Child) and then to others with whom he crosses paths, including fellow Mandalorians. If Pascal shows more of his face in the third season and the audience sticks with the show, which it probably will, that’s the product of two seasons of steadily laying down the narrative train tracks to get us there.

Favreau never has that option with “The Book of Boba Fett,” who lands in his lap saddled with decades of legacy. That makes the challenge of writing these new chapters dual: the writer is expected to expand upon a screen version of a mythology that’s almost entirely atmospheric and live up to whatever version of it that’s become rootbound in our collective imagination. No wonder he’s fallen short.

In the episode that recounts how Boba Fett met Fennec Shand, he enlists her assistance in part by admitting his reputation is mainly cosmetic. “Without my armor,” he tells her, “I’m less persuasive.”

We can see that.

New episodes of “The Book of Boba Fett” debut Wednesdays on Disney+.