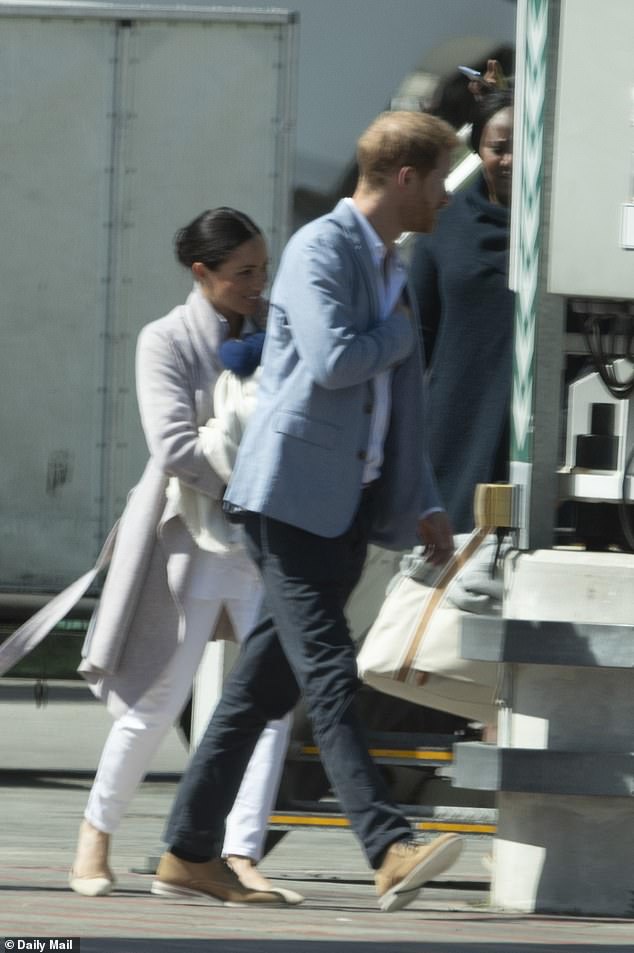 Meghan Markle has revealed details about her son’s nanny for the first time in the first episode of her long-awaited Spotify podcast Archetypes.

During a conversation with her close friend, tennis great Serena Williams, the Duchess of Sussex, 41, recalled how Archie, now three, narrowly escaped a fire in his bedroom on the Sussexes’ royal tour to South Africa in autumn 2019.

In the episode, released on Tuesday, Meghan spoke of her distress after learning of the near-miss soon after delivering an empowering speech to girls in the Nyanga township in Cape Town, before rushing back to see Archie and then having to leave him to carry out another official engagement.

She praised Archie’s then nanny, named only as Lauren – a Zimbabwean who liked to tie him on her back with a mud cloth – as ‘amazing’ when recalling the incident.

Meghan added that Lauren stayed with the family until they left for Canada – before the Duchess and Prince Harry moved to the US after stepping back from their roles in the royal family.

It comes after Harry and Meghan were ‘forced to let go’ of one of Archie’s night nurses during her second shift with the couple ‘for being unprofessional’, their biography Finding Freedom claimed in 2020.

Harry and Meghan pictured with what is thought to be Archie’s nanny in South Africa, named only as Lauren

Meghan and Harry with Archie in Cape Town in September 25, 2019. Meghan Markle has revealed details about her son’s nanny for the first time in the first episode of her long-awaited Spotify podcast Archetypes

Speaking on her podcast, the Duchess said: ‘There was this moment where I’m standing on a tree stump and I’m giving this speech to women and girls, and we finish the engagement, we get in the car and they say there’s been a fire at the residence. What? There’s been a fire in the baby’s room.’

‘…We get back, our amazing nanny, Lauren, who we’d had all the way until, um. In Canada here. Lauren in floods of tears. She was supposed to put Archie down for his nap and she just said, “You know what? Let me just go get a snack downstairs.”

And she was from Zimbabwe and we loved that she would always tie him on her, her back with a mud cloth, and her instinct was like, “Let me just bring him with me before I put him down”. In that amount of time that she went downstairs… the heater in the nursery caught on fire.

Meghan added: ‘Everyone’s in tears, everyone’s shaken. And what do we have to do? Go out and do another official engagement. I said, “This doesn’t make any sense”.’

The Sussexes had dropped their young son off at the housing unit they were staying in for a sleep straight after flying in for their official tour in 2019, with the couple then leaving to kick start their royal visit with their first engagement.

Meghan recalled: ‘There was no smoke detector. Someone happened to just smell smoke down the hallway, went in, fire extinguished. He was supposed to be sleeping in there.’

The duchess described how she wanted to tell people what had happened.

‘I was like, Can you just tell people what happened? And so much, I think, optically, the focus ends up being on how it looks instead of how it feels,’ she said.

She stressed the need for more understanding of the ‘human moments behind the scenes’.

The duchess added: ‘We had to leave our baby… and even though we were being moved into another place afterwards, we still had to leave him and go do another official engagement.’

Williams replied: ‘I couldn’t have done that.’

Later the same day, the couple had visited Cape Town’s historic District Six neighbourhood, met residents in its Homecoming Centre and heard from people who were forcibly removed to a township during the Apartheid era, with the Sussexes also carrying out an impromptu walkabout.

Fans went wild over a rare sighting of Harry and Meghan’s nanny during their tour of South Africa, when they arrived at Cape Town airport together.

Meghan was pictured carrying a then four-month-old Archie as she disembarked the plane with Harry and eagle-eyed royal enthusiasts were quick to point out that their nanny could be seen in the background of one of the shots.

Dressed in a black wrap cardigan she could be seen climbing down the stairs of the plane, as she followed the smiling couple to their car.

This was only the second time their nanny had been seen, after she was first spotted accompanying Harry and Meghan to Sir Elton John’s home in the south of France a month earlier, also dressed in an inconspicuous black outfit.

The nanny reportedly did not live at Windsor Castle’s Frogmore Cottage with the Sussexes at the time, but was always said to be accompanying them on the royal tour.

Yet while they appeared to find a good match with Lauren, their biography Finding Freedom, released in 2020 and co-authored by journalists Omid Scobie and Carolyn Durand, claimed Harry and Meghan were ‘forced to let go’ of one of Archie’s night nurses during her second shift with the couple ‘for being unprofessional’

Meghan makes a speech as she visits a Justice Desk initiative in Nyanga township, with Prince Harry during their royal tour of South Africa on September 23, 2019. Just minutes later, she was told that her son’s bedroom was on fire

The book claimed the couple wanted to hire a night nurse to establish a sleep schedule and be an extra pair of helping hands’ after the birth of their son Archie.

However, the nanny’s time with the family was ‘brief’, with the authors writing: ‘Meghan and Harry felt they were forced to let the nurse go in the middle of her second night of work for being unprofessional.’

According to the book, Prince Harry and Meghan had originally decided to ‘forgo’ a full time nanny however decided to work with a night nurse after Meghan’s mother, Doria Ragland, flew back to Los Angeles.

The book goes on to say the couple felt the nurse’s behaviour was ‘unprofessional’, but does not explain the details of what happened.

Prince William and Kate Middleton have a Norland nanny, Nanny Maria, who has been seen in the traditional brown uniform (pictured at Princess Charlotte’s christening in 2015)

And, after their experience with the first nanny, the couple were wary, with the authors writing: ‘The new parents went on to hire a second night nurse, who did a fine job, but because of the incident with the first nurse, neither found themselves comfortable sleeping through the night without going to check on Archie regularly.

‘After a few weeks, they decided to take on nights themselves and went without a night nurse entirely.’

Instead the couple ‘hired a nanny to work weekdays’, joining other members of staff in the household.

The book also detailed how the couple had decided not to have any live-in staff, with the authors writing: ‘Harry and Meghan had agreed they didn’t want heir home filled with staff.’

They go on to write that ‘Harry had seen that situation at Prince William’s home (the Cambridge’s had a live-in housekeeper and a full-time, live-in nanny) and didn’t want the same for his own family.

‘He and Meghan liked the idea that when they went to bed at night, it was just the three of them in the house. Cosy and private.’

The Duke and Duchess of Cambridge employ a Norland nanny called Maria who is often seen in a traditional uniform looking after Prince George, Princess Charlotte and Prince Louis.

A source previously told The Sun that the third nanny hired ‘fitted into the family really well’, adding: ‘Meghan is a very hands-on mum but the new nanny is a godsend.

‘She’s great with little Archie and just adores him. Harry and Meghan are very happy with her.’

At the time, Katie Nicholl, who has written a series of biographies on the royal family, claimed that hands-on parents Prince Harry and Meghan asked the royal childminder to sign an ‘extensive’ non-disclosure agreement.

Katie told Entertainment Online: ‘I’ve heard from very reliable sources that the new nanny who has been appointed by the Sussexes has had to sign quite an extensive non-disclosure agreement.’

Elsewhere in the first episode of her podcast, which discussed the double standards women face when they are labelled ‘ambitious’, Meghan said: ‘I don’t remember ever personally feeling the negative connotation behind the word ambitious until I started dating my now husband.’

Williams also revealed how Harry helped her with her decision to retire from tennis long before it was announced, spending around an hour discussing the issue with her.

‘He was trying to knock some sense into me,’ Williams said.

Meghan, who stepped away from the monarchy with the Queen’s grandson for a new life in California, said to Williams: ‘I think, you know, I think both of us, or the three of us, really know that sometimes the right decision isn’t the easiest decision.’