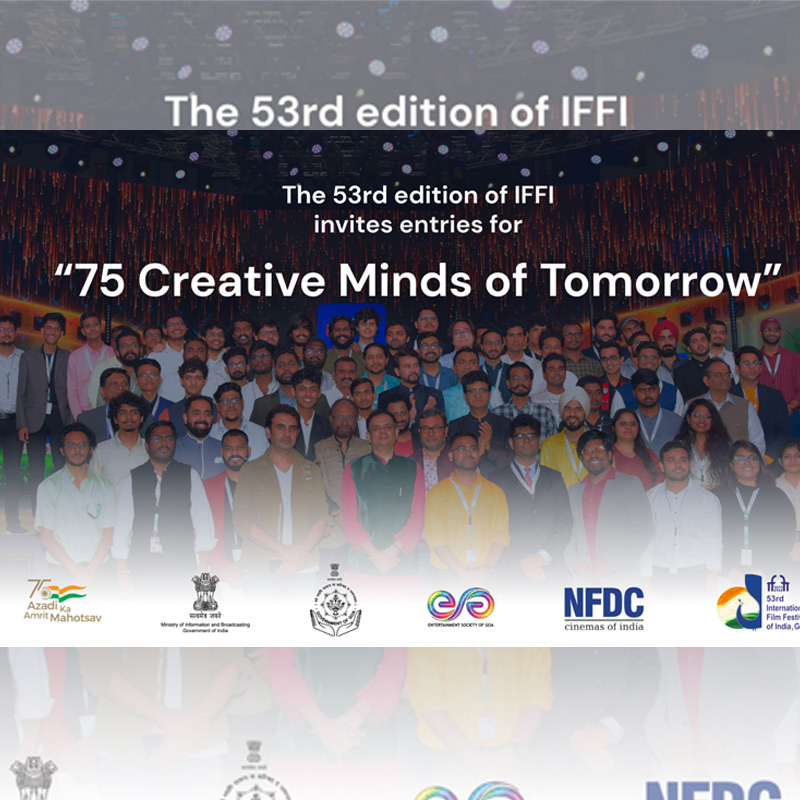 Mumbai: The ministry of information and broadcasting (MIB) has opened applications for the ’75 Creative Minds of Tomorrow’ competition. The segment is an annual platform at the International Film Festival of India in Goa for identifying, encouraging, and nurturing young creative talents from various aspects of filmmaking.

The initiative is in its second year, having begun in 2021 to commemorate India’s 75th anniversary of independence as part of the ‘Azadi Ka Amrit Mahotsav’ celebrations.

The number of filmmakers recognised represents the years of Indian independence. It is expected that the number of youths participating in ‘creative minds’ will increase by one in the coming years in order to keep the spirit of the endeavour alive.

An eminent jury will shortlist and select the 75 creative minds under the auspices of the National Film Development Corporation ahead of the 53rd edition of the International Film Festival of India.

This programme identifies young budding film makers and provides them a platform to interact and learn from national as well as international film makers during the period of IFFI Goa.

This is a one-of-a-kind platform, with the largest gathering of young creative minds chosen through a competition at any premier film festival around the world. It was conceived in 2021 by union minister for information and broadcasting, youth affairs, and sports Anurag Singh Thakur to provide a platform and connect young talent with industry masters from the media and entertainment sectors.

The selected ’75 Creative Minds of Tomorrow’ will also attend workshops and sessions specially curated by the masters of cinema during the festival event in Goa. Furthermore, each team will take part in a group competition to make a short film in 53 hours. The themes of the short film will be inspired by the spirit of Azadi Ka Amrit Mahotsav, in which the teams will present their vision of [email protected]

The selected creative minds will be divided into seven teams in collaboration with Shorts TV, the initiative’s programming partner. The films created by the seven teams will be screened theatrically at IFFI on 24 November followed by an award ceremony to recognise the winning film. Everyone who takes part in the competition challenge will be recognised.

The initiative is also another step toward making India a global content and post-production hub by identifying, nurturing, and up-skilling young talent and preparing them for industry connections and readiness. The initiative is nurturing and developing an ecosystem of young filmmakers, allowing them to network and collaborate from the start.

The ministry intends to implement productive interventions so that participants can take advantage of this opportunity for gainful employment in the media and entertainment sectors.

The entries will be accepted from 5 September 2022 till 23 September at: https://www.iffigoa.org/creativeminds.