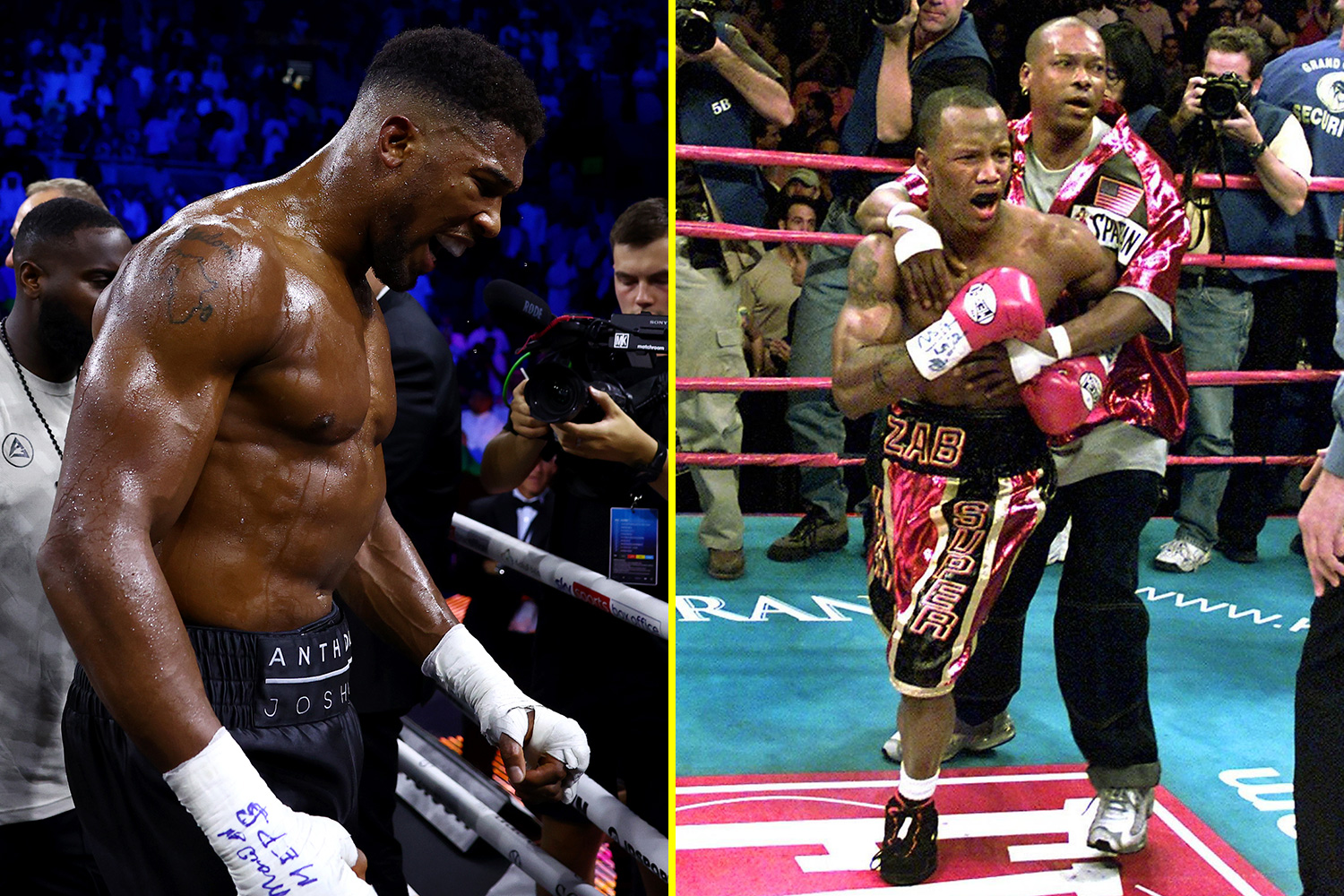 Anthony Joshua’s bizarre in-ring speech after his defeat by Oleksandr Usyk is an event the big Brit clearly regrets – but don’t worry AJ: from boxers trying to sucker-punch their own trainers to whacking referees, there’s been far worse post-fight meltdowns in the ring.

Mike Tyson, Floyd Mayweather, Zab Judah and various other top-level boxers have had outrageous in-ring reactions. And most of them didn’t even have the class to offer a ‘hip-hip-hooray!’ to their opponent. For shame.

Tyson’s most famous meltdown may have been mid-fight, when he played Jaws to Evander Holyfield’s ear, but three years later he went on a spectacular post-bout rant. One made even more extraordinary because it came after a fight he had won in only 38 seconds.

‘Iron Mike’ rapidly blitzed Lou Savarese in Glasgow in 2000 but after the fight was stopped, Tyson simply kept on swinging haymakers, briefly felling UK referee John Coyle with a cuffing shot. Coyle, displaying a better chin than Savarese, quickly got up and mercifully did not disqualify the fired-up Tyson. But ‘The Baddest Man on the Planet’ wasn’t done yet.

Asked on TV about his heavyweight rival Lennox Lewis, Tyson responded with his most infamous tirade. First he compared himself to Sonny Liston and Jack Dempsey (fine), then Alexander the Great (a bit odd), then he finished with the full-on bonkers: “My style is impetuous, my defence is impregnable, and I’m just ferocious. I want his heart! I want to eat his children!”

Quite what the then child-less Lewis made of that is anyone’s guess. But at least he didn’t have to face Tyson’s wrath in person that night, something Kostya Tszyu had to handle after he stopped Tyson’s pal Judah in two rounds to unify the light-welterweight titles a year later.

Judah crashed to the canvas twice after a dynamite Tszyu right hand, failing to stand upright after his first attempt to get up and prompting referee Jay Nady to wave it off. Nady was rewarded by an enraged Judah sticking his glove in his throat before the bad-tempered Brooklinite picked up a ring stool and threw it across the crowded ring, while his training team and Las Vegas police officers desperately tried to calm him down.

The end result of the chaos was a $75,000 fine and a six-month Nevada suspension for Zab. Which was at least better than the assault conviction and four months in jail that greeted James Butler after one of the most despicable acts ever seen in a boxing ring.

After a bright opening round for Judah, Tszyu landed a huge right hand to put him down and as he struggled to regain his legs the referee waved it off pic.twitter.com/DY3qiFv45Y

A world title challenger at 168lb, Butler suffered a mild upset defeat when he was outslicked by Jamaica’s showboating Richard Grant in 2001. A frustrated Butler seemed to accept the result at first, before landing a sickening sucker-punch. With no warning and without his gloves on, ‘The Harlem Hammer’ landed a vicious right hand on Grant’s unprotected jaw.

The bleach-blond Grant collapsed to the canvas, lost several teeth and had to be treated for several facial injuries including a broken jaw. Butler deservedly went to prison but even this was not even the lowest act of this nasty piece of work. Three years later, after he’d returned to the ring, Butler murdered Sam Kellerman (brother of US sports analyst Max Kellerman) and was sentenced to 29 years behind bars.

Nothing can top Butler’s horrific crimes, but when it comes to outright crazy, Levan Shonia shines alone. The little-known Georgian middleweight had a jaw-dropping reaction to his defeat to Spas Genov in Bulgaria in 2018.

Shonia firstly wanted to continue fighting Genov after the decision was announced but he quickly found a new target for his rage: his trainer. Despite his coach’s efforts to calm him down, Shonia threw a full-blooded right hand in the ring, which his coach – boasting the body of a tubby middle-aged man, but clearly the reflexes of a prime Mayweather – slipped with his hands down.

One of the most disgraceful act in boxing. James Butler sucker punching Richard Grant in November 2001 in a charity event for for the NY fire department & NYPD after 9/11 attacks.

In 2004 Butler was charged with the murder of Sam Kellerman brother of boxing analyst Max Kellerman pic.twitter.com/Ubgo79gKW5

The trainer exited the ring but the two continued to argue over the top rope, prompting Shonia to attempt another punch and his coach to lean into the ring and respond with a slap.

What made this all the more strange was that Shonia had a record of 15-12 going into the bout and was just there as journeyman fodder to the unbeaten Genov. He can’t have been expecting to win. Oddly, it was actually Genov who never fought again after this bout – leaving the sport with a record of 12-0 after perhaps deciding that boxing was just too crazy for him.

Floyd Mayweather, with his enormous but fragile ego, knows plenty about bratty post-fight reactions – all the more incredible as he never suffered a defeat in his 50-fight pro career. But ‘Money’ could kick up a fuss even after a win.

His controversial KO of Victor Ortiz involved Ortiz blatantly headbutting him, then apologising, at which point Mayweather – understandably, in talkSPORT’s humble view – just punched him twice in the face and knocked him out. Nothing against the rules but Mayweather was naturally given a grilling about it post-fight by veteran HBO analyst Larry Merchant. At which point the boxer petulantly lost his rag.

“You never give me a fair shake,” snarled Mayweather. “HBO need to fire you! You don’t know st about boxing – you ain’t st.” To which Merchant responded with possibly the least true words ever uttered in a boxing ring: “I wish I was 50 years younger and I’d kick your ass.”

While even a 30-year-old Larry was almost certainly not going to school one of the greatest pound-for-pound fighters of all time, it was pretty undignified to see Mayweather ranting and swearing in the face of a respected analyst who had blown out the candles on his 80th birthday cake earlier that year.

So while Joshua’s throwing two of Usyk’s heavyweight world title belts out of the ring then going on an ill-timed monologue (which did at least include plenty of sporting praise for the Ukrainian) was less than ideal, boxing history shows us it could have been a lot worse.

Imagine if AJ’s post-defeat reaction was to attack the referee, row with a TV analyst, try to sucker-punch Usyk, throw his stool across the ring, attempt to tombstone piledrive his trainer Robert Garcia on to the canvas, then threaten to eat all six of Tyson Fury’s children.

That would have been the post-fight reaction to top them all. As it is, Joshua can rest easy knowing that his tirade had a more ‘embarrassing uncle at a wedding’ energy than the ‘we must ban this man from a boxing ring for the foreseeable future’ low point. Chin up, big Josh.