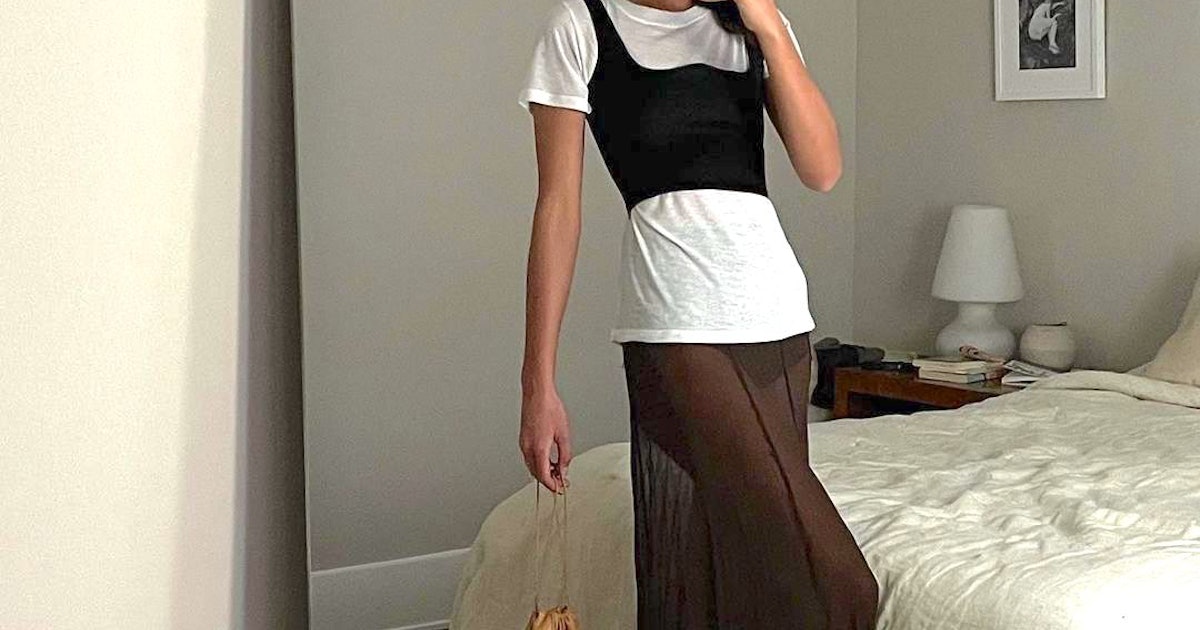 Stylist Ale Kertze has always had a minimalist aesthetic — wearing a collection of classics that remain true to a neutral color palette — but the last two years pushed her towards a super-pared-back shift, what she describes as “extreme minimalism.” The shift in her modern minimalist fashion choices was a result of adopting a nomadic lifestyle of sorts, first moving to Tel Aviv, and then eventually bouncing around to cities like New York City and São Paulo, hopping on flights to visit her clients, all of whom are scattered all across the globe.

What was first supposed to be a four month-long stay in Tel Aviv stretched into a year, and all she had was one suitcase that consisted of seven tops, five bottoms, three jackets, and one dress. She had packed her favorites (essentials she could wear over and over again, and mix and match to yield infinite outfit permutations), and was surprised to discover that she was perfectly content with her shrunken-down, travel-size capsule closet. It made getting dressed easier in the morning, and — here’s the kicker — she found she didn’t even really need the rest of her wardrobe that sat in storage in New York.

“For me, the concept of minimalism is about having less items — but [they’re] items you really, truly love,” says Kertzer, adding that many of her clients (about 70%) are now demanding a more minimalist approach to dressing, which was less common before the world shut down. “People then were so much more into buying volume. Now, clients are coming to me and they want a capsule closet. They’ve had a lot to think about: All the money they’ve spent and what they’ve spent it on … people want to be more conscious. We all want to get dressed and look good, but we don’t need to buy that much stuff to look good and be happy.”

Of course, the concept of capsule dressing is by no means a novel one — it’s been touted by fashion editors for decades (not to mention brands of past and present that have based their entire ethos on outfitting women with only the pieces that matter). And while capsule dressing is simple in theory — a tightly edited, highly curated, carefully selected closet of essentials — it’s much, much harder to put into practice.

For Neada Deters, founder of skin-care brand Lesse and a true minimalist (see: her Instagram), the capsule mindset plays a huge part in the way she approaches fashion: an incredibly refined wardrobe that serves as an exercise in restraint and precision with a trained focus on strong tailoring, masculine silhouettes, and beautiful fabrication, like silks, poplin cottons, and sheer organza.

“It’s surprising to a lot of people who come to my house and see my closet; they say, ‘I can’t believe you don’t have more clothes,’” says Deters, who describes her style as enduring with strong minimalism influences from the early ‘80s (Gianfranco Ferre and Escada) and early ‘90s (Calvin Klein, Helmut Lang, Prada), with a streamlined closet that’s largely confined to a palette of white, brown, beige, and black. “I like to simplify the process of getting dressed, and that doesn’t mean it’s not expressive because you’re finding new ways to interpret the same pieces; it means you’re very clear on what you feel good in and the silhouettes that reflect what you want to present to the world. I really love an edit of pieces that I wear frequently and for a long time, minimizing how much we produce and how much we need.”

But that’s not to say a minimalist and a capsule-closet loyalist are one and the same. Alexis Badiyi, a Brooklyn-based creative and stylist, believes capsule dressing plays a small role in the expanse of minimalism. For her, it’s a lifestyle that’s rooted in mindfulness, intention, and ultimately, authenticity.

“We’re constantly inundated with noise and excess, and we’ve had an overwhelming last couple of years. Minimalism clears the way for a person to take away the clutter and put forth tasteful pieces that are true to themselves,” effuses Badiyi, who believes that as a theory, minimalism should be expressed through all areas of your life, including work, friendships, food, and home. And when done with thoughtfulness, it should feel like an exhale of relief. A sense of calm. “It’s not just about having one chair, it’s about what that chair is for, and that’s when minimalism works — when it has soul and intention.”

Exercising it, she emphasizes, should feel like a choice, as opposed to fitting a simple mold. And by that she’s referring to the definition of minimalism of a decade ago, which “used to mean, more sterile and bare, a bit more surface level. And it was just about an aesthetic that was simple, but it would miss the mark and feel lifeless.”

Deter echoes that sentiment — 2016-era minimalism revolved purely around a surface-level “clean” aesthetic (sharp lines, neutral colors) and that was that. She poses a question that quite neatly sums up the difference between then versus now: “Is it a wardrobe of 300 neutral items or is it a wardrobe of 40 pieces that someone is working to create different looks and across seasons and finding ways to be expressive within those parameters?”

“The minimalism of five years ago was less tied to reducing what we need,” she continues. “Today, we’re seeing that people can still be stylish and gravitate toward color or texture or bold shapes, but don’t necessarily need to buy a new piece of clothing every single week, and I think that’s a positive progression in the industry.”

And that’s why luxury brands, like Celine, The Row, Bottega Veneta, and Hermes, continue to be heralded as the gatekeepers of the aesthetic, and by extension, the theory of minimalism — their collections, all of which are meticulously and carefully crafted with top-tier fabrics and considered silhouettes, making them both season-less and ageless. “These brands really think about how a woman wants to dress at every stage of her life, I don’t think we see that consideration across every fashion line; you can wear pieces from The Row in your 20s, 50s, and 80s,” says Deters whose mother and grandmother inculcated in her the value of timeless styles through their own impeccable taste.

As such, Deters’ closet comprises garments from minimalist brands like Celine, The Row, Lemaire, and CO (her current favorite handbag brand is Fane), supplemented by unique, one-of-a-kind vintage pieces. So, when confronted with the question of whether she thinks minimalism, which has overtaken Instagram, is considered “basic” or overdone, she pauses to think before pointing out that great tailoring, denim, and button-downs have been, for the last several decades, consistently championed as closet staples, as the building blocks of any wardrobe. “Everything is subjective, but if you’re catering to a certain look just because that aesthetic is feeding an algorithm, then yes, that’s not true expression, that’s not true style,” she says. “But if you’re gravitating toward something because that’s what you truly like and it’s what you feel good in, then no, I don’t think that’s basic. It’s about embracing what feels good to you and having no judgment around that.”

And at a time when people have emerged from spending the last two years cooped up at home, self-reflecting and gaining a deeper understanding of who they are, everything now is tinted with a layer of unapologetic honesty. “We’re seeing a reflection of that honesty in people being confident in their style — there are those who are more colorful and playful, and there are the minimalists,” Deters says. “We’ve experienced this moment of suspended expression, so now, all we want to do is express who we are.”

In this new era of self-expression, it’s possible that both maximalism (including this new super-sensual fashion wave) and minimalism can peacefully coexist. But Badiyi wants to be clear that just because minimalism is the counterpoint to maximalism doesn’t necessarily mean it’s about restriction. When you’re deliberately selecting beautifully made pieces — like works of art — minimalism, she argues, is about abundance.

“Each piece has its space, and when you’ve chosen these pieces, you can nurture it, give yourself fully to it, and enjoy it,” says Badiyi, who expresses minimalism through her outfits (one favorite look: a ruched asymmetrical Helmut Lang black dress that she styled with a pair of strappy Lemaire heels and an oversized, strong-shouldered blazer) and through the home (architecture is a huge influence, like Schindler, Neutra, and Eames). “Sometimes when I walk into a place that’s chaotic, I feel a bit short of breath. But the second I arrive at a beautiful, minimal space, I feel inspired. I can exhale.”

At the end of the day, to be a minimalist in 2021, Kertzer believes it all boils down to intention. “Just be conscious and aware of what you’re purchasing,” she says. “Your style doesn’t have to be super clean and streamlined, it’s about what you’re putting in your closet.”

In short: Buy what you love, wear it forever.