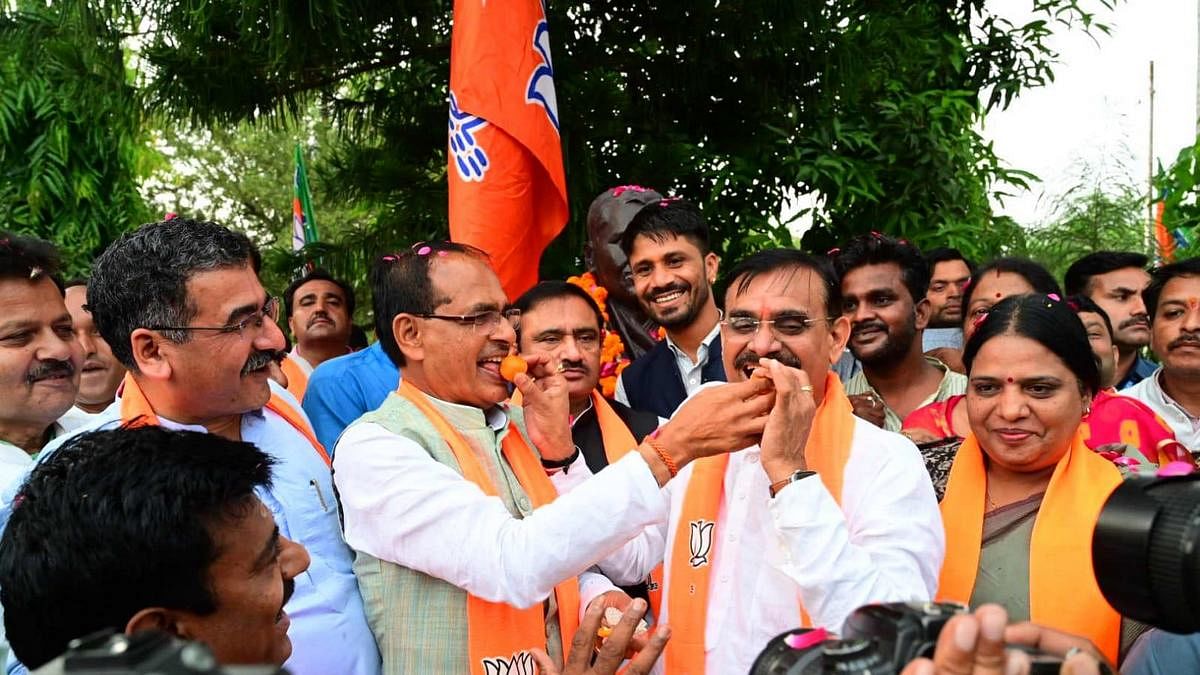 New Delhi: The Madhya Pradesh unit of the Bharatiya Janata Party (BJP) has made much of its ‘historic win’ in the local body polls that concluded last week, but the exercise has also exposed bad blood between different factions of the party, with allegations of sabotage and subterfuge keeping the gossip mills churning.

A few of the BJP’s ‘official’ nominees in the rural body elections — the last phase of the three-tier polls — have alleged that certain Union ministers and members of the Shivraj Singh Chouhan cabinet worked to engineer their defeat, and ultimately ended up helping the Congress.

In this phase of the local body election, indirect voting was conducted to decide the chairpersons of 51 district panchayats, as well as other posts. BJP-backed candidates won 41 district panchayat president posts, while eight and two went to Congress-supported and Independent contenders respectively.

The BJP candidates who lost include Jyoti Prakash Dhurve, a two-time district panchayat president from Dindori and the wife of former BJP state minister Om Prakash Dhurve. She has blamed Union minister Faggan Singh Kulaste for her defeat to a Congress-backed candidate this time. Kulaste’s aides, on the other hand, have accused Dhurve of not acting in accordance with the party.

It’s a similar story in Harda, where state minister Kamal Patel is facing some heat from cadres for the victory of the Congress’s Reva Patel. She happens to be Kamal Patel’s cousin.

Speaking to ThePrint, BJP state general secretary Bhagwandas Sabnani said that he was aware of the allegations doing the rounds. “The party is hearing the complaints of leaders who are blaming others for sabotaging their chance, but a detailed analysis will be done in the respective districts only after 15 August,” he said.

While the BJP has outperformed all other parties in the local body elections and has maintained that this bodes well for the 2023 MP assembly polls, it did not repeat the clean sweep it achieved for mayoral posts that it did in the last round in 2014. The party won nine out of 16 mayoral posts, while the Congress got five, up from none the last time, and the Aam Aadmi Party also opened its account with one post. Off the record, party leaders attributed the losses to “infighting, poor candidate selection, and overconfidence”.

On Tuesday, the BJP shifted all 34 of its councillors in the Gwalior Municipal Corporation to Delhi ahead of the 5 August voting to elect the chairperson of the civic body’s council, apparently to counteract differences between the “camps” of senior leaders.

In Dindori, the defeated BJP-backed candidate Jyoti Dhurve has reportedly complained to CM Chouhan and state party president V.D. Sharma that Union minister Faggan Singh Kulaste ensured that she did not get the votes she needed to win.

Speaking on condition of anonymity, a close associate of Dhurve alleged: “For the election to the post of district panchayat president, the BJP and the Congress each had five votes. Two members had committed to supporting her but Kulaste took one of them away to Delhi. This member was unable to vote, which is why Jyoti lost.”

However, Naresh Rajput, the BJP’s Dindori district president and a close confidant of Kulaste, blamed Dhurve for her defeat.

Speaking to ThePrint, Rajput alleged: “She did not take the organisation into confidence for the election and she campaigned alone. She even abused party workers. How can anybody win without taking along the organisation? Even her supporters were not ready to vote for her.”

Shortly before voting, a video was widely circulated locally of Dhurve purportedly threatening Rajput: “Mein Road par aakar laat marungi tho koi bachaane nahi aaega… jaakar V.D. Sharma ko bata dey (Even if I kick you on the road, no one will come to save you… go tell V.D. Sharma).”

Fraught dynamics were also at play in Damoh, where different camps reportedly backed different nominees for the post of district panchayat president.

“The Prahlad Patel faction favoured Urmila Balram Patel for the post, but the Bhargava and Govind Singh Rajput group favoured Janaki Devi, the wife of former district panchayat president Chandrabhan Singh. However, despite the support of these top leaders, Janaki (the official candidate) did not file a nomination. The Prahlad Patel faction has now asked state party president V.D. Sharma to take action against leaders who are conspiring to weaken him [Patel] in the district,” a BJP leader in MP said on condition of anonymity.

Causing quite a frisson locally, Prahlad Patel also allegedly celebrated the defeat of Rajput’s cousin, Tinku Raja, who was running for another district panchayat position. Pictures of Patel offering a mithai (sweet) to the victor, the BJP-backed Sarvjit Singh, were widely circulated on social media as a sign of the factional divide in the party.

Govind Singh Rajput is close confidant of Jyotiraditya Scindia, who switched from the Congress to the BJP in 2020. Since then, there has been a tussle for importance between the Scindia faction and that of BJP old-timers in the state.

Soon after the mayoral election results were announced, BJP national general secretary Kailash Vijayvargiya raised questions about apparent anomalies in the voters’ lists in the urban local body polls — a concern that the Congress raised as well.

In a TV interview, he said that it was “alarming” that the voters’ lists had been revised so that many people were unable to cast their vote, and that Chief Minister Shivraj Singh Chouhan should look into the matter.

Several of the seven mayoral posts that the BJP lost fall under the strongholds of senior party leaders. For instance, Gwalior, Morena, and Damoh are seen as the bastions of Union ministers Jyotiraditya Scindia, Narendra Singh Tomar, and Prahlad Patel respectively. Katni, on the other hand, is under the parliamentary constituency of state president V.D. Sharma, and Jabalpur is the home turf of former state president and MP Rakesh Singh. The BJP’s best performance was in the Malwa region, which is the CM’s stronghold.

A BJP leader pointed out: “At most places, the candidates of senior leaders ended up losing elections. For the time being, all rivals of Shivraj have lost chance to pressure the high command to change the CM. There are fewer bargaining chips for those who are mounting pressure on Shivraj to give assembly tickets to their camp leader.”