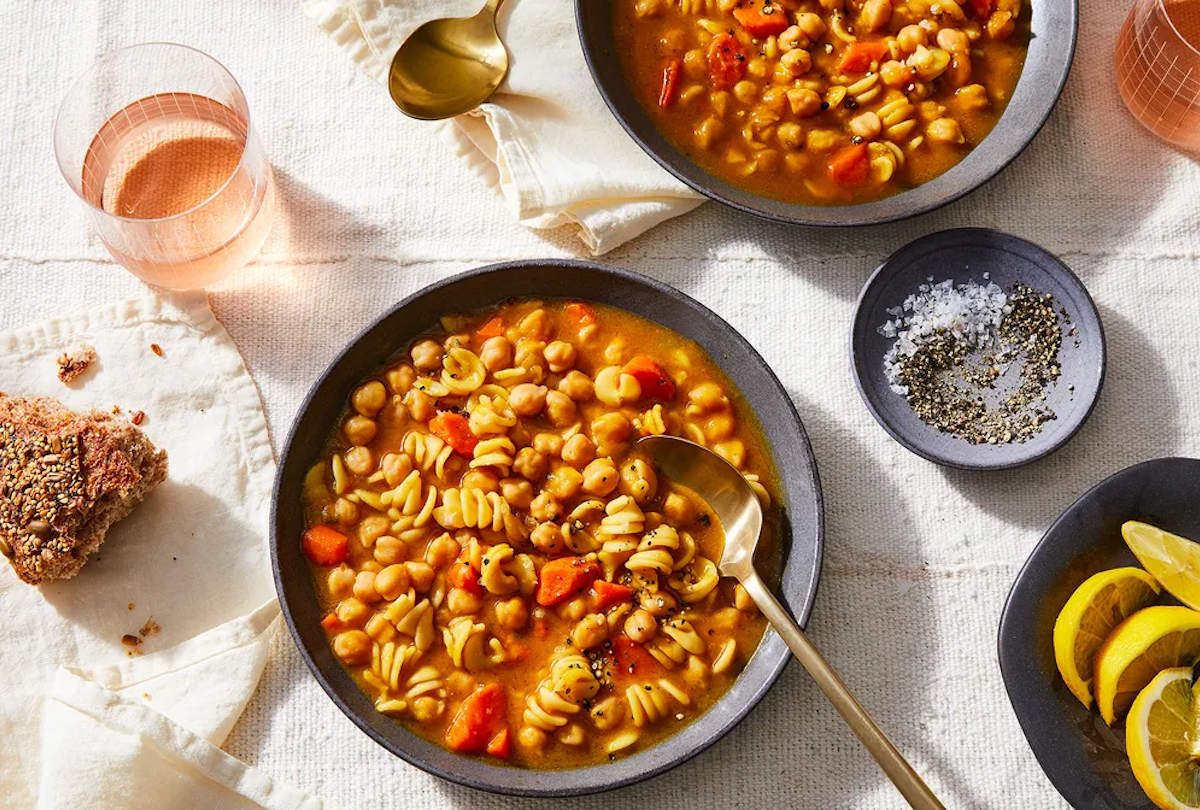 Once upon a time, I wrote a weekly column here, a project called “Twenty-Dollar, Twenty-Minute Meals.” It was a catchy idea in support of my first cookbook that inspired me to consider whole food grocery products — cans of beans, cartons of stock, jars of sauce — as shortcuts to flavor and cooking time. The column stretched my imagination of where real food can come from, like an enormous feature in a magazine I had grown accustomed to writing. Since then, my projects since have been more personal and focused on storytelling, but creativity and good home cooking remain at the center of all I do.

Now, eight years later, I am known as “Soup Lady” first and “Caroline” second among some of my friends, which is an accurate depiction of my identity, if you ask my husband. I have fallen into a life where I make an absolutely ridiculous amount of soup every week for nine months of every year — the rainy months in Seattle, referred to as “soup season” in my house, where “souping” is also a verb — for the past three years. (As you read this, I’ve just started my fourth.) I don’t want to digress too much, but suffice it to say that this soup-obsessed life found me and my ties to it are profound and emotional. I am not exaggerating when I say I believe it saved my life.

So, that I have an ancient (as far as the digital world is concerned) soup recipe floating around on this very site that is both popular and very much disliked makes the soup lady in me deeply uncomfortable. Incidentally, the recipe as I originally conceived it defies what I’ve learned from all of my years of souping. So I set out on a grand mission: to create a “redo stew” that would surpass the community’s expectations — and, more importantly, my own.

Upon examining Soup V1 with my new lens, the first thing I noticed was the broth, a dead giveaway that this recipe was written by my soup-rookie self. I categorically do not use broth in my soup anymore, despite having believed for years it was a rule that required following in order to make the result most delicious. I decided to simply try breaking this rule in order to maintain my sanity, after only once making a kiddie pool’s worth of broth only to return it to the very same pots as an ingredient in soup. Infuriated by the volume of dishwashing, I vowed that day I would never make soup in order to make soup again. (I haven’t.) What I learned in giving up broth was that there were so many more ways to build flavor in a soup, ways that effectively allowed me to have more control over the brew that resulted, ways that allowed the flavor of the vegetables to really sing. (Cue Soup Lady and control-freak Caroline high five here.)

Next, I gathered a few tricks from the arsenal I developed while writing down my soup club recipes for its cookbook: I included nutritional yeast (a funky favorite, my new “rule” in building savory vegan flavor), pulled the sage-salt method and the pinch of fresh nutmeg from my Thanksgiving soup, swapped canned beans for dried for better texture, and added lemon juice to finish. I fluently wrote the recipe for the Instant Pot, as I’d done for every stovetop recipe in my book, and finally it looked like a recipe I’d recognize among the pages of my new cookbook, Soup Club.

The soup, still speedy but now vegan, came from almost the same ingredients but I knew it was different. Because I was different. I am the Soup Lady, now, after all.