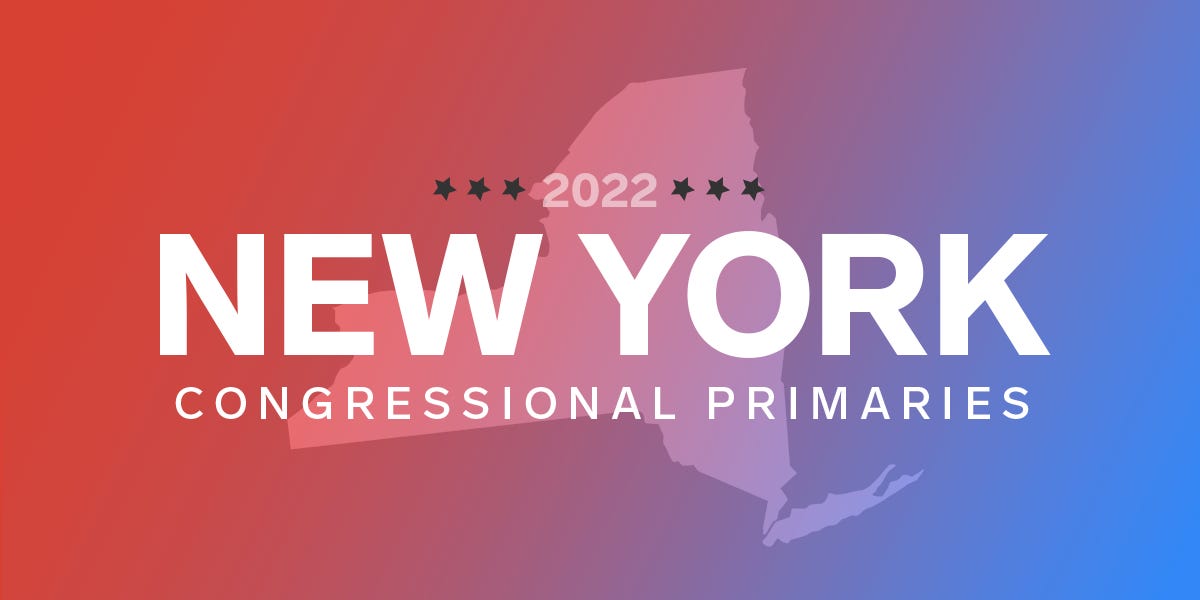 The races & the stakes

New York is holding a slew of hotly-contested congressional primaries on Tuesday, featuring messy games of political musical chairs and internal Democratic Party fights partly spurred on by the redrawing of the state’s political lines.

A protracted court battle over New York’s new maps for Congress and state legislature led to two separate primary days. The primary for state-level offices and state Assembly occurred in June, and primaries for congressional and state Senate seats are being held on August 22.

In Upper Manhattan, longtime incumbent Democratic Reps. Carolyn Maloney and Jerry Nadler are duking it out for New York’s 12th Congressional District, which unifies the Upper West and Upper East sides of Manhattan into one seat. Democrat Suraj Patel, who previously challenged Maloney in 2018 and 2020 for her former district, which included the East side of Manhattan and a part of Queens, is also running for the seat.

Downtown, over a dozen Democratic candidates are vying for the open and deep-blue 10th District, which encompasses lower Manhattan and parts of downtown Brooklyn.

In the Hudson Valley, state Sen. Alessandra Biaggi is challenging incumbent Democrat Sean Patrick Maloney in New York’s 17th District. Maloney, who leads House Democrats’ campaign arm, angered many progressives by deciding to run in the 17th District. The move pitted him against another House incumbent, Jones, who ultimately decided to move and run in New York City.

Maloney running in the 17th District opened up the new 18th District, a competitive battleground seat.

One candidate, Ulster County Executive Pat Ryan, is running both in the special general election for the 19th District to serve out the rest of the term vacated by former Rep. Antonio Delgado’s selection as New York’s lieutenant governor, and in the regular primary for a full term in the 18th.

The 19th District’s special election between Ryan and Republican Marc Molinaro, who is also running for the regular primary for a full term for the seat, is one of two special elections taking place in New York on Tuesday.

Republican Joe Sempolinkski and Democrat Max Della Pia are facing off in a special election to serve out the rest of retiring Rep. Tom Reed’s term in the safely-Republican 23rd District based in Western New York.

The regularly-scheduled GOP primary for a full term in the newly-redrawn 23rd District is also taking place on Tuesday. It features a showdown between Nick Langworthy, chairman of the New York Republican Party, and Carl Paladino, a controversial and bombastic fixture in New York politics.