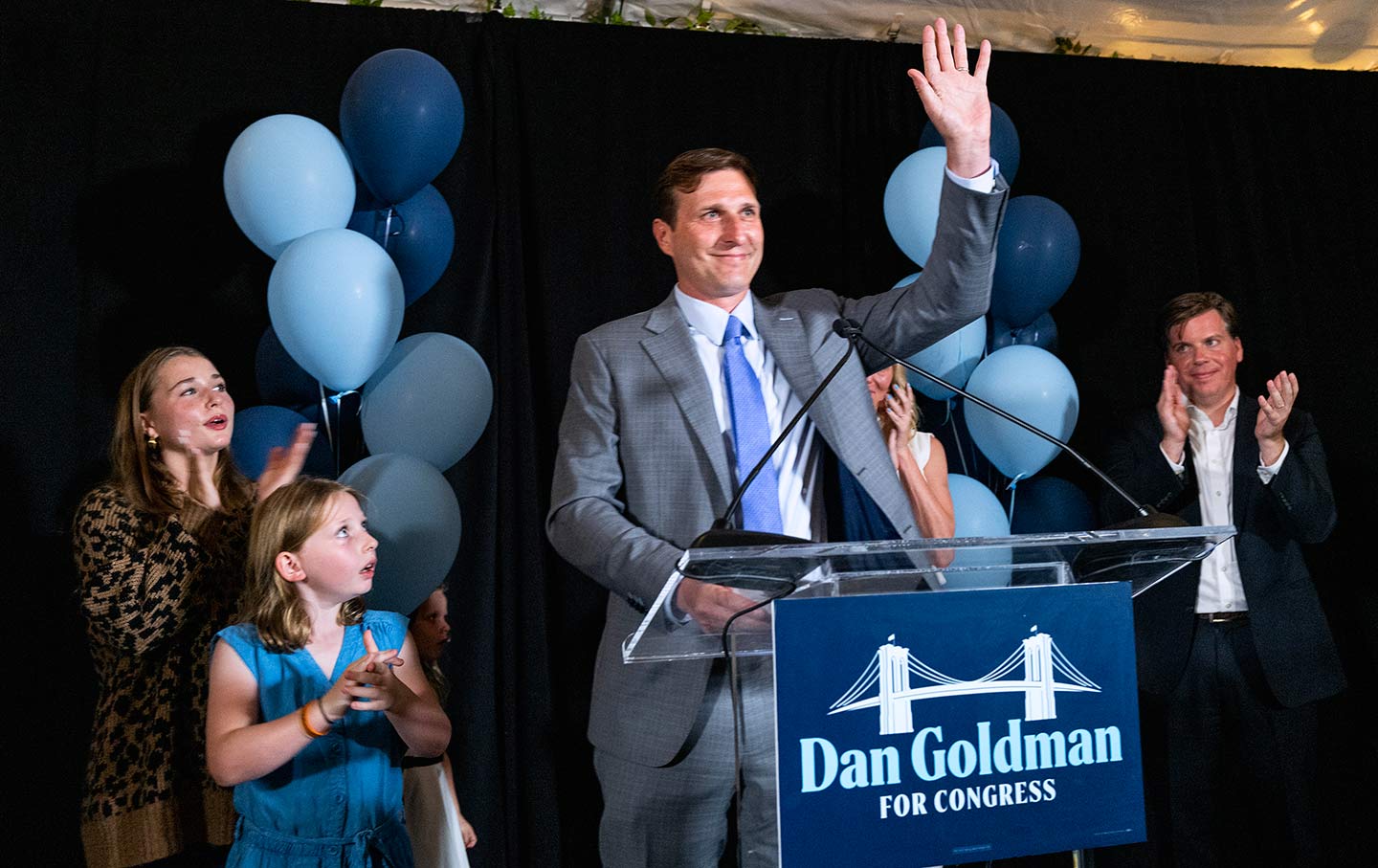 Money can’t buy you love, but it might help you cadge a congressional seat.

Levi-Strauss heir and Democratic attorney Daniel Goldman is narrowly leading in the race for the open seat in New York’s 10th Congressional District, after putting in nearly $5 million of his own money. Meanwhile, three leading progressives split the vote on the left, leaving New York Assembly member Yuh-Line Niou, the strongest of the three, trailing Goldman by 1.5 percent just before midnight on Tuesday, though Goldman claimed victory before all the votes were counted. With 98 percent of the vote in, the top three progressives—behind Niou were Representative Mondaire Jones and City Council member Carlina Rivera—had won around 28,000 votes to Goldman’s 16,700. The Associated Press and other news outlets called the race for Goldman early Wednesday night; with absentee ballots yet to be counted, Niou has not conceded.

Had Jones, bigfooted out of his district by Democratic power brokers, stayed where he was, some things are almost certain: Niou would be going to Congress; Jones would have had a better shot at keeping his seat; and New York progressives might be sending two young leaders to Washington, instead of none (barring an absentee ballot miracle for Niou).

Progressives notched at least one win: in New York’s 12th district, where Representative Jerry Nadler, endorsed by the Working Families Party along with Senate majority leader Chuck Schumer, defeated longtime colleague Carolyn Maloney after they were both thrown into one newly drawn district. Unlike Jones, Nadler resisted pressure to leave his district—Carolyn Maloney backers wanted him to move into the open 10th district. The longtime Upper West Sider told the crowd at his victory party he wouldn’t move: “This place is my home. I love the people of this community and what they represent.”

Representative Sean Patrick Maloney, the guy who pushed Jones out of his suburban New York district, easily beat back a challenge from progressive state Senator Alexandria Biaggi. As the head of the Democratic Congressional Campaign Committee, Maloney was criticized for using his clout to muscle the gay, Black progressive Jones out of his home district. But it worked out for him.

Maybe the best news came in a special election for New York’s purple 19th district, where Antonio Delgado’s ascension to lieutenant governor nominee created an opening. Democrat Pat Ryan beat back conservative Republican Marc Molinaro, in a race in which Ryan centered abortion rights after the Dobbs decision. It’s not a long-term victory; Ryan has to run again in November, in an adjacent district with different lines. But at a time when Democrats are looking for signs they can avoid a midterm blowout, Ryan’s solid victory was a happy harbinger. The Working Families Party also backed Ryan. “We’re proud that the WFP ballot line served as the margin of victory in the NY-19 special election,” the party’s New York director, Sochie Nnaemeka, said in a statement. “Pat Ryan’s victory is a major win for working families in the district and builds momentum heading into the general election in the redrawn NY-18.”

It seemed on-brand for the wealthy Goldman, an attorney for House Democrats during the first Trump impeachment, to claim victory before all the votes were counted. The nearly $5 million of his own money he invested let him spend an astonishing $3.91 million on slick television ads. Asked by reporters what it meant to put his private millions into a public race, Goldman waxed philanthropic, claiming he did it all for the 10th district’s voters.

“I had a decision to make in a short race, which is whether I’m going to spend more time talking to donors or voters,” Goldman said. “I put my own money in so that I could get out and speak to the voters, and what I can assure the voters is that I will be beholden only to their interests and none other.” Still, he did find time to take cash from Trump backer and real estate titan Stephen Ross, as well as from employees of Goldman Sachs and Blackstone, plus many attorneys. Progressives challenged the range of troublesome investments Goldman has made over the years, from gun manufacturers to Big Pharma.

On top of his millions, Goldman also benefited from a ludicrous endorsement by The New York Times. Entirely ignoring the two experienced women running right behind him, the Times essentially advised that voters in the 10th district give him on-the-job training, acknowledging that “Mr. Goldman would need to use his first term to convince the large numbers of lower-income and middle-class Americans he would represent that he understands the issues facing those constituents.”

While Niou and Jones united after the Times endorsement at a press conference to blast Goldman and say “New York is not for sale,” progressives seemed not to accept that the only way to prevent Goldman from buying the seat was for them to coalesce behind the strongest candidate—who all along polls indicated was Niou.

In addition to facing Goldman’s millions, Niou coped with a last-minute onslaught of negative advertising from a group calling itself New York Progressive PAC, reportedly a front for real estate interests that had defeated progressive candidates in a earlier set of primaries. They distorted her voting record and also portrayed her as an enemy of Israel for her stance on the Boycott, Divestment, and Sanctions movement, whose right to peaceful protest she supports, while differing with many of the group’s tactics and goals. It may be that with Jewish voters making up almost 20 percent of the 10th, the estimated half-million the group invested in tarring Niou made a difference.

But the most important factor in Niou’s loss is the vanity of the other candidates in refusing to bow out. Last month in Wisconsin, progressive Senate candidate Mandela Barnes prevailed in a once-crowded primary that saw his rivals concede before election day, realizing that a Democratic victory would come down to unity. In New York’s 10th, a Democratic victory is assured, but not a progressive one. Goldman is a liberal and he’ll most likely be a fine Congress member. But the 10th is one of the most progressive districts in the nation, and deserved better. Unfortunately, progressives couldn’t get out of their own way to deliver it.