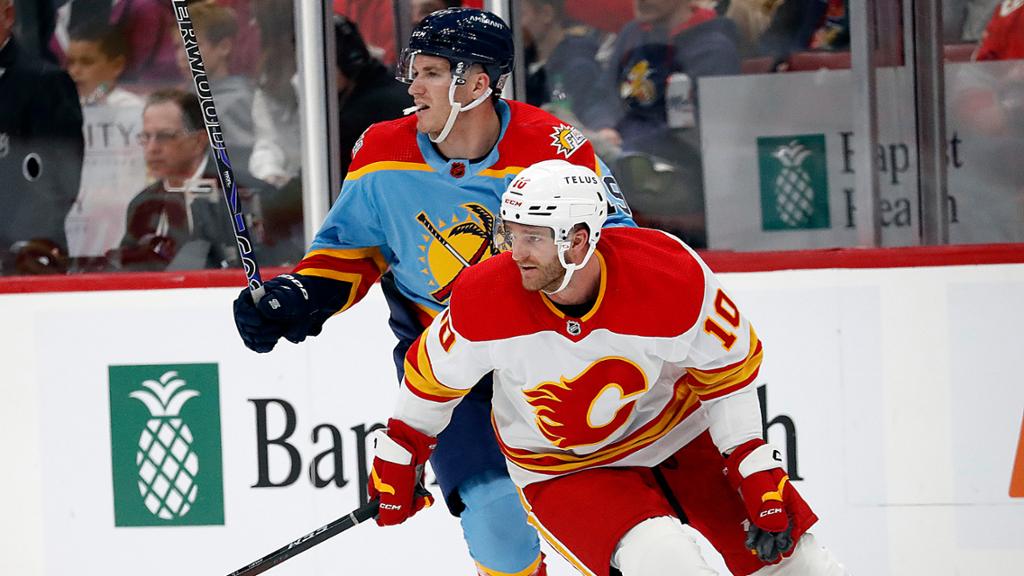 Welcome to the NHL On Tap. Three NHL.com writers will share what they are most looking forward to on the schedule each day. Today, their choices from nine games Tuesday.

Ten days after playing in Florida, the teams that engaged in the biggest trade of the offseason will meet again when the Florida Panthers (10-8-4) visit the Calgary Flames at Scotiabank Saddledome (9 p.m. ET; SN1, SNW, TVAS2, BSFL, ESPN+, SN NOW). It will be Matthew Tkachuk‘s return to Calgary, where he played the first six seasons of his NHL career before the trade that sent him to Florida on July 22. The move to the Panthers seems to agree with Tkachuk, who leads them with 29 points (10 goals, 19 assists) in 20 games. He had a goal and an assist in the first game Nov. 19, but the Flames won 5-4 in a shootout. Jonathan Huberdeau, one of the major pieces going to Calgary for Tkachuk, scored in the shootout, and defenseman MacKenzie Weegar, the other full-time NHL player going to the Flames, was plus-1 with four shots on goal in 16:25 of ice time. Calgary (9-9-3) has one win in four games (1-2-1) since defeating Florida but will have the advantage of the Panthers playing the second game of a back to back after losing 4-3 in overtime at the Edmonton Oilers on Monday. — Adam Kimelman, deputy managing editor

Video: [email protected]: Tkachuk ties it up against his former team

Remember last season when the expansion Seattle Kraken finished last in the Pacific Division? What a difference a season makes. The Kraken (13-5-3) have won five in a row and are six points behind the Vegas Golden Knights for first place. They’ll go for their sixth straight win, which will set a team record, when they play the Los Angeles Kings (12-9-3) at Crypto.com Arena (10:30 p.m. ET; BSW, ROOT-NW, ESPN+, SN NOW). Other than how Seattle is doing overall, the big feel-good story is goalie Martin Jones, who is 11-4-2 with a 2.58 goals-against average, .903 save percentage and one shutout in 17 games (16 starts). It’s been a tremendous turnaround for the Kraken and Jones, who was 12-18-3 with a 3.42 GAA and .900 save percentage in 35 games (33 starts) for the Philadelphia Flyers last season. There’s a lot to be optimistic about in the Emerald City. — Tracey Myers, staff writer

The Vancouver Canucks have their sights set on a fourth straight win when they host the Washington Capitals at Rogers Arena (10 p.m. ET; SNP, NBCSWA, ESPN+, SN NOW). The Canucks (9-10-3) began the season with seven straight losses (0-5-2) but are now gaining traction in the Pacific by going 5-1-0 in their past six games. Quinn Hughes has 21 assists in 18 games for the Canucks, tied with Erik Karlsson of the San Jose Sharks for first in the NHL. After three straight road wins at the Colorado Avalanche, Golden Knights and Sharks, Vancouver opens a four-game homestand. Washington (9-11-3) plays the second of a six-game road trip, losing 5-2 at the New Jersey Devils on Saturday. Capitals captain Alex Ovechkin is 10 goals shy of tying Gordie Howe (801) for second in NHL history. Wayne Gretzky leads with 894. — Mike G. Morreale, staff writer

The Hurricanes (11-6-5) ended a five-game losing streak with a 3-2 win against the Flames on Saturday. They are 4-for-9 on the power play in their past two games after going 0-for-20 in their previous six. Pittsburgh (11-8-3) had a five-game winning streak end with a 4-1 loss to the Toronto Maple Leafs on Saturday.

Karlsson had two assists for San Jose (7-13-4) in a 4-3 overtime loss to Vancouver on Sunday to become the first defenseman in Sharks history to have 20 points in a calendar month. He has 21 points (five goals, 16 assists) in 13 November games with two games left. Captain Nick Suzuki has five points (two goals, three assists) in his past five games for Montreal (11-9-1), which has won three of their past four (3-1-0).

Lightning captain Steven Stamkos is two points from becoming the first player in team history to reach 1,000. Tampa Bay (13-7-1) has won six of seven (6-1-0). David Pastrnak has 13 points (six goals, seven assists) during a nine-game point streak for the Bruins (18-3-0), who have won an NHL record 12 straight home games to begin a season.

The Islanders (15-8-0) are one of four teams (New Jersey Devils, 13; Boston Bruins, 10; Toronto Maple Leafs, 10) with at least 10 wins in November and can become the third team this season with two winning streaks of at least five games (Bruins, seven; Kraken, five). They play the Flyers for the second time in three days after a 5-2 win at UBS Arena on Saturday. Philadelphia (7-10-5) is 0-7-3 in its past 10 games and will be without defenseman Tony DeAngelo because of a lower-body injury. Scott Laughton is expected to play after the forward missed four games with an upper-body injury.

Nashville (9-9-2) will play its first game since Nov. 23 after home games against the Colorado Avalanche (Nov. 25) and Columbus Blue Jackets (Nov. 26) were postponed because of a water main break that impacted the main concourse and event levels at Bridgestone Arena. Ducks goalie John Gibson is questionable with an undisclosed injury sustained in the third period of a 5-4 loss to the Kraken on Sunday. Gibson allowed five goals on 19 shots and Anthony Stolarz made six saves in relief for Anaheim (6-15-1).

Goalie Alexandar Georgiev is 6-1-0 with a 1.84 GAA, .947 save percentage and one shutout in his past seven games (all starts) for Colorado (12-6-1), which has won eight of 10. The Avalanche are missing forwards Gabriel Landeskog (knee), Darren Helm (lower body), Valeri Nichushkin (ankle) and Evan Rodrigues (lower body). The Jets (13-6-1) begin a four-game homestand after going 2-1-0 on a three-game road trip that concluded with a 7-2 at the Chicago Blackhawks on Sunday.

Panthers defenseman Aaron Ekblad had one assist in the loss at Edmonton to become the first Florida defenseman to reach 300 points (101 goals, 199 assists) in the NHL. Since making his season debut Nov. 1, forward Adam Ruzicka leads the Flames with five goals in 11 games.

Andrei Kuzmenko has 10 points (four goals, six assists) during a five-game point streak for the Canucks. Capitals forward T.J. Oshie has four points (one goal, three assists) in three games after missing the previous 11 because of a lower-body injury.

It’s the finale of a three-game road trip for the Kraken, whose .833 points percentage away from home is third behind the Devils (.909) and Golden Knights (.875). Forward Andre Burakovsky leads Seattle with 21 points (seven goals, 14 assists) in 21 games and rookie forward Matty Beniers is second (18 points; seven goals, 11 assists). This is the second of a four-game homestand for the Kings, who are 1-2-2 in their past five. Forward Gabriel Vilardi, who leads the Kings with 11 goals, is day to day with an upper-body injury.