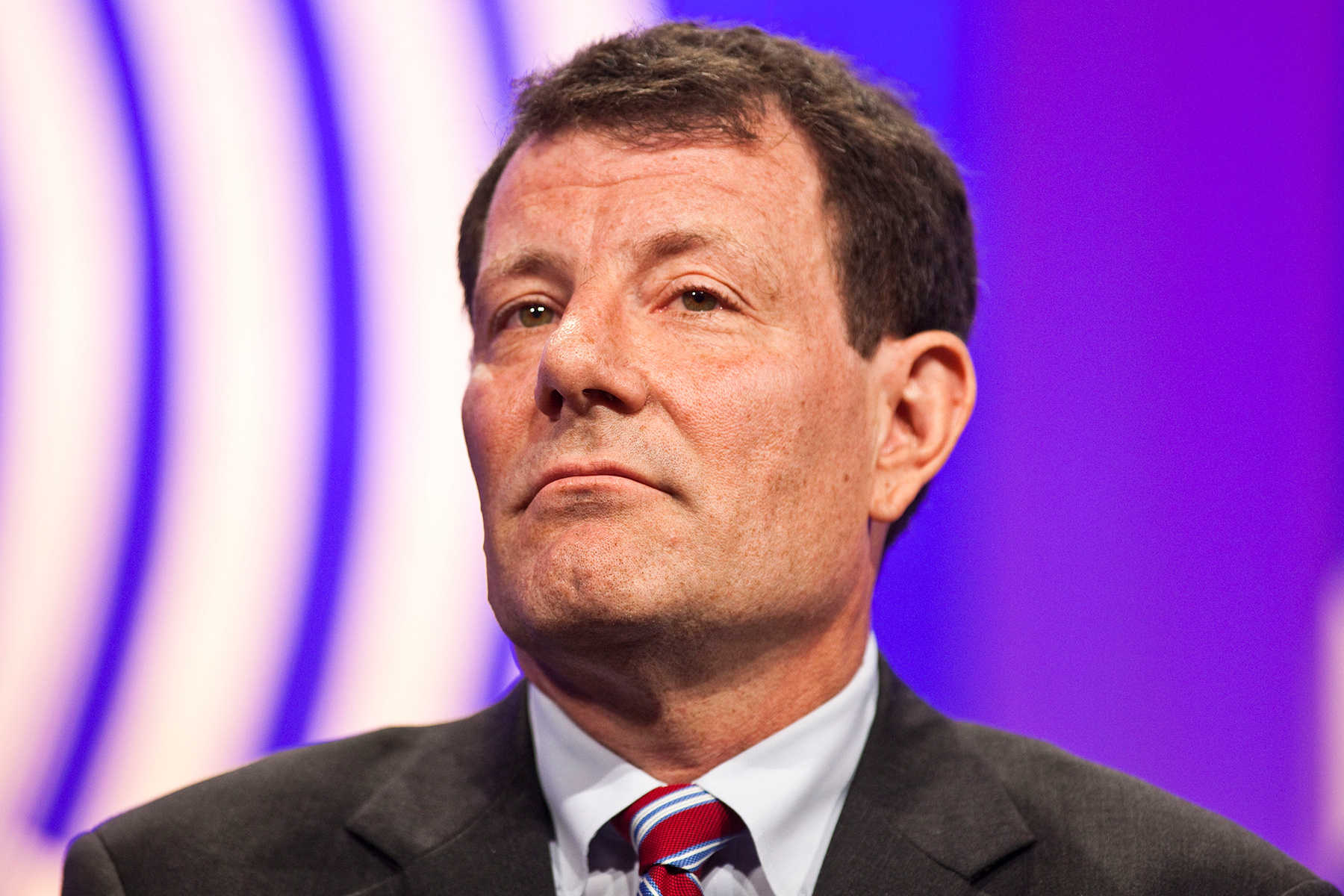 After being stymied in a political run for governor as a Democrat, Nick Kristof is doubling back to the New York Times as a journalist. But his return to his columnist gig is marked by a tangled web of journalistic and financial conflicts.

New York Times journalists are strictly prohibited from participating in overt political activity and giving. But Kristof has yet to formally wind down the campaign infrastructure from his failed bid to become Oregon governor. His campaign PAC, Nick for Oregon, has recently been donating tens of thousands of dollars to Democratic politicians in the state.

And Rolling Stone has learned that the $1 million left over in his campaign war chest has just been transferred to a new political action committee co-directed by his spouse, Sheryl WuDunn.

The unusual new political committee, Kristof tells Rolling Stone, won’t be involved in elections. Rather it will spend its funds supporting a signature jobs-training program signed into law this spring by sitting Oregon Democratic governor Kate Brown. While his name is not on the new PAC, called Oregon Strong, Kristof is still intimately involved: “I’m still engaged in the planning for this,” he says. “I was emailing people this morning about it, and trying to set up a meeting.”

Even as the nation’s newspaper of record is welcoming Kristof back, this scramble to cement a positive impact from his ill-fated run for office suggests Kristof is not, in fact, done with politics. It’s the kind of conflict of interest, observers suggest, that the Times would never accept from its journalistic rank-and-file. Edward Wasserman, a professor of journalism and the former dean at the U.C. Berkeley graduate school of journalism, calls out the Times for an “amazing reluctance to apply its own rules” to star columnists like Kristof.

Kristof was aces at raising money, collecting more than $2 million. But his political career hit a brick wall in February. The state supreme court ruled that the journalist — raised in the country town of Yamhill, Oregon, where he now owns a farm — had failed to follow the proper steps to re-establish himself as a resident in Oregon before seeking to become the state’s top office holder.

After briefly contemplating a bid for Congress, Kristof has been Substacking, working on a memoir, and writing the odd guest-column for the Times, while he mulled whether his future would be in print or politics. Kristof ultimately decided, he says, “I can do the most good using that journalism toolbox.”

On Monday, the New York Times announced that Kristof will returning to the fold as a columnist. “We are delighted to have him back,” wrote Opinion editor Kathleen Kingsbury, insisting that Kristof “has redefined what a modern columnist could be.”

It’s an eyebrow raising move for the Times, which maintains strict prohibitions against staffers participating in political activity. The paper’s ethics guide insists that “journalists have no place on the playing fields of politics” and bars journalists from even wearing political buttons or driving a family car with a political bumper sticker. (In early 2021, a contract editor for the Times was fired after tweeting that she got “chills” seeing president elect Joe Biden’s plane land at Joint Base Andrews in advance of his inauguration.) For most employees, the Times’ prohibitions against political donations are similarly firm. “Staff members may not themselves give money to, or raise money for, any political candidate or election cause,” they read. “Any political giving by a Times staff member would carry a great risk of feeding a false impression that the paper is taking sides.”

The paper has long been criticized for having a different set of professional standards for its biggest names. And Kristof’s sunny homecoming after his frustrated political bid seems to fit that pattern. Wasserman sees Kristof as journalistically tainted by his political run, as well as by what Wasserman sees as unresolved ambitions to seek elective office. “It’s impossible to to imagine a future for Kristof as an opinion journalist for the Times, that would not involve an absolutely-well-founded fear that he’s using his column as soapbox” to brighten his political star, Wasserman says.

“I admire his work quite a lot,” Wasserman adds. But the conflict of interest posed by Kristof’s political forray, he insists, “corrupts the expectation of evenhandedness” that a reader needs to have in a journalist. Can readers trust “that you’re getting commentary from him that reflects his best judgment of what the world needs,” Wasserman asks, “rather than his calculation as to what Nick Kristof might need as a politician?”

Even as the Times is touting his return to column writing, Kristof still hasn’t put his ill-fated campaign to rest. His “Nick for Oregon” campaign website is still live, and the campaign is still active, according the Secretary of State. On the day of the announcement of his return to the Gray Lady, Kristof had nearly $1 million left his campaign warchest.

But hours after Rolling Stone contacted Kristof’s campaign treasurer, Elizabeth Wilson, about the fate of that cash stockpile, the funds were transferred to the new PAC, Oregon Strong. According to state records, that committee is co-directed by Wilson, as well as Kristof’s spouse, Sheryl WuDunn. In other words, nearly half the money Kristof raised for his political bid remains under family control. (Kristof and WuDunn are longtime professional partners as well as spouses, having coauthored two books and even shared a Pulitzer Prize when both worked at the Times.)

A spokesperson for the Oregon Secretary of State’s office describes the transfer of Kristof’s campaign funds to a family-controlled PAC as licit, so long as the monies are not converted to personal use.

Kristof tells Rolling Stone that he’d originally intended to spend campaign funds directly to support the state job-creation program, but that state administrative delays setting up the program kept postponing the plan. Recognizing it was “not entirely kosher” for him to continue to direct a campaign PAC while returning to journalism, Kristof decided to move the money to the new vehicle directed by WuDunn.

Oregon Strong was launched just two weeks ago, on July 17. Its political mission, listed on the secretary of state’s website, is vague: “Supporting evidence-based policies that address Oregon’s challenges and make it a better place for its people.” Despite vowing it will support Democratic Gov. Brown’s top policy win from her final year in office, Kristof calls the political action committee’s work “non political.”

Rolling Stone reached out to the Times about the conflicts posed by Kristof returning to the journalistic fold after his detour into politics and soliciting donations from powerful acquaintances. Charlie Stadtlander, a communications director for the paper, writes: “Nick and his editors have already discussed how they will handle potential conflicts of interest.” He insisted that, “Nick will either refrain from writing about donors or disclose the relationship to readers.” (Stadtlander declined to answer questions about the disposition of Kristof’s campaign funds.)

In recent weeks, Kristof’s campaign PAC also emerged as a formidable campaign donor, giving more than $40,000 to local, state and even national politicians from Oregon. That included $10,000 to Friends of Tina Kotek, who is now the 2022 Democratic nominee for governor and whom Kristof has also endorsed. It also included $1,000 to the campaign of Jamie McLeod-Skinner, an Oregon progressive running for U.S. Congress.

The Times’ ethics restrictions are particularly strong in prohibiting a run for political office. “Seeking or serving in public office plainly violates the professional detachment expected of a journalist,” the prohibition reads. “It poses a risk of having the staff member’s political views imputed to The Times, and it can sow a suspicion of favoritism in The Times’s political coverage.”

When pressed about Kristof’s political run, Stadtlander, the Times spokesman, insisted there was no issue. “Our ethical journalism standards do apply to all of our journalists, including Opinion columnists,” he said. “When Nick decided to pursue public office, he stepped down as a journalist. As he returns to his role of writing for us later this year, the Times will still require that he not engage in any political activity, including fundraising or campaigning for officials seeking election.”

Outside observers see a far messier situation. And Kristof himself concedes he’s going to need to rebuild trust. “It’s a legitimate thing to wonder about,” he says of critics who question whether he’s truly done with politics. Asked about whether his ambitions could include another electoral bid, Kristof deflects like, well, a politician. “My ambitions are to cover the Taiwan crisis, to cover Ukraine, to cover homelessness.”

When I note that’s not a hard “No,” Kristof pauses. “I certainly have zero plans to run for office,” he says, finally. “I’m completely planning to return to journalism.”