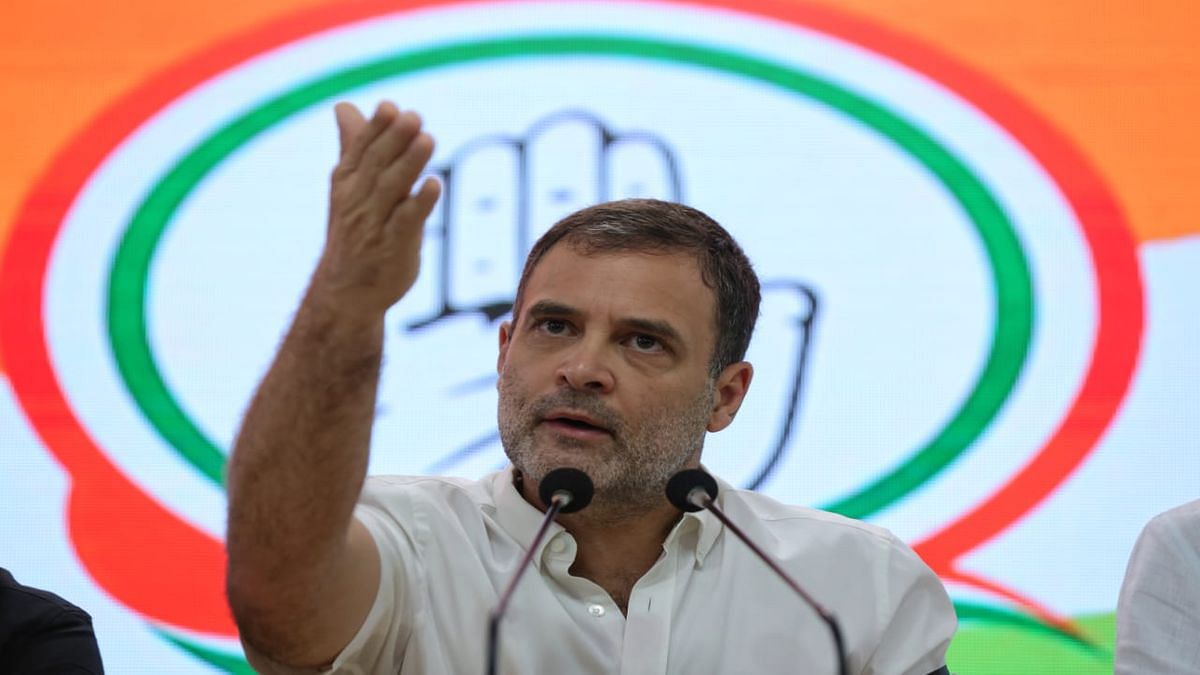 New Delhi: Lashing out at the Centre on issues like price rise and inflation, former Congress Party President Rahul Gandhi on Friday said that India is witnessing the death of democracy.

“How do you feel about the death of democracy? What this country built in 70 years was destroyed in 8 years. There is no democracy in India today!,” senior Congress leader Rahul Gandhi said while addressing a press conference in the national capital today.

In a veiled attack on PM Modi, Union Home Minister Amit Shah, two top-notch businessmen, Rahul Gandhi said, “Today, there is a dictatorship of 4 people in India. We want to raise the issue of inflation, unemployment etc. We want to discuss the society being divided.”

“We (Opposition) are not allowed to speak in Parliament. We are arrested on the road. This is the condition of India today. Media can’t show courage in the current environment,” he added.

Rahul Gandhi alleged that the Centre has put “its people” in government machineries.

“In a democracy, the Opposition fights on the strength of institutions. Meaning the country has a legal structure, there is an electoral structure, which as on date, is the media of the country. But, in all these institutions, the Central government has put its people,” Rahul Gandhi said.

Congress leader Rahul Gandhi is holding a press conference at the party headquarters in New Delhi amid the ongoing protests by the Congress party in the national capital on issues of price rise and unemployment.

The Delhi Police has imposed Section 144 CrPC in the entire area of the New Delhi district except for Jantar Mantar. The police said that protest/dharna/ gherao in the area of New Delhi district on August 5 cannot be permitted in view of security, law and order and traffic reasons.

Senior Congress leader Ajay Maken earlier this week said that they had received a letter from the DCP that they can’t protest on August 5 and the AICC (All India Congress) was turned into a Police cantonment. “The government may suppress us as much as they want but we’ll protest against inflation, unemployment, GST on edible items and go ahead with our schedule even if jailed,” he said.

Leader of Opposition in Rajya Sabha Mallikarjun Kharge meanwhile sparred with Leader of the House Piyush Goyal on Thursday over ED summons issued to the Congress leaders. While Kharge accused the central government of trying to demoralise and intimidate the Opposition, Goyal responded by claiming that the government does not interfere in the functioning of law-enforcement agencies.

This comes two days after the Enforcement Directorate (ED) sealed the Young Indian Limited office located in the National Herald building on Wednesday.

Rahul Gandhi had earlier said the investigation into the National Herald case was an intimidation tactic by the BJP. The case pertains to the alleged financial irregularities in the Congress-promoted Young Indian Private Limited, which owns the National Herald newspaper.

“We are not afraid,” he said, adding, “Whatever they [BJP] do won’t make any difference. I will continue to do the work to protect our country, its democracy and brotherhood.” He added, “They think by putting a little pressure they can silence us. We won’t be silent. We will stand against what the BJP is doing. We will not be intimidated.”