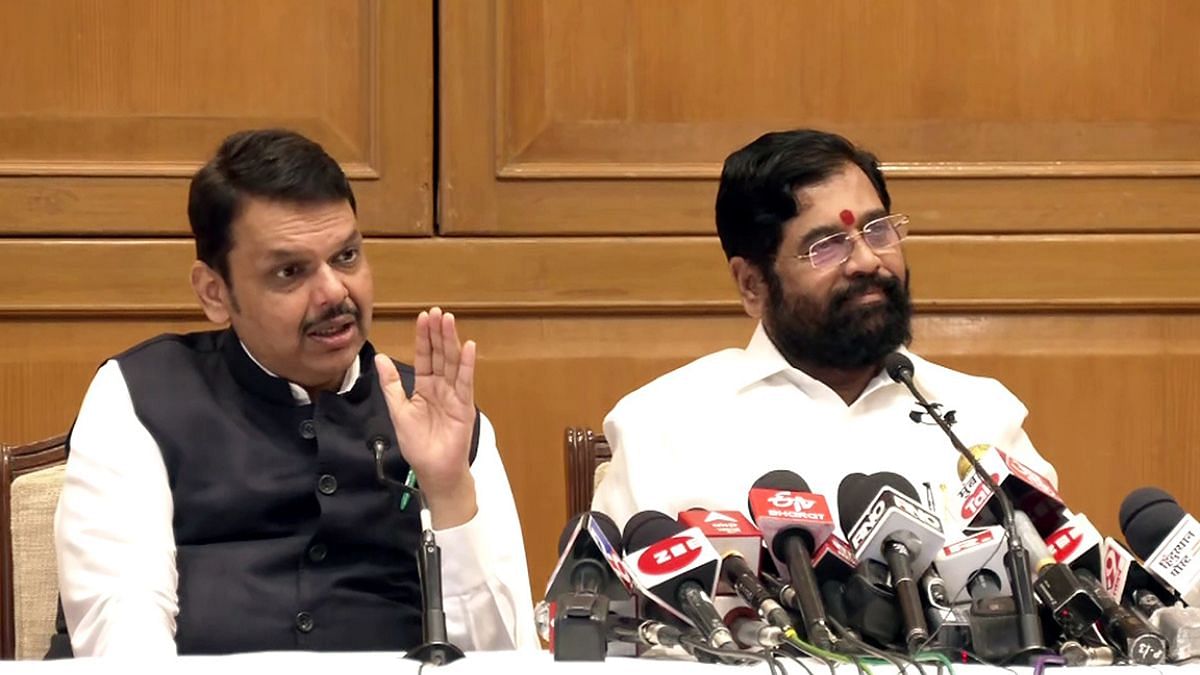 Mumbai: There has been a running joke in the corridors of Maharashtra’s Mantralaya over the past few days that if the chief minister and deputy chief minister got into an elevator together, they’d probably have a cabinet meeting.

The humour stems from the fact that it has been three weeks since a new government has come to power, but there are only two ministers — Chief Minister Eknath Shinde and Deputy Chief Minister Devendra Fadnavis — looking after all of Maharashtra’s 36 districts, 31 departments, 30 commissionerates, and 29 directorates.

Leaders from the ruling coalition, however, claim that the lack of a full cabinet has not hampered the day-to-day functioning of the government, and that files are being cleared by the CM’s and deputy CM’s offices.

A BJP leader said three cabinet meetings have been held so far and that all files from across departments are being cleared “without a glitch”.

“The deputy CM starts his day at 10am and works till 2am. The CM also has a similar schedule. Both are available for secretaries of all departments to meet, unlike the former CM (MVA’s Uddhav Thackeray). There have been three cabinet meetings so far and over 500 tenders of different small and big works across departments have been approved,” he said.

Thackeray often faced criticism for working from home through video conferencing rather than meeting people personally when he was CM, which the Shiv Sena had defended as not affecting his performance and attributable to the pandemic and a spine surgery he had undergone.

However, some civil servants and leaders concede that a two-man show, however efficient it may be, is not an ideal scenario.

According to some civil servants, the localised focus of “guardian ministers” (who are put in charge of districts) is missing, as is the close supervision and planning that ministers dedicate for their assigned portfolios.

Moreover, the majority of the key decisions in the two-person cabinet meetings so far have been those seen as politically sensitive, significant especially for the BJP.

“The CM and deputy CM are experienced administrators, but we don’t want governance to become an issue. We have urged Shinde saheb to undertake a cabinet expansion soon,” a rebel Sena MLA who was part of the Maha Vikas Aghadi’s council of ministers told ThePrint.

“He asked us to just wait and watch for a couple of more days, so it is just a matter of time now,” he added.

Fadnavis was quoted as saying Wednesday that the cabinet expansion would happen soon.

Leaders from the ruling coalition cite several reasons for not having expanded the cabinet yet. Some say that leaders of both parties — but especially from the BJP — were tied up due to the presidential elections.

Some others say their leaders wanted to wait for clarity on the Supreme Court’s stand on this government considering it came to power under unusual circumstances.

The new government took oath on 30 June after 10 days of political drama, during which some Shiv Sena MLAs, under the leadership of Shinde, rebelled against the Uddhav Thackeray-led MVA government. The rebellion caused the MVA government —  which consisted of the Shiv Sena, Nationalist Congress Party (NCP), and Congress — to fall.

The former minister who was quoted earlier said the cabinet expansion has been on hold as “several people needed to be taken into confidence”.

“With disqualification petitions pending against us in court, we had to consult lawyers,” he said. “The presidential election also pushed it on the backburner. The arrangement of how many ministers from each side is said to have already been hammered out between the CM and deputy CM,” he added.

The Thackeray-led Shiv Sena and the Shinde-led rebel camp have filed a clutch of petitions against each other that the Supreme Court is hearing. The next hearing is on 1 August.

A BJP functionary close to Fadnavis told ThePrint that the two sides had agreed upon a “two-thirds by one-third arrangement” (that is, two thirds for the BJP and one third for the rebel camp) even before the government was formed. With 106 MLAs, the BJP will have more ministers than the Shinde-led Sena rebel faction, which has 50 MLAs, including 10 independents.

“The delay has been simply due to our leaders being busy with the presidential election on 18 July and the counting Thursday,” he added.

Opposition leaders, meanwhile, have described the government as “illegal” because of how it came to power.

Shiv Sena Rajya Sabha MP Sanjay Raut, for instance, told reporters last week that the government was “illegal” and even many days after its formation “ministers still can’t take oath”.

“There is just one deputy CM and CM as ek duje ke liye (for each other). This is a new movie in politics. It will also end (tragically) the way the movie (called Ek Duje Ke Liye) ended,” he said.

A second senior BJP leader pointed to how both the chief minister and deputy chief minister have started field visits, something that former former CM Thackeray “was rarely known to do” due to his health issues.

However, the principal secretary of a department in the Mantralaya told ThePrint, requesting anonymity, that there was some disruption in the government’s normal functioning because “instead of going to the department’s minister, files are having to be sent directly to the CM”.

“In the absence of a full-fledged cabinet, the CM is virtually the minister of all departments. However, the files are being smoothly cleared and are coming back to us. If there is a problem, I can follow up with the CM’s additional chief secretary and principal secretary,” the official said, but added the state government is falling behind in its preparedness for the monsoon session of the legislature.

“Responses to questions raised by MLAs need to be drafted and approved by the ministers for them to reply in the house. The monsoon session will have to be conducted latest next month. We will have to wait for the cabinet expansion to prepare for it though,” he said.

In the three cabinet meetings the chief minister and deputy chief minister have had so far, they have taken at least 13 decisions. Eleven of these serve political agendas of the BJP — such as bringing back the Jalyukta Shivar scheme, which was known to be Fadnavis’ flagship when he was CM, and approving the implementation of Prime Minister Narendra Modi’s pet schemes such as Swachh Maharashtra on the lines of Swachh Bharat and AMRUT (Atal Mission for Rejuvenation and Urban Transformation).

The Shinde-Fadnavis cabinet has also decided to move the contentious Metro car shed for the underground Colaba-Bandra-Seepz Metro back to the eco-sensitive Aarey, reversing the Thackeray-led MVA’s decision.

In addition, the two-man cabinet reversed other decisions of the MVA government, such as restoring direct elections for council presidents and sarpanchs, and enabling farmers to vote for polls to the Agriculture Produce Marketing Committees.

Notably, the two ministers scrapped the MVA’s decisions to rename Aurangabad as Sambhajinagar, Osmanabad as Dharashiv, and the Navi Mumbai International Airport as DB Patil Airport, saying they were taken in a hurry. Their cabinet then brought the same decisions back, taking the political credit for them by saying the Shinde-led government approved them after proper vetting.

Also Read: What next for MVA as Uddhav govt falls? Struggle for survival, fresh strategy for BMC polls