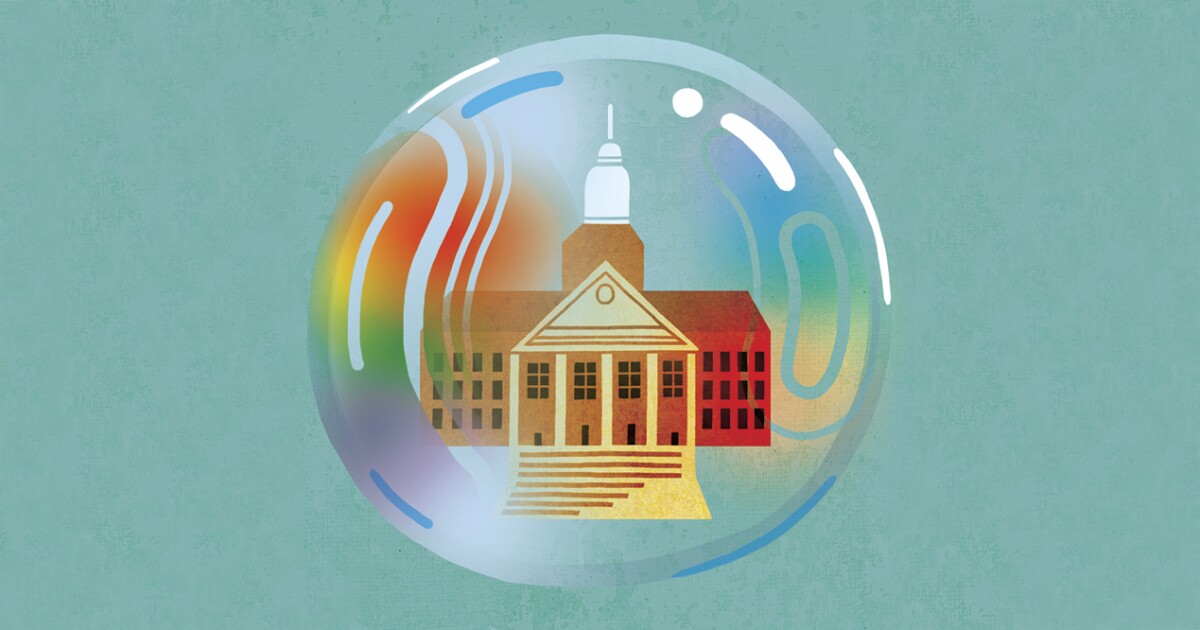 n 2019, Mitch Daniels, president of Purdue University, told a group of students he was trying to recruit a “leading African American scholar,” a person he inappropriately described as “one of the rarest creatures in America.” With all the talk about diversity and inclusion, lesbian, gay, bisexual, transgender, queer, intersex, asexual, and other sexually-identifying college presidents still go largely unrecognized by national organizations. And so, many LGBTQIA+ presidents like myself feel as if we are similarly seen as rare creatures — highly conspicuous and yet still invisible entities on campus.

America’s system of higher education was developed to educate privileged white men. And because higher ed is so slow to change, we shouldn’t be surprised that many of our systems continue to privilege straight white men. The college presidency, similarly, is not immune from straight white male privilege. In fact, as a gay president, I find that, at times, it can be the most visible job in which one can be simultaneously, personally, invisible. And we must recognize from the start that the position is still basically structured for straight married folks. Let me relay an experience I had while interviewing for a presidency in western New York.

When an institution is using a search firm, I’m always upfront with the search consultant about my sexuality. I don’t want to be surprised, and I certainly don’t want a future employer to be surprised during a highly public interview process. When this particular consultant called to say that I was invited for a campus interview, I asked if my partner was welcome to attend. He said, of course, that the visits were scheduled for couples, with some events together and others separate. What struck me about this experience was that, while we planned well, the overt assumption of heterosexism kept surprising us and putting us in awkward positions throughout our visit.

For example, the consultant asked for my partner’s résumé so that they could look into employment opportunities for him. My partner works in secondary education, and a meeting was scheduled with the local school district superintendent. It was my partner’s first meeting of the two-day interview process. When he walked in, he was greeted by, “Wait a minute, I thought the person interviewing for the presidency was a guy?” My partner replied, “He is.” “Oh” was the response. Luckily, my partner is unflappable. Clearly, the presidency is viewed externally as an office for a straight professional couple that fits into common social mores.

We were also careful to check if my partner had to make any public comments or presentations. We were told no, that I would be doing all the public speaking, and his role was to get to know the campus through social settings and by exploring the surrounding community. The search committee scheduled a combined dinner with the college’s advisory board, which is akin to the board of trustees, the foundation board, and the alumni group. The dinner was preceded by the requisite cocktail hour, to see how we worked the room. We split up and went in opposite directions so everyone had personal time with both of us prior to dinner.

Just before dinner, the search committee chair suddenly told us that the group would like to hear opening remarks from both of us. As we had been told that my partner would not be asked to make public remarks, I asked if I should speak on behalf of us both. “No,” the chair replied, “we want to get a feel for how both of you present publicly.” As we sat down, my partner asked me, “What do I say?” My response: “I have no idea, but I’ll go second,” figuring that would allow for any needed reframing.

My partner winged it, saying how much he loved what he saw during the day and how he looked forward to the opportunity to serve as an ambassador for the institution. It was a great, off-the-cuff response, but structuring the evening to see how we presented publicly speaks to the assumption of a “couple” assuming the mantel of leadership, and that the couple they have in mind is heterosexual. It is a sad state that assumptions about gender roles should still be defined in this manner.

Our final event of the two-day interview process was an opportunity for members of the community to meet me and ask questions. Because we were due to leave for the airport right after the meeting, my partner accompanied me. I asked if he should sit up front with me. I was told that he should sit off to the side, but that he would be introduced to the group.

Following the introductions, we had a lively conversation about town-gown relations. Toward the end of the session, a man who identified himself as a judge looked right at me, pointed, and said, “I know what you are going to do, but what is he going to do?” pointing at my partner. My partner looked at me, as if to say, should I answer? I nodded. He reiterated his earlier comments about being an ambassador for the institution and again stated that he was a K–12 educational professional and would be looking for employment opportunities in the area. Had we been a straight couple, our roles would have been easily understood by someone I perceived to be a straight white man. I am grateful to be partnered with one of the kindest people I know, who is extremely smart, good on his feet, and can easily rise above the ignorance of others.

ast-forward to my current presidency. I was named president and within minutes was doing phone interviews with the local press in northern New Jersey. My first interview went well, lasting for about 15 minutes. About 10 minutes later, the reporter called back. Common wisdom tells you to never take the second call from a reporter, but I was brand new and wanted to establish a good relationship with the press.

I answered the phone, and the reporter said, “I’ve been looking at the boards that you’ve served on, and many of them are LGBTQIA+ organizations.” “Yes,” I replied, and stopped. I had learned to make them ask the question about my sexual identity. There was a long pause. “Are you gay?” he asked. “Yes,” I said. “Is it all right if I put that in the article?” the reporter asked, awkwardly. “If you think it’s important,” I replied.

The headline blared, “William Paterson University hires openly gay president.” Many of my William Paterson board members were outraged and wanted to write an op-ed for the local paper in response. I discouraged it, thinking that it wouldn’t help and that since my sexual identity was now out there, no one should be surprised. But again, if I were a straight white male, none of those descriptors would have mattered, much less become the headline.

Higher education has to own some of this. Some of it, we don’t. We need to own that our communities — while committed to diversity and inclusion — don’t always demonstrate behaviors or practices that are consistent when dealing with non–“straight white male privilege.” We are socialized to believe that leaders are straight white men with subservient wives who work for the institution for free because “it’s their job.” It’s sad that our gender norms allow for such abuse.

In the past, professional organizations like the American Council on Education and the American Association of State Colleges and Universities have not collected data and counted LGTQIA+ leaders as part of the diversity mix. Happily, some progress has been made. ACE’s most recent survey of college presidents finally included demographic information on sexual identity. AASCU has three openly gay presidents on its board. It is my hope that the next benchmarks will include LGBTQIA+ Presidents in Higher Education among ACE’s designated associations on the board and perhaps have an openly gay president serve as the chair of the board at AASCU.

Ted Mitchell and Mildred García, the presidents of ACE and AASCU, respectively, deserve credit for their intentional work in these areas. But if we fail to continue making progress we will continue to cast the LGBTQIA+ president as a rare creature — one who is highly visible and yet invisible in the larger systems within higher ed.