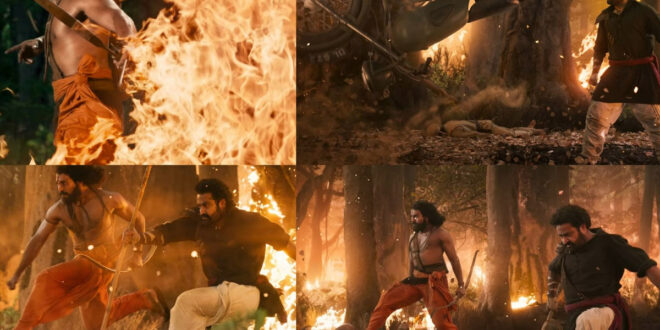 Amid RRR promotion all over India, NTR and Ram Charan along with the star director Rajamouli have been making each event and interview special with stunning revelations and words. The other day at Chennai, the RRR trio stole the show with words of appreciation for one another.

The flawless Tamil speeches of Charan and NTR are on one side, while their praise and expression of bonding remain the highlight. There is one specific statement from NTR that caught the attention of many. NTR emphasizes and reiterated the statement the reads, RRR is going to bring back the lost glory of two stars being in a film.

Needless to say, that RRR started as a multistarrer, but the bonding between the two stars and Rajamouli’s making elevated it as one of the biggest and most anticipated movies, that just as a mutlistarrer. NTR’s words make sense now, as the glory of two superstars sharing the screen used to enthrall and excite the fans of both, very long back. As he said, it was long gone with Rajinikanth and Kamal Haasan’s multistarrers back then directed by Balachandar.

True to that, NTR underlining the excitement of watching two stars on the same screen is going to be real now. RRR is going to reinvent or rather restart the lost trend of multistarrers. Well, those were NTR’s words in Tamil but the same cannot be limited to the Tamil film industry because we can not recall the last ‘proper’ multistarrer in Telugu without going back decades.