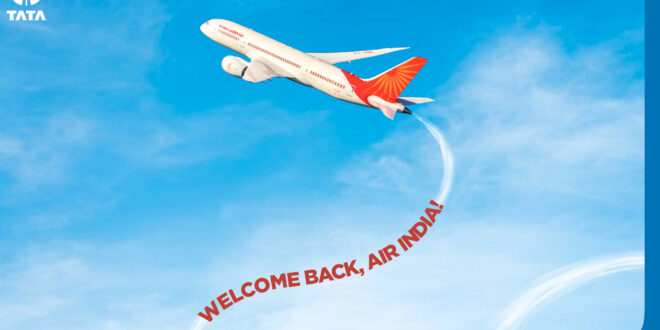 “We are totally delighted to have Air India back at the Tata group and are committed to making this a world-class airline,” said Chandrasekharan post meeting PM Modi. “You arrival was much awaited, @airindiain,” tweeted the Tata Group’s Twitter handle.

Air India owns 141 aircrafts, 42 leased planes and 99 are owned. Tata will get all the aircrafts and along with this Air India controls over 4400 domestic and 1800 international landing and parking slots at domestic airports as well as 900 slots abroad. All these landing, parking and abroad slots will be taken over by Tata from today.

The Tata group also operates Vistara and AirAsia and according to highly reliable sources, the Tata group is planning to bring all the three airlines into one fold. The core management team of Tata is working on it.

Air India was debt ridden mainly due to operational issues. Over the last decade the government of India has provided financial assistance of Rs 1.10 Lakh crore to Air India, yet the losses mounted. Currently Air India is incurring Rs 20 crore loss per day and with the debts becoming a huge burden, the government of India has decided to sell to private firms that have experience in aviation. Accordingly an auction was called and Tata group bagged it.