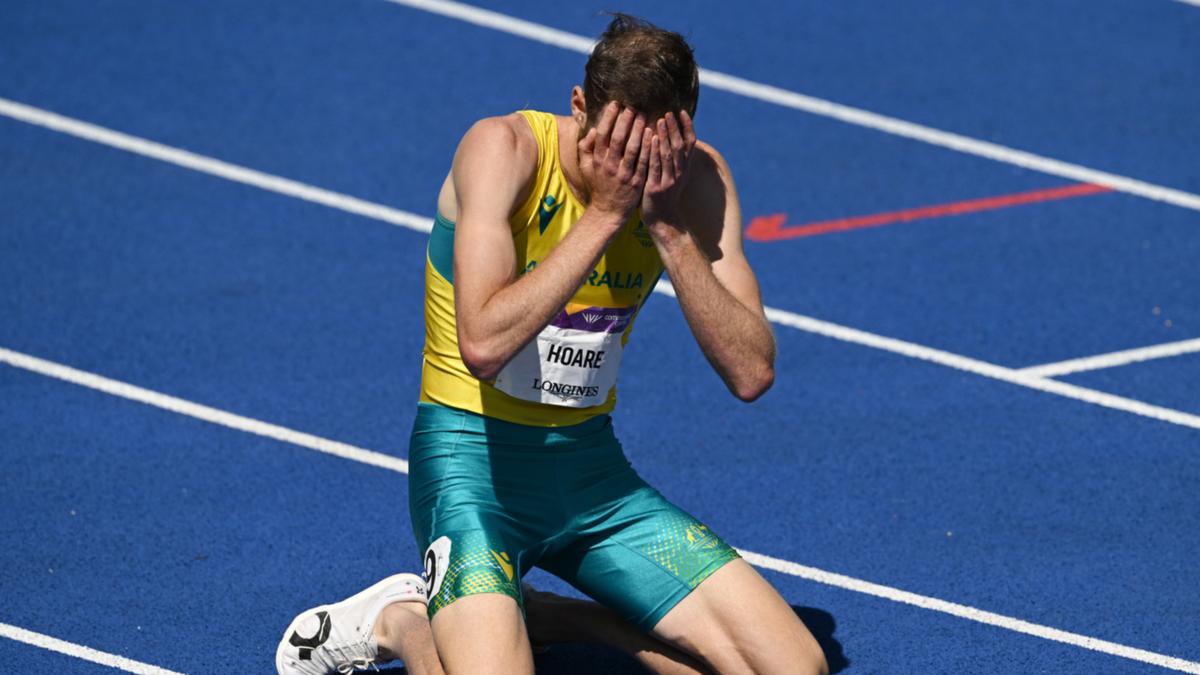 Ollie Hoare could have been excused for not being at his best heading into the men’s 1500m final at the Birmingham 2022 Commonwealth Games.

Not only did he have the letdown of a disappointing world championships campaign this month, he was also grieving the loss of his grandfather and mentor Fred Hoare days after the event in Oregon.

Watch the emotional story behind Ollie Hoare’s famous victory above

But whatever complications those challenges presented, Hoare was able to overcome them.

The 25-year-old is now the toast of the athletics world after becoming just the second Australian after Herb Elliott to win the race on Saturday.

Hoare paid tribute to his grandfather and dedicated his gold medal to him.

“I would like to dedicate that race to my pop. He was a life member at Sutherland Districts Athletics Club and he was a World War II veteran, Sergeant Fred Hoare. He passed away after the world champs,” Hoare told Channel 7.

“It was a difficult time for me because of how bad I raced (at the worlds) and to hear the news of a guy who had a stopwatch at every race I had and growing up through the sport and not having him there to watch was tough.

“But I would like to dedicate that race to my pop because he is the reason my family loves the sport and why I’m here today.

“Pop, I know you are watching, I’ll have a glass of red for you, mate. That was a good one.”

It was a remarkable turnaround for Hoare, who only two weeks ago failed to earn a place in the final at the world championships.

Hoare was fourth at the top of the final straight but powered home to win in three minutes 30.12 seconds, lunging across the line to edge out 2019 world champ Timothy Cheruiyot from Kenya by nine hundredths of a second.

Reigning world champ Jake Wightman from Scotland was third as the first seven runners across the line all broke the Games record.

Hoare stripped more than two and a half seconds off his PB in one of the greatest middle-distance runs ever by an Australian.

Elliott won the mile at the 1958 Games in Cardiff before the switch to metric distances.

EVERY EVENT: Check out the full Commonwealth Games schedule

MEDAL TALLY: Every gold, silver and bronze at Birmingham 2022

LATEST RESULTS: Detailed breakdown of every event at the Games

“It was a sensational run,” he said.

“The golden rule is to stay in contact (with the leaders) and then you are in a position to capitalise when things start to go wrong for others.

“He stayed calm over the last lap and he absolutely capitalised.”

Hoare said he knew he had a shot at a medal at the top of the straight.

“For me, it is about just wanting to belong there and I had to be patient and back myself,” he said.

“That last lap, I wanted to make sure I stayed relaxed on the inside and knew my time would come, and it is hard to believe when you have guys there that are absolute class. I was able to get out and I had the kicker at the end, and, yeah, it was spectacular.”