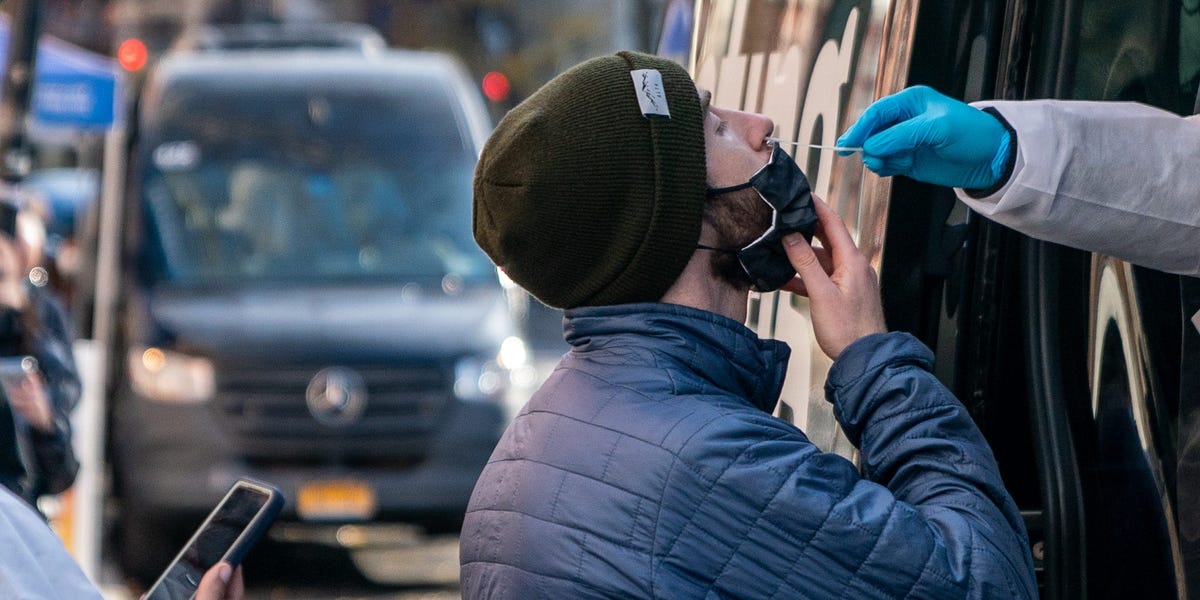 The Omicron variant now represents 59% of COVID-19 cases in the US — up from 23% of cases last week, according to new data from the Centers for Disease Control and Prevention.

Last week’s Omicron estimates are lower than the 73% the CDC had originally projected, but still within the range the agency had predicted for Omicron’s prevalence. The lower projections can be attributed to the CDC updating its estimates when it received more data, which showed a reduced proportion of Omicron, and to the rapid speed of Omicron’s spread, a CDC spokesperson told Insider.

The overall trend is the same. “We’re still seeing steady increase in the proportion of Omicron,” the spokesperson said.

Omicron overtook Delta as the dominant coronavirus strain in the US in the week ending December 25, according to the new data, less than a month after the first Omicron case was reported in California. By contrast, Delta became dominant in the US after roughly four months. Omicron cases are now doubling every two to three days and have spread to all 50 states, according to the CDC.

The variant seems more transmissible than other strains, though scientists aren’t exactly sure why. Disease experts say Omicron could be inherently better at spreading from person to person, or it may simply be better than other variants at infecting vaccinated people.

“I may be perfectly protected against Delta, but the same dose of Omicron may be able to infect me because it gets around that immunity that was protecting me from Delta,” Andy Pekosz, a virologist at the Johns Hopkins Bloomberg School of Public Health, told Insider. “Conversely, maybe it does take only 10 infectious particles to start an infection with Omicron as opposed to 100 with Delta. We still don’t know that information yet.”

For now, Omicron seems better than other variants at evading protection from vaccines or prior COVID-19 infections. A recent report from Imperial College London suggested the variant increased the risk of reinfection by more than fivefold compared with Delta.

That doesn’t necessarily mean vaccinated people will get sicker, though: Early data indicates that Omicron causes less severe illness than Delta does, perhaps because more people have some degree of immunity against the coronavirus already. The CDC noted earlier this month that most Omicron cases in the US have produced relatively mild symptoms, including cough, fatigue, congestion, and runny nose.

Vaccines also seem to protect against severe disease from Omicron, particularly among those who’ve received a booster dose.

An analysis released earlier this month by Discovery Health, South Africa’s largest private health insurance administrator, found that two doses of Pfizer’s vaccine were 70% effective at preventing Omicron hospitalizations and 33% effective at preventing Omicron infections, based on a sample of around 78,000 Omicron tests. A booster dose may raise that protection to 70%-75% against symptomatic disease, according to a recent report from the UK Health Security Agency.

The wave of Omicron cases this winter could be much steeper and swifter than its predecessors.

A model from the University of Washington’s Institute for Health Metrics and Evaluation suggests that more than 60% of all Americans could be infected with Omicron within two to three months. But after that, the number of infections could decline sharply, experts predict.

“When you have something that goes up this quickly, often you see it come right back down,” Dr. Anthony Fauci told “Good Morning America” last week. “Because what will happen is that almost everyone is either going to get infected, particularly the unvaccinated, or be vaccinated.”

Models from the University of Texas estimate that Omicron cases could peak between January 18 and February 3, depending on how well the variant transmits or evades immunity relative to Delta. At the height of the winter surge, COVID-19 cases could reach between 230,000 and 550,000 a day in the US, the models suggest.

Hospitalizations and deaths are also likely to rise the more Omicron spreads. Omicron “has the potential to cause the most severe COVID-19 healthcare surges to date,” the University of Texas researchers wrote, resulting in around 10,000 to 30,000 daily hospitalizations in February.

By March, cases could start to bottom out in the US.

“Anytime you see these new outbreaks popping up, they start off with a bang,” David Dowdy, an epidemiologist at the Johns Hopkins Bloomberg School of Public Health, recently told Insider. “It doesn’t mean that they’re going to stay that way forever.”