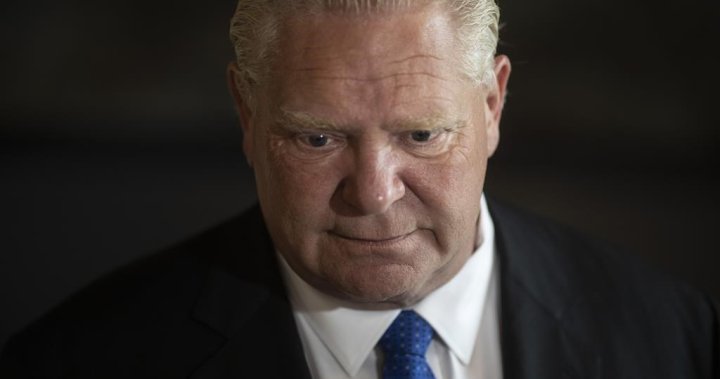 Ontario Premier Doug Ford will launch a legal challenge in order to avoid testifying under oath at the Emergencies Act inquiry, after the commission investigating the Ottawa occupation issued a summons to compel Ford to appear.

Commission lawyers said the summons was issued on Monday after multiple attempts to convince Ford and Minister Sylvia Jones to participate in the process were rebuffed, triggering the extraordinary legal measure to compel the two politicians to appear.

The efforts by the commission to speak with Ford and Jones were outlined in a two-page letter sent to the Canadian Civil Liberties Association — which asked the commissioner to request Ford’s appearance.

The Commission said after receiving and reviewing 800 pages of documents from the Ontario government, the investigative team determined that Ford and Jones — who served as Solicitor General during the occupation — would have evidence “relevant to the commission’s mandate.”

“On September 19, 2022, Commission counsel requested an interview with them,” The letter from Shantona Chaudry, co-lead counsel, read. “This request was refused.”

The commission said it renewed the request “a number of times” and faced an equal number of refusals, leading to the official request to voluntarily testify in Ottawa — which was once again declined.

With all options exhausted, the commission issued a summons to Premier Ford and Minister Jones pursuant to section 4 of the Inquiries Act, forcing them to testify under oath.

The order to testify, however, could trigger another court proceeding as the Ford government looks to use parliamentary privilege as legal justification to escape the commission’s hot seat.

In a statement from the Ministry of the Attorney General, the Ford government indicated it would be seeking a judicial review to “to set aside the summons and receive a stay under the grounds the summons are inconsistent with the members’ parliamentary privilege.”

“The commission’s mandate exists to examine the state of emergency declared by the federal government,” the statement read. “We believe that questions about Ontario’s institutional response will be sufficiently addressed by the testimony from the two senior officials already selected by the commission.”

The developments come after days of testimony from Ottawa city officials regarding the Government of Ontario’s response to the truckers convoy protest-turned-encampment which seized the nation’s capital for several weeks.

Revelations of the rejections also flies in the face of what Premier Ford said last week, when he was asked point-blank whether he had been asked to testify.

“I have not been asked,” Ford claimed on Oct. 17 at a news conference along with Prime Minister Justin Trudeau.

Recent testimony painted a picture of a province reluctant to step in for “political reasons” forcing the City of Ottawa to declare a state of emergency in the hopes of pressuring the Ford government into taking action.

Watson told the commission it was “frustrating” that the province wasn’t being responsive to the situation, and that the Premier declined an invitation to participate in tripartite meetings about the response to the occupation.

“I think he felt it would be a waste of time,” Watson testified. “He said, ‘Look, what’s it going to accomplish? A bunch of people sitting around a table talking and making decisions.’”

Transcripts of a conversation between Watson and Prime Minister Justin Trudeau also captured the growing suspicions the politicians had as to why the premier refused to participate.

“Doug Ford has been hiding from his responsibility on it for political reasons,” Trudeau told Watson.

The Ford government has maintained that the situation was a policing matter and not a political one.

“As we reiterated throughout, politicians do not, and should not, direct specific police operations,” the government said in a statement.

“During the occupation our government remained focused on providing the tools our policing partners needed to bring the situation to an end. Prior to any declaration of emergency, we had already frozen convoy funds from the Give Send Go platform. The Ontario Provincial Police also provided officers to support the Ottawa Police Services.”