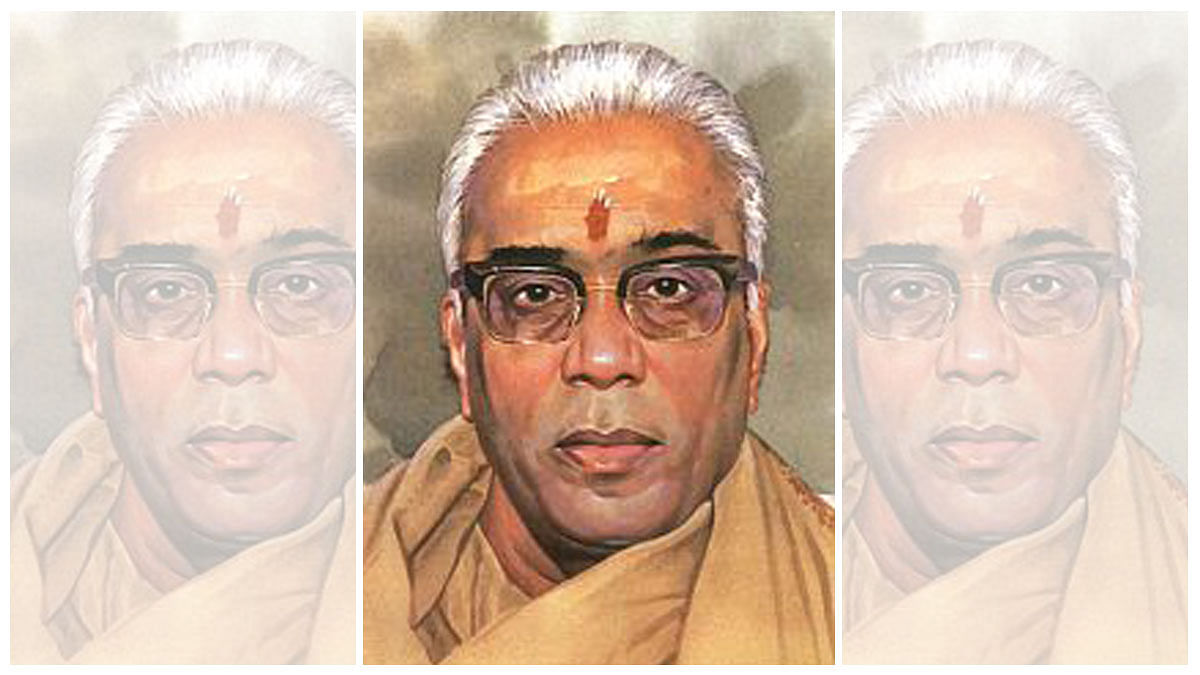 Known to be a brilliant organiser and strategic thinker, Balasaheb remained sarsanghchalak from 1973 to 1994.

His tenure witnessed some of the defining moments of the RSS, such as imposition of the Emergency and the Ram Janmabhoomi movement, which brought the organisation to the centrestage of India’s polity and public discourse.

Here are some lesser known facts about him.

From 1st batch of swayamsevaks

Balasaheb was born to Dattatreya Deoras, known as Bhayyaji, and Bahinabai, known after her marriage as Parvatibai, at Karanja in Balaghat, Madhya Pradesh, on 11 December 1915. He was deeply influenced by his mother.

Bhayyaji and Parvatibai had four sons and five daughters, and Madhukar was their eighth child. At home, his family and friends used to call him ‘Bal’ (which means ‘child’ in Marathi). That is how he got the name Balasaheb. His younger brother Bhaurao (another RSS stalwart who dedicated his life to the cause) was born on 19 May 1917.

Balasaheb Deoras was from the first batch of swayamsevaks who joined the first shakha started by RSS founder Dr Keshav Baliram Hedgewar at Mohite Bara in Nagpur. Although the RSS was founded in 1925 on the occasion of Vijayadashami, the first daily shakha started a few months later in 1926.

Balasaheb was groomed by none other than the RSS founder himself, and that is probably one of the reasons why millions of swayamsevaks, who had never seen Dr Hedgewar, saw his reflection in Balasaheb.

His father initially didn’t like the fact that Balasaheb and Bhaurao were getting inclined towards dedicating their lives to the organisational work of the RSS. Both of them were brilliant students, and Dattatraya Deoras wanted especially Balasaheb to take the Indian Civil Services examination (as it then was).

By the time the RSS was founded in 1925, the Deoras family had shifted back to Itwari Mohalla in Nagpur. Balasaheb was in the sixth grade when he joined the first RSS shakha. His enthusiasm was infectious and he brought in many of his friends to the shakha, where Shamrao ji Gadge was their instructor (gana shikshak). This bunch of young school going boys used to play games and listen to the tales of bravery told by Gadge. Balasaheb later made his younger brother Bhaurao also join the RSS. They were always together and were very close.

Also Read: Dharma, Hinduness, rashtra — a glossary on Hindutva-Hinduism debate & what it means for RSS

Balasaheb once told his mother, “My friends from RSS will come for a meal to our home. But I want them to be treated like me, whatever their caste is. They should be served food in the same utensils which are used for other members of the family. I do not want any kind of discrimination on the basis of caste.”

His mother agreed, and from then onwards, no questions were asked in the Deoras family about the caste of swayamsevaks who visited and had food at their home. It was an uncommon practice in the country during that era, when caste-based discrimination was rampant.

This resolve to do away with caste-based discrimination and establish a just and equal society remained close to Balasaheb’s heart. While delivering a lecture at Vasant Vyakhyanmala (spring lecture series) on 8 May 1974, shortly after becoming the sarsanghchalak, he categorically said, “We should accept that untouchability is a grave error and we must do away with it completely.”

This statement is considered one of the milestones in the history of the RSS as it led to the organisation fighting the demon of caste-based discrimination with renewed vigour. During his 21-year tenure as sarsanghchalak, Balasaheb relentlessly campaigned against caste-based discrimination and untouchability. It also points to a personality trait of Balasaheb — that he believed in challenging the status quo.

Dr Shrirang Godbole, one of the most authentic chroniclers of the RSS, recalls an interesting incident. “Once Balasaheb, with some other leaders, was coming down the stairs at Mahal (Nagpur) office. They were going for a programme. As they were getting down, an RSS functionary who was quite old was telling another swayamsevak, ‘We are quite old. Now we can’t change our attitude’. Balasaheb overheard this. He stopped, turned around and told the elder functionary, ‘You should mend till you end’.”

Balasaheb applied the same rule to himself. “Before becoming sarsanghchalak, Balasaheb spoke quickly, not giving too many pauses. He would finish off his lectures or speeches rapidly… Workers like Appaji Joshi brought this to his notice. He started working on this and changed his style of public speaking over a period of time,” said Dr Godbole.

During his tenure as in-charge of Nagpur, Balasaheb displayed his exemplary organisational skills. He is known to have started 15 new shakhas simultaneously. He ensured a steady flow of full-time workers to take the RSS’s work to other states. This helped Dr Hedgewar focus on the expansion of the organisation.

Balasaheb also introduced certain important changes in RSS functioning, which had a long-lasting impact. Before he took over as in-charge of Nagpur, the RSS shakhas used to be held six days a week with Sunday being an off-day. During the holy month of ‘Shraavan’, in addition to Sunday, there was no shakha on Monday as well. Balasaheb introduced activities for both Sunday and Monday and gradually, the RSS started holding shakha seven days a week, 365 days a year, without a break, till today.

In 1938, at the behest of Balasaheb, the first morning shakha of RSS was started at Mohite Bada in Nagpur, where relatively older swayamsevaks started coming. Tatyaji Baviskar was the karyavah of this ‘Prabhat’ (morning) shakha and Baburao Maagh was the mukhyashikshak.

The idea of starting a morning shakha came up as Balasaheb noticed that several RSS workers couldn’t find time to attend the evening shakha as they worked in offices or other business and trade establishments for their livelihood. To keep them engaged with the organisation, the morning shakha was introduced. The ‘Prabhat Shakha’ over the years played an important role in consolidating the RSS network. The activities designed for the ‘Prabhat Shakha’ are relatively less physically arduous than the ones planned for the evening shakha as relatively older swayamsevaks attend the ‘Prabhat Shakha’. Balasaheb can also be credited with starting the ‘Ghosh’ (band) of the RSS and the tradition of recital of ‘group songs’.

As soon as Balasaheb came out of jail after the Emergency, his message was clear — that there should be no vindictiveness. “The credit for the victory has been given to the RSS. It is time for us to be large-hearted. We need to bring change in the hearts of those who did not treat us well,” he said while addressing a mammoth gathering at Nagpur in March 1977.

In 1985, Balasaheb decided to undertake a review of the RSS’s work and determine its future direction with changing times. The occasion was the organisation completing 60 years. In a path-breaking speech in Nagpur that year, he said that though RSS had completed 60 years, the progress is not yet satisfactory and there is a lot more to be done. He gave a clarion call to all the swayamsevaks: “We need to introspect, all of us. It is time to shed all the negativity and chart a new course.”

On 24 March 1989, the RSS and various organisations which were working with it closely held a crucial meeting in Ahmedabad. Those who attended included Balasaheb, H.V. Seshadri, Rajju Bhaiyya, Yadavrao Joshi, Bhaurao Deoras, Ashok Singhal, L.K. Advani, Sunder Singh Bhandari and Dattopant Thengadi, among others. One of the key outcomes of this meeting was that a senior pracharak of the RSS, Moropant Pingley, was entrusted with the task of guiding the Vishva Hindu Parishad (VHP), one of RSS’s affiliates, with a focus on increasing the momentum of the Ayodhya movement.

(The writer is a research director at RSS-linked think-tank Vichar Vinimay Kendra. Views expressed are personal.)